Cold case: What has become of Murphy the donkey?

A volunteer with the Research Centre's official records section recently came across a document in the collection relating to a search for "Murphy" the donkey in the weeks following the Gallipoli campaign.

This post traces the original documentary record, many presented as electronic images for the first time.

Charles Bean, Australia's official war correspondent in 1916, was interested in circulating an item of news seeking the whereabouts of the donkey so famously associated with Pte John Simpson Kirkpatrick. This find was made by our volunteer, Ian Haidon. 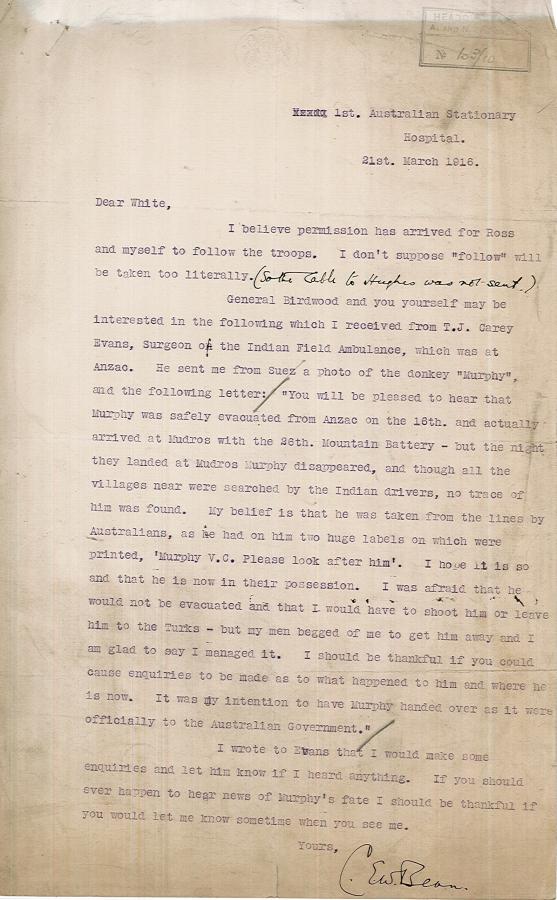 The news and photograph were brought to Bean's attention by the surgeon of an Indian Field Ambulance on Anzac, T J Carey Evans. In this letter, Carey Evans believes Murphy was evacuated to the safety of the Greek island of Mudros, so as not be left to the mercy of the Turks. 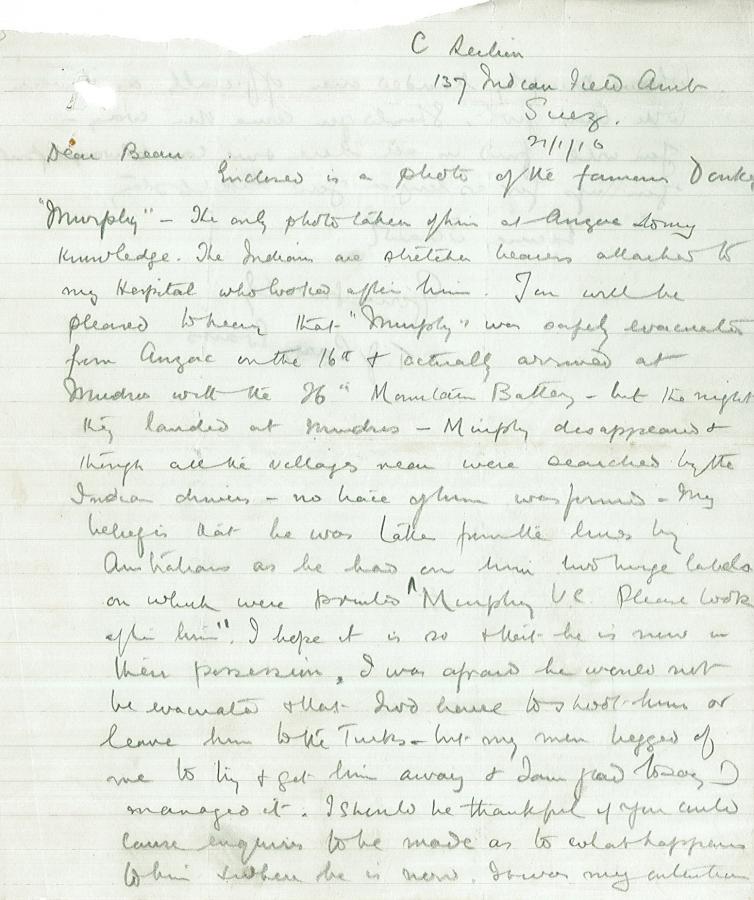 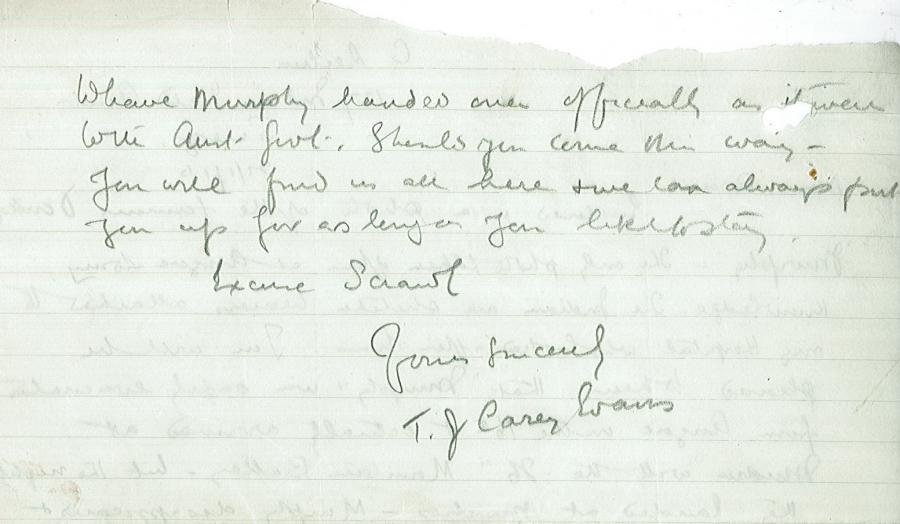 The night Murphy was landed he apparently disappeared, and though a search of local villages was made by the Indian drivers, no trace of Muphy was found. Carey Evans thinks Murphy was taken by the Australians on the island and seeks Beans's help for exploring this possibility.

Bean thought the issue of Murphy's fate sufficiently important to contact the Chief of Staff of the AIF, Brigadier-General Brudenell White, who in turn alerted his colleagues - General's Legge, Cox, McCay, Chauvel, Russell, Walker and Sellheim, indicating how seriously the matter was taken at the time. 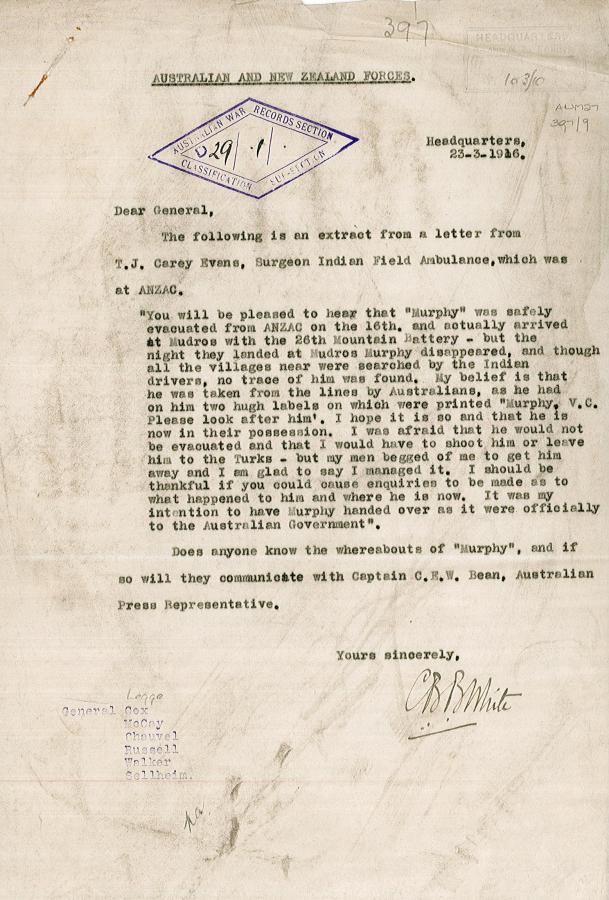 A week later, on 1 April 1916, Bean received a response from a Lt-Col in the 4th New Zealand  Field Artillery Brigade, then at Moascar, Egypt. The letter makes it clear that during a voyage Mudros to Egypt, two donkeys were aboard and though the officer cannot say if one was Murphy,claims an Australian sergeant who was on board took charge on their arrival in Alexandria. 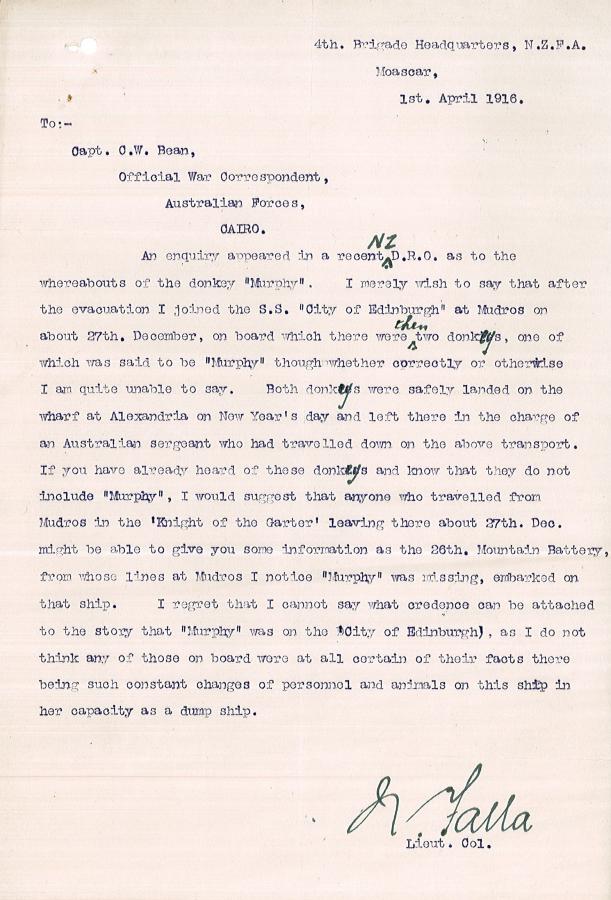 On 5th April, Bean received another piece of correspondence from the New Zealanders, this time the Divisional Artillery Headquarters. This writer also believes the Indian troops on Gallipoli would have evacuated with their mules "as they thought a great deal of them." The unit referredto by the writer was then posted to Mesopotamia which was possibly also Murphy's destination. 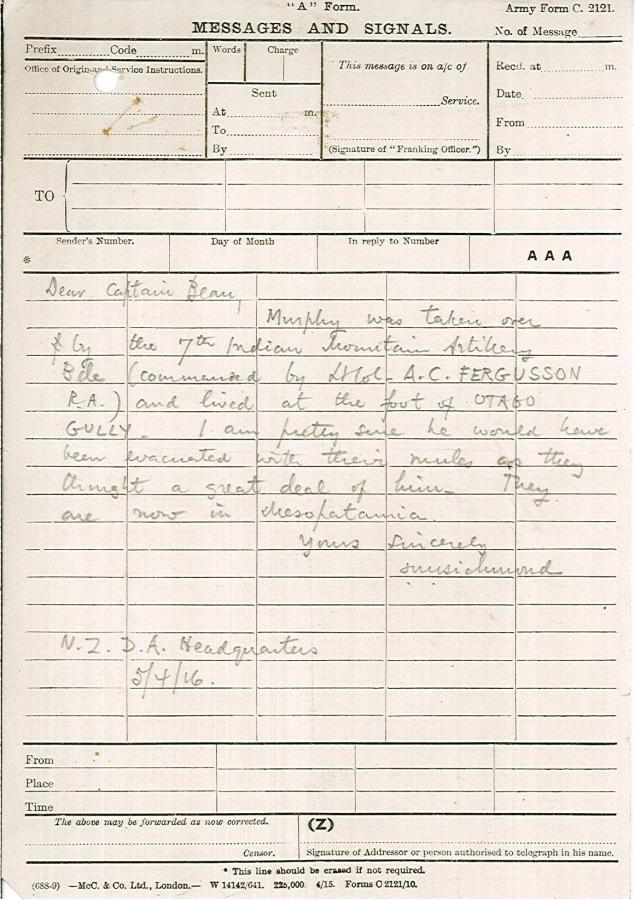 On the same day, Bean was sent a letter from Sgt Prentice of the AIF Headquarters in Cairo. The sergeant suggests it might be useful contacting the No.2 Australian General Hospital, also in Egypt, and support efforts by Bean to get to the bottom of the matter, as "it would be of interest to know how "Murphy" is being looked after." 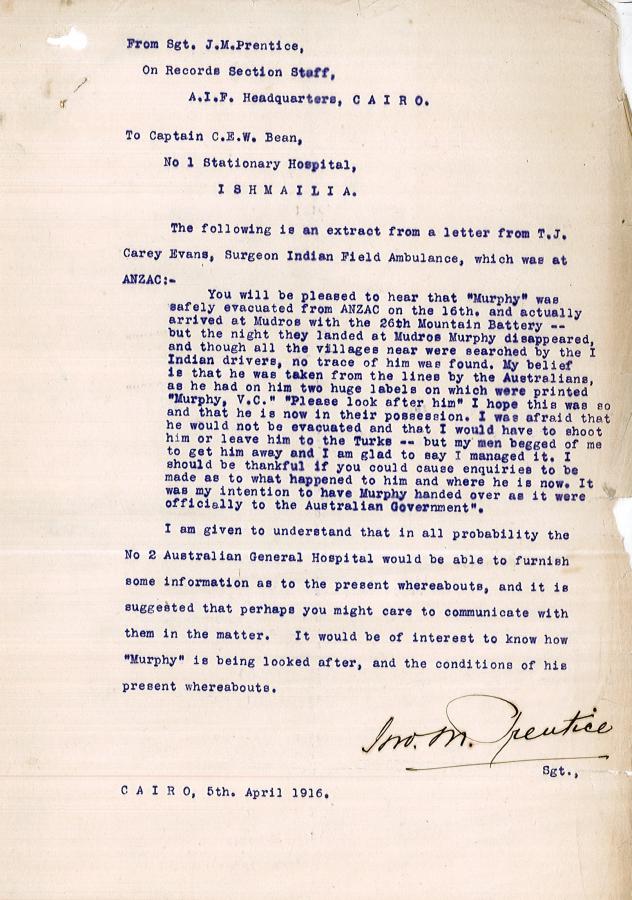 The last comment is an indication that Murphy the donkey was well known and liked among the Australians. Carey Evans recollected a collar fastened by the Australian's on Mudros reading: "Murphy VC. Please look after him."

In 1997, the RSPCA Purple Cross and certificate of award was made to Murphy in recognition of his service. The certificate also extends a mention to all the donkeys used by John Simpson Kirkpatrick for similar deeds. The award is now in the collection as REL25365.

Please visit RecordSearch at the National Archives of Australia to view the official records collection.

Our thanks to Ian Haidon for making this story possible.