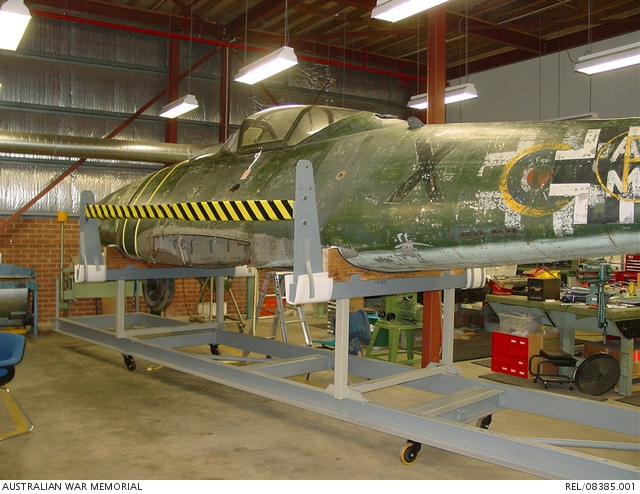 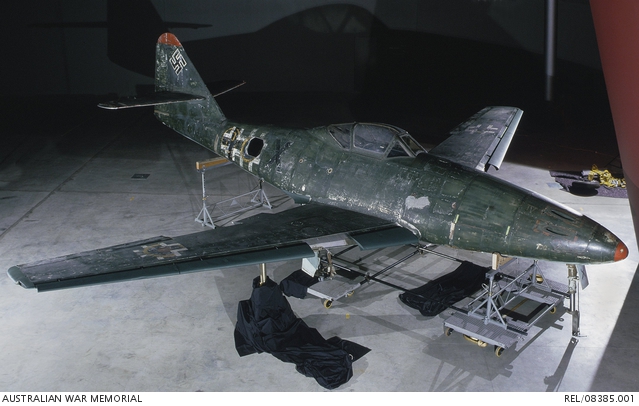 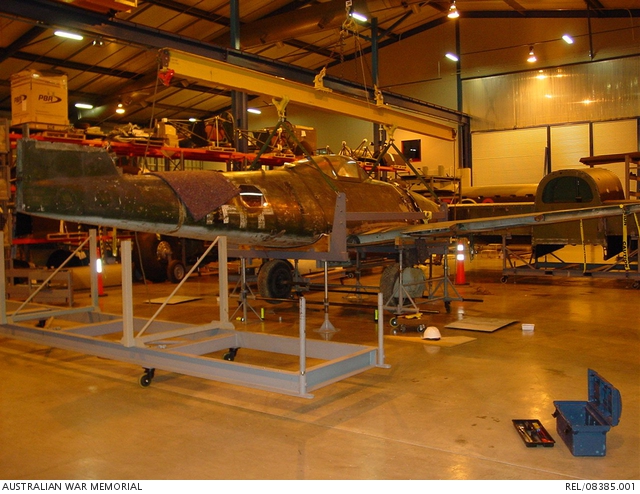 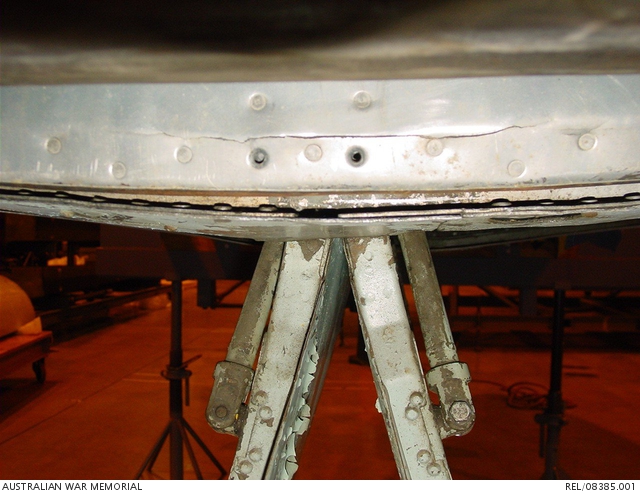 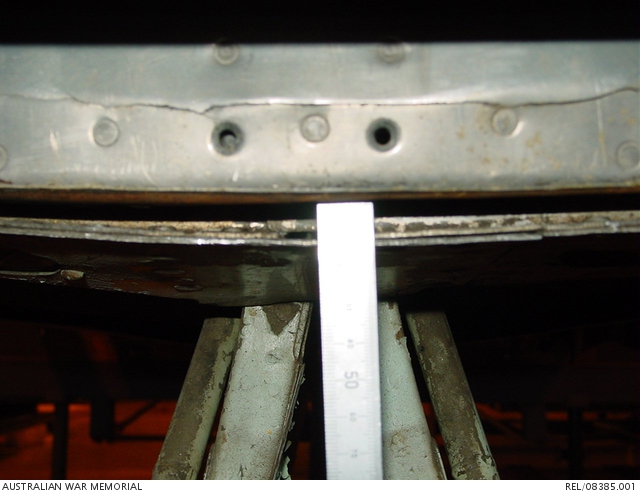 Messerschmitt Me 262A-2, cantilever low wing monoplane with twin axial flow jet engines. All metal, stressed skin construction. Retractable tricycle undercarriage, single spar, one piece wing attached to the fuselage from below. Leading edge slats on wings. The Werk nummer 500200 is marked in black paint on both sides of the lower vertical stabiliser. The aircraft carries its original German stenciling and national markings, together with British 1945 roundels and markings, applied by the Air ministry. Vestiges of a 1955 RAAF colour scheme also exist, notably in the light blue grey applied to the undersurfaces. Both engines are in place, and the aircraft's four MK108 30 mm cannons are mounted. The aircraft's two nose-mounted bomb pylons have been removed, and it is missing a number of instruments from its cockpit, as well as both its Riedel starters. Also missing is the plywood port lower wheel door, and the nose wheel side-opening door. An access panel for the radio on the starboard side, behind the pilot, is also missing. A large ventral exterior panel which would normally be in place under the aircraft in front of the wheel bays is also missing.

The Messerschmitt Me 262 was the first jet fighter in history to enter operational service. Fast and heavily armed, this revolutionary aircraft opened a new era in aerial warfare.

The Australian War Memorial's aircraft was built as a fighter-bomber 'Jabo' version, probably in February 1945, and served with Luftwaffe bomber unit Kampfgeschwader 51 in Germany and Czechoslovakia. Whilst with this unit a large black 'X' was painted on the side of the aircraft fuselage and on the front nose wheel door.

On 8 May 1945, in company with three other Me 262s, the aircraft was flown from Zatec by its pilot, Fahenjunker-Oberfeldwebel Hans-Robert Frölich, to surrender to the Allies. Frölich handed his aircraft to the British at Fassberg, in the Netherlands. A photograph of the aircraft at Fassberg can be seen on the Memorial's collection database as P01605.009.

In late August it was later flown via Melsbroek and RAF Manston, to the Royal Aircraft Establishment in Farnborough, United Kingdom, arriving on 6 September 1945. Whilst in the UK it was assigned a new temporary identity 'AIR MIN 81'. These markings were applied in white paint on the sides of the aircraft over the German markings.

The aircraft was subsequently flown 11 times with the Royal Aircraft Establishment and shipped to Australia, arriving on 22 December 1946. The aircraft was subsequently overpainted, and then displayed at the Australian War Memorial from 1955 until 1970. It was then loaned to the RAAF Museum, Point Cook, Victoria. In 1980, the aircraft's identity was investigated, with sections of the overlying paint being gently removed to reveal the aircraft's original markings and identity including the serial number 500200, the red nose and tail tip; British Air Ministry marking AIR MIN 81 on the fuselage; the original Luftwaffe crosses; and the British roundels.

Black X is the only Me 262 bomber variant to survive, and is the only remaining Me 262 wearing its original paint.