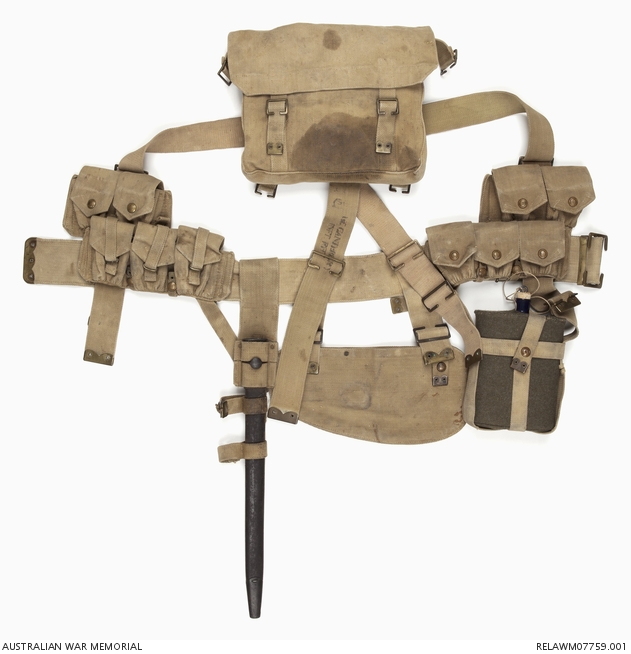 Pattern 1908 webbing waist belt, two shoulder straps and left and right ammunition pouches. The adjustable cotton webbing waist belt has a brass buckle and fittings. At the back are two angled tabs with brass buckles for attachment of the entrenching tool carrier (RELAWM07759.004). The waist belt is marked on the reverse with the maker's details 'M.E.CO [date illegible] L'. The shoulder straps have brass fittings and one is stamped with '1st. CANTERBURY INFT REGT'. Both the left and right ammunition pouches consist of an assemblage of five pockets arranged in a row of two above a row of three. Each pocket has a flap opening secured by double press stud fasteners, except for the lower left pouches which have a brass loop on the end of the flap, with a webbing strap stitched to the bottom which passes through the loop to a press stud on the top of the flap. Each pocket has two internal divisions and are designed to carry three, five round clips of .303 rifle ammunition. The ammunition pouches are fitted with a double hook at each end for attachment to the waist belt, and are further secured by two narrow tabs which pass around the belt and fasten with a press stud on the lower front edge of the pouch. The reverse of the left pouch is stamped 'M.E.CO. 1915. L [broad arrow]', and the right pouch 'M.E.CO. 1916. R [broad arrow]' and '396'.