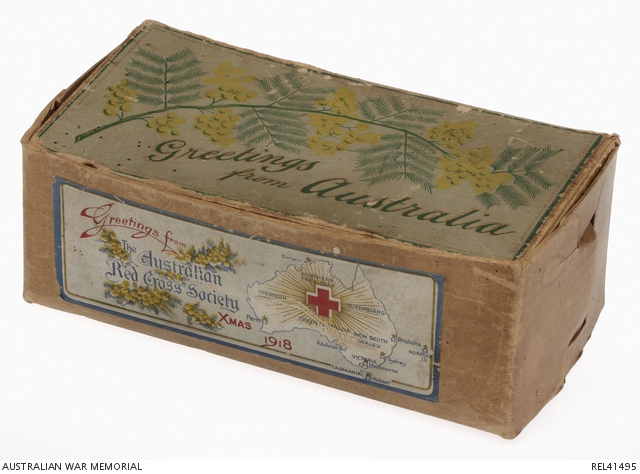 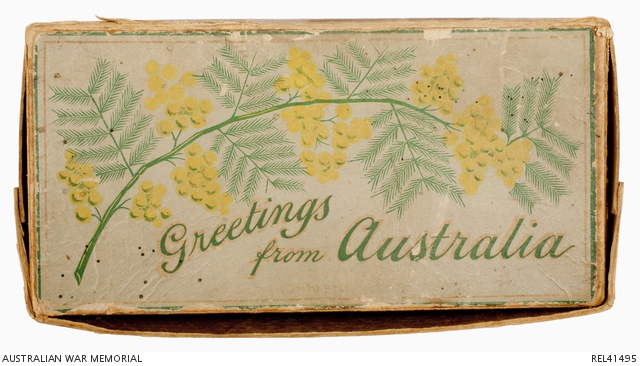 Brown cardboard box for a Christmas gift issued by the Australian Red Cross Society. The box opens at the top and has a colour label on the lid portraying a spray of flowering wattle. The front panel has a label showing a map of Australia with a large red cross at its centre. This label also shows sprigs of wattle with the words 'Greetings from The Australian Red Cross Society XMAS 1918'.

Herbert Vincent Reynolds was in an overseas training unit in Longbridge Derevill, England, when he recorded in his diary that he had been presented with a Christmas package from the Australian Red Cross by General McCay and his wife, on the 13 March 1918. It is assumed that this was in fact a Christmas 1917 parcel, and that the one shown here was given to Reynolds when he returned to Australia in December 1918.

Reynolds was born in 1896 at Sebastopol, Victoria. He enlisted for service in the First World War on 16 September 1914, his 18th birthday. Allocated the service number 622, he was sent to Broadmeadows Training Camp and was allotted to 4 Field Ambulance as a stretcher bearer.