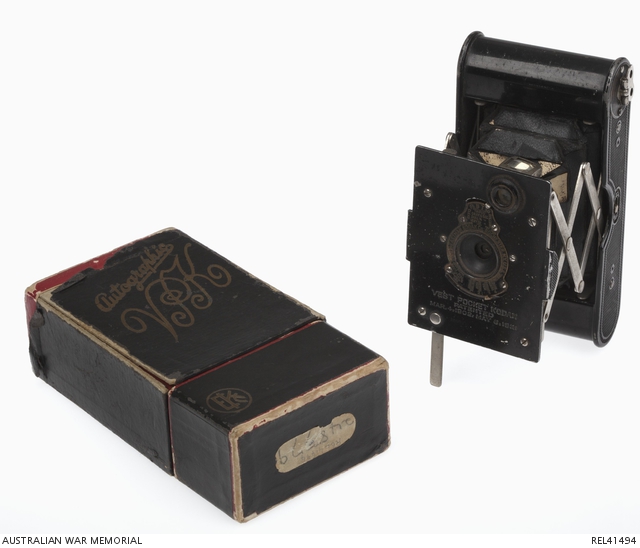 Rectangular shaped Kodak Vest Pocket model Autographic camera. It has rounded ends, a white metal alloy body and has been finished in black. The lens housing is mounted to a blackened white metal plate which is connected by a chromed brass lattice to a collapsible, black paper bellows. Some of the black paper has torn away, revealing brown cardboard. The shutter speed can be altered for clouds, marine view, average view, portrait, moving objects and shadow. There is a swivelling glass prismatic view finder that allows photographs to be taken in landscape or portrait format. At the rear of the camera is an attached, pressed and raised steel disk with an oval shaped, amber coloured viewing window fitted to the centre. Text has been impressed into this raised disc which reads 'U.S. PATENTS MAR 4 1902 MAY 6 1913' Fitted next to the disk is a raised, rectangular hinging panel that has been impressed with the text 'VEST POCKET AUTOGRAPHIC KODAK'. This rectangular panel covers and protects a window which is designed to be scribed onto using the attached steel scribing tool. This process exposes the text onto the negative. Fitted to the underside of the camera is a spool winder and clasp to open and lock the camera body. An empty film spool is fitted to the inside of the camera.

The original box comes in two halves which slide together and is covered in red and black textured paper. On the top of the box embossed in gold writing is 'VEST POCKET AUTOGRAPHIC KODAK'; on the front are 'AUTOGRAPHIC VPK' and 'EKC'. On the bottom of the box is a white sticker with the numbers '248779' written on in pencil.

During the August offensive, Reynolds became ill and on 16 August, was evacuated to Mudros with enteric fever. His illness was so severe that he was transported to England and on arrival was sent to King George Hospital in London. Reynolds recovered slowly and did not return to Gallipoli. While recovering in London Reynolds bought this camera. He was sent back to Egypt in late February 1916 and returned to his unit in early March. In late March, Reynolds and his unit were shipped to France, arriving in Marseilles on 30 March.