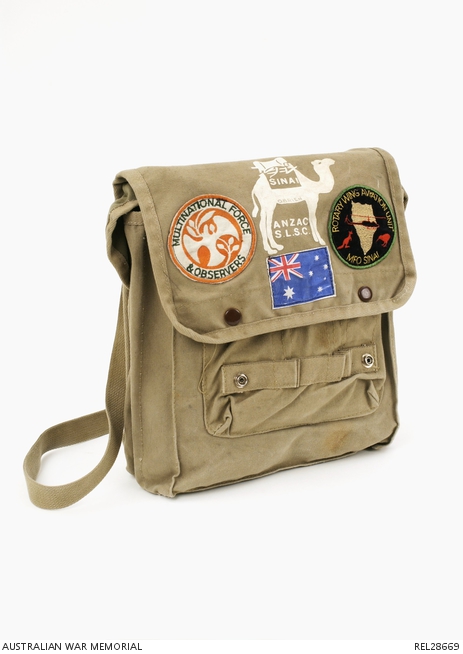 Khaki canvas map and document holdall. The interior of the bag is partitioned into four sections. Three cloth patches are sewn to the outside flap: 'Multi National force and observers', 'Australian flag', 'Rotary wing Aviation Unit MFO Sinai' : There is also a stencilled image of a camel and the words 'SINAI', 'ANZAC' and 'S.L.S.C.'. Two press studs hold the outside flap closed, while a long khaki webbing carry strap is secured to loops sewn to the back of the holdall. Its length is adjusted with two brass buckles.

This map and document holdall was used by A225883 Sergeant (Air) Peter O’Brien, RAAF Loadmaster during his service in the Sinai with the combined Australia/New Zealand Rotary Wing Aviation Unit. O'Brien served with this unit from 11 December 1985 to 17 March 1986. This unit, comprising eight UH-1H helicopters, provided the airlift capability to the Multinational Force and Observers who were monitoring the Egyptian and Israeli cease fire in the Sinai between 1982 and 1986. Normal flying duties included the resupply of observation posts, search and rescue duty, maintenance of helicopters and duty crew.

O'Brien served in the RAAF from 1970 until 1991. He was chosen to be Her Majesty Queen Elizabeth’s Colour Sergeant on the 1977 Silver Jubilee Visit to Australia. O'Brien was also the Commanding Officer 334 Squadron Australian Air Force Cadets in the early 2000s.