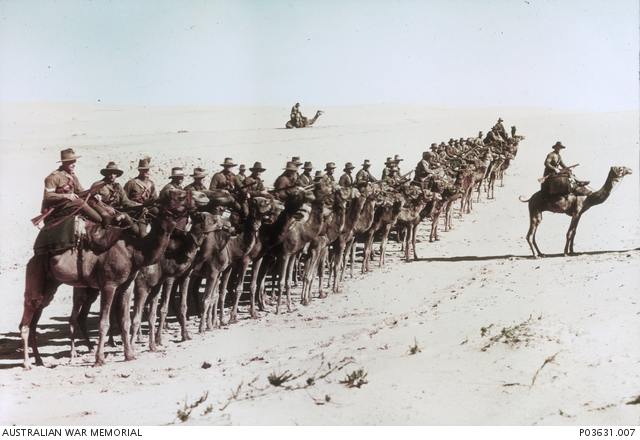 Australians of the Imperial Camel Corps on the sandhills.

Camels were very useful in Sinai and Palestine. Tens of thousands were needed to get water to the soldiers, and they were also good for patrolling in the desert.

Later on they were also used to transport cameliers into battle, whereupon the riders would dismount to fight. They could also carry wounded men on stretchers placed on each side of the animal. Despite their usefulness, the camels were a rough ride, making transportation of the wounded uncomfortable and painful.

The Imperial Camel Corps Brigade was formed in 1916 from British and Commonwealth troops and was attached to the Anzac Mounted Division. There were four regiments: the 1st and 3rd were Australian, the 2nd was British, and the 4th was a mix of New Zealanders and Australians. Each regiment had around 770 men, and at full strength the brigade contained almost 4,000 camels.

Camels were well suited for life in the desert; they could carry around 145 kilograms and go without water for up to five days. Horses were also used by the troops, but required water daily. Initially transported from India and then Egypt, the camels could travel from 4.8 to 9.5 kilometres per hour.

In 1917 the brigade took part in the fighting at Gaza and Beersheba in Palestine. By the following year the country’s harsh terrain had made the camels less effective than horses. No longer needed, the Australian cameliers were transferred to the light horse.

Read the two sources below:

“We were sorry for the camels. Although we often cursed them, when they were to be taken away from us, we found that we had become quite attached to our ugly, ungainly mounts. The Arabs would not treat them as kindly as we had done, and we reckoned they were entitled to a long spell in country that suited them better than the rough and slippery mountain tracks of Palestine.”

You’re an ugly smellful creature;
You’re a blot upon the plain;
I have seen Mohamed beat you,
And it gave me little pain.
You’re spiteful and you’re lazy,
You’d send a white man crazy,
But I reckon you’re a daisy
When the Turks come out again.

Your head is most unsightly,
And so is your humpy back;
I hear you roaring nightly,
When you’re loading for the track.
You’re bow-legged and you’re bandy,
But in this desert sandy
It’s as well to have you handy:
You’re a mighty useful hack.

You shake me something cruel
When you try to do a trot;
I’ve got to take my gruel,
But you make it very hot:
I’ve somehow got a notion
That your humpty-dumpty motion
Is worse than on the ocean,
It’s a nasty way you’ve got.

It’s a sun-scorched land, the East is.
So we need you when we trek.
My old prad a better beast is,
But he’d soon become a wreck.
You thirst a week unblinking,
And when I see you drinking,
You always get me thinking:
Lord, I wish I had your neck. 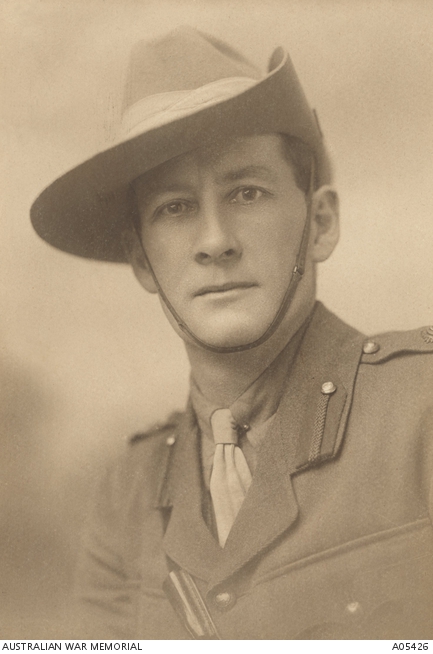 You can listen to four oral histories of Australians who worked with camels in the First World War here: