When Australia became federated in 1901, one of the earliest Commonwealth laws passed was the Immigration Restriction Act. This Act was designed to limit the immigration of people with criminal backgrounds, disease, mental illness, and those from non-European backgrounds. It later became known as the White Australia Policy.

While the legislation did not state that a person could be denied entry based on their race, discriminatory practices favoured immigrants with European backgrounds. Potential migrants were required to take a literacy test (dictation), which at first could only be completed in a European language chosen by the testing officer.

Various amendments were made to the Act, but the test was not removed until 1958, when a new Migration Act was established. Parts of the Immigration Restriction Act were still followed until the Racial Discrimination Act 1975 made it illegal to discriminate against migrants based on race.

1. In what ways were the Chinese population in Australia discriminated against in the nineteenth and twentieth centuries? The following resources may assist:

2. Given the discrimination directed towards them at the time, why do you think people of Chinese heritage wanted to serve for Australia in the First World War?

3. Read the case studies of Richard Wong and The Kong Meng brothers. The families experienced inconsistencies with enlistment, and the assessment of their "non-European origin".

a. Brainstorm some reasons as to why these inconsistencies occured.

b. How do you think families felt, being told one son was not "European enough"?

c. Do you think people with non-European backgrounds were treated differently in their communities after they had served for Australia? Why or why not? Find examples to support your opinion.

4. In the Hall of Memory at the Australian War Memorial, visitors can see 15 stained glass windows. Each window has a quality written below it, which was believed to be demonstrated by Australians in wartime, such as "devotion".

a. Identify the 15 qualities. The following resource will help: https://www.awm.gov.au/visit/visitor-information/features/hall-of-memory/windows

b. Do you believe these qualities are shown by all Australians in war? Why or why not?

c. Can you think of other qualities that service people demonstrate?

d. Select one of the case studies relating to a Chinese Anzac, and identify which qualities they displayed during the war. 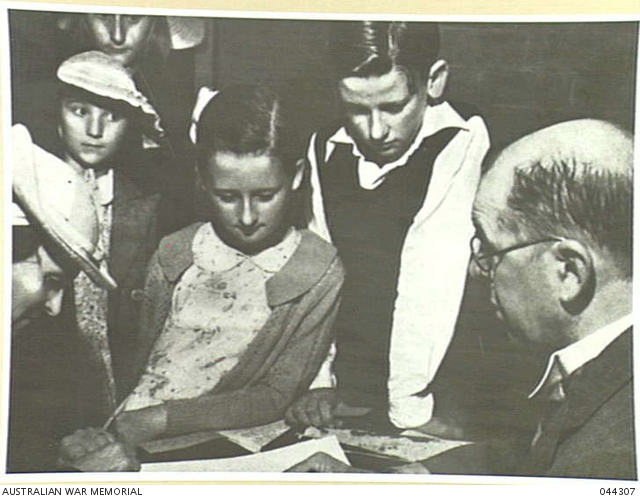 An official speaks with young immigrants on their arrival to Australia, c. 1979.

5. Investigate migration to Australia after the Second World War

a. Why was migration a big issue for the Australian government after 1945?

b. Where were migrants arriving from, and why were they coming to Australia?

c. Choose one fo the following terms, and investigate its impact on migration in Australia: "Japanese war bride" , "populate or perish" , or " Ten Pound Pom".

6. As a class, discuss whether you have family members who migrated to Australia.

a. Where did they arrive from, and why did they come to Australia?

b. Create a visual display showing your classes' family connections to other parts of the world.