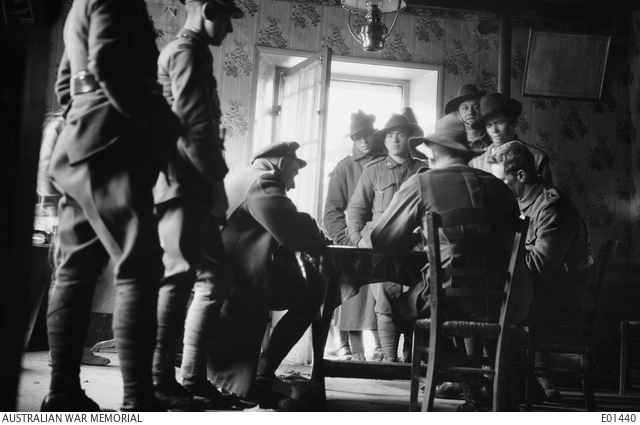 Soldiers voting on the conscription referendum, including Gersh Breitman (standing in front of the table, fifth from left), France, 1917.

In Sydney in August 1915 a young Russian Jew watched hundreds of young Australians enlist. Born in Chechelnyk in Imperial Russia (modern day Ukraine) in 1896, Gersh Breitman had immigrated to Australia in the 1910s and was working as a labourer in Sydney.  Between 1911 and 1914, over 1,000 Russian immigrants arrived in Australia each year. This number included Jewish people who migrated to escape persecution in Russia.

With the outbreak of the First World War in August 1914, Imperial Russia expected all Russian reservists aged 21 to 38 to return home to serve or, if unable to return, to join the armies of the Allied Nations. Gersh wanted to play his part, and decided to enlist in the Australian Imperial Force (AIF). However, to do so he needed proof that he was a Russian subject and therefore an ally of the British Empire. The Imperial Russian Consulate in Sydney approved his identity and Gersh signed the document with an “x”, as he had not yet mastered written English. He was accepted into the AIF in August 1915, and anglicised his name to George Breitman.

After a period of training at Holsworthy Camp, Gersh left Australia with a reinforcement group for the 3rd Battalion in March 1916, destined for the training camps in Egypt. He soon became sick and was hospitalised for nearly two months, and it was not until November 1916 that he re-joined his battalion in France. There, in the trenches near the village of Flers, the Australians spent their winter in some of the coldest temperatures to hit Europe for 40 years.

When spring came in February in 1917 the Australians found the Germans had given up their winter positions and had withdrawn to a more elaborate trench network further to the west. The Australians followed up on their withdrawal, with the 3rd Battalion attacking a German position near the village of Ligny-Thilloy on 2 March 1917. For his actions that day, Gersh was awarded the Military Medal. According to his citation, he:

“Showed himself fearless and quick to act by rushing out from his post to assist 2nd Lieutenant Boileau who had attacked four Germans in the open. By his prompt action he no doubt saved his officer’s life and materially assisted in the capture of the four enemy.”

As the weather gradually improved, the fighting increased, and the loss of life escalated. Gersh was wounded in Belgium later in the year, when the Australians took part in the fighting at Broodseinde on 4 October 1917. He had recurring bouts of sickness that kept him moving between hospitals until he re-joined the 3rd Battalion in March 1918. Now back in France, Gersh was badly affected by German gas and was evacuated to England. After several more months in hospital he returned to France in October, just before the war ended.

After another winter in the trenches, Gersh was admitted to hospital in early April 1919 for the last time. He died a week later on 19 April, as a result of tonsillitis, septicemia, and bronchial pneumonia. He was buried in the Commonwealth War Graves extension in the Willesden Jewish Cemetery in London, where he rests today. Gersh was just 22 years old when he died. He is commemorated on the Roll of Honour at the Australian War Memorial.