John William Blankenberg was one of four sons born to Nathalia Blankenberg in Riga, 1892. Previously a part of Russia, Riga is now the capital city of Latvia. John left home to become a seaman, and served a two-year apprenticeship with the Prince Steam Shipping Company. He shared details of life in Russia with his friends, recounting how one of his brothers was shot, another drowned, and that he believed his third brother and mother died when their village was burnt down.

By 1916, John was living in Melbourne. It was here he enlisted in the Australian Imperial Force (AIF) on 18 January, aged 24. Two months later he embarked for England aboard RMS Malwa. In September, John joined the 24th Battalion in Belgium. The battalion had recently fought in the battles around Pozières and Mouquet Farm in France, and spent the bleak winter of 1916–17 training, working behind the front line, and manning the forward trenches during the coldest winter France had seen for decades. 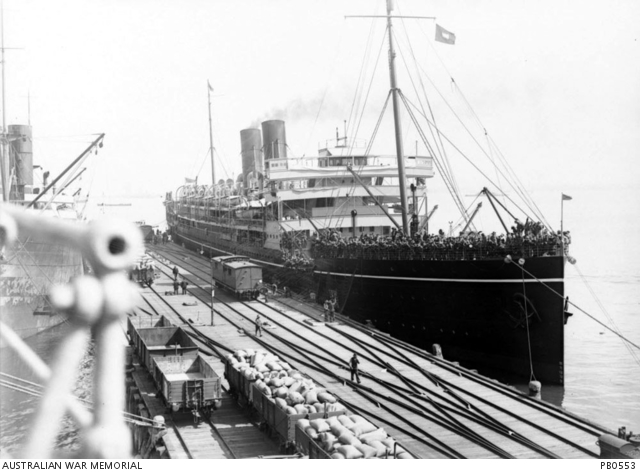 John was admitted to hospital multiple times during his service, suffering from an injured ankle, an abscess on his jaw, and the ill effects from exposure to mustard gas.

On 19 May 1918, the battalion took part in the attack on the village of Ville-sur-Ancre in France. Here, John was awarded the Military Medal for the following action:

“During the attack he was always found in the forefront of the fighting with his Platoon Officer. When the attacking party was temporarily held up and casualties inflicted by an enemy machine gun he threw a bomb into the post and then helped two of our wounded out of danger. When his party advanced again he helped his Officer to rush another post, put the crew out of action and captured a gun. He helped another casualty to the rear, and immediately reported to his officer again. When daylight came and mopping-up began he assisted his officer and another man to mop up another gun crew, thus capturing a second gun. During the whole attack he showed a total disregard of all danger and materially assisted in the success of the operation.”

John continued to serve with the 24th Battalion, participating in well-known battles at Hamel, Amiens, and Mont St Quentin. On 5 October 1918, John was involved in heavy fighting at Montbrehain, the last action involving Australians on the Western Front in the First World War. Reclaiming the town from Germany was a success, but came at a heavy cost of 430 Australian casualties. John was among those killed. He is buried in the Calvaire Cemetery in France.

After John’s death, none of his relatives could be located. In 1924, however, an Australian woman, Miss Arabella Rosevear, wrote to Base Records stating that John used to visit her family's house and "always made our home his home when out of camp". It is possible that John had a close relationship with this family, as Arabella wrote that he wanted her to have his money and other small belongings.