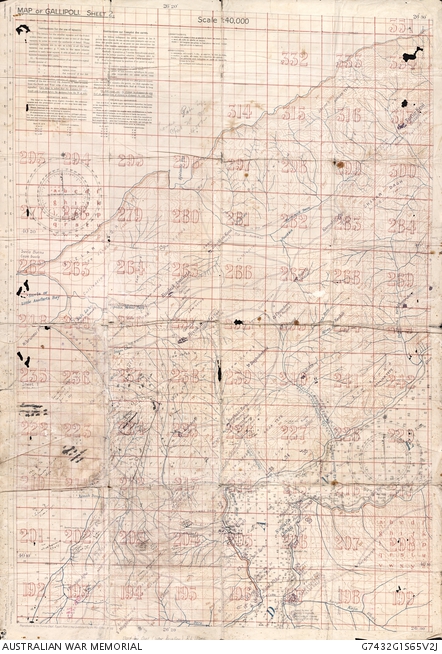 This map of Gallipoli belonged to Captain (later Brigadier General) Raymond Leane. The map is annotated with Turkish defences and is very fragile. Leane was an officer with the 11th Battalion and used the map at the landing at Anzac Cove. He landed north off Ari Burnu at 4.55 am. Upon landing Leane and his men dumped their packs and ran into the scrub. He was one of the first to reach the top of Plugge’s Plateau. Although kept in reserve for a time, his company eventually fought around Pope’s Hill and Courtney’s Post.

On 4 May Leane used this map on a raid of the Turkish positions at Gaba Tepe, where they believed artillery observers were located. They were to note what defences protected the area, destroy communications and destroy any garrisons there. They landed at Gaba Tepe at dawn. As they rushed to the beach they came under intense fire and sought protection from the bank. They could not advance any further and were forced to withdraw.

Later in the campaign, Leane led an attack to capture a Turkish trench in front of Tasmania Post. The captured Turkish trench became known as “Leane’s Trench”

Leane was highly decorated during the war. He was awarded the Croix de Guerre, Companion of the Bath, Companion of the Order of St Michael and St George, Distinguished Service Order and two bars, Military Cross, and was mentioned in despatches eight times.