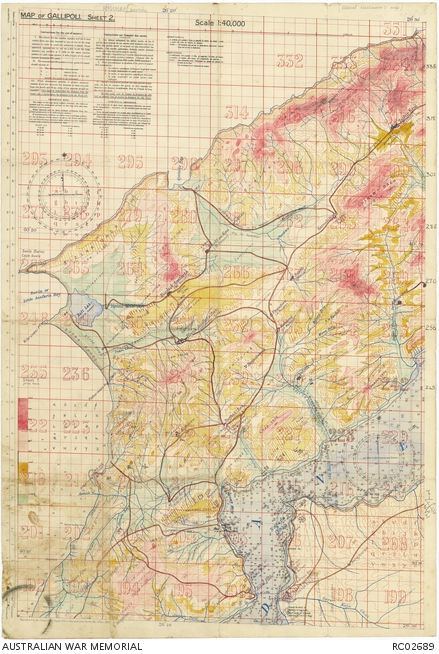 This map of Gallipoli was used at the landing at Anzac Cove by Colonel Henry Maclaurin, who commanded the 1st Brigade at the landing at Gallipoli 25 April 1915. Before the landing he annotated it with Turkish defences and coloured the contours. Maclaurin was born in Sydney on 31 October 1878, and was a barrister in Sydney before the war. He had been in the militia since university and been promoted to Lieutenant Colonel commanding the 26th Infantry Battalion.

Maclaurin was killed on 27 April 1915, standing behind the southern shoulder of the ridge which was later named for him, Maclaurin’s Hill. He was shot by Turkish snipers who had crept onto Russell’s Top during the fighting.

Maclaurin was buried where he fell. His grave was lost after the evacuation of Anzac in December 1915, as his wooden cross was used for firewood by the Turks stationed in the area. It was rediscovered in 1919 by the Graves Registration Unit, with the assistance of Charles Bean who recalled the location of the grave, high above Monash Gully on Maclaurin’s Hill. His body was later reburied in 4th Battalion Parade Ground Cemetery on Braund’s Hill.