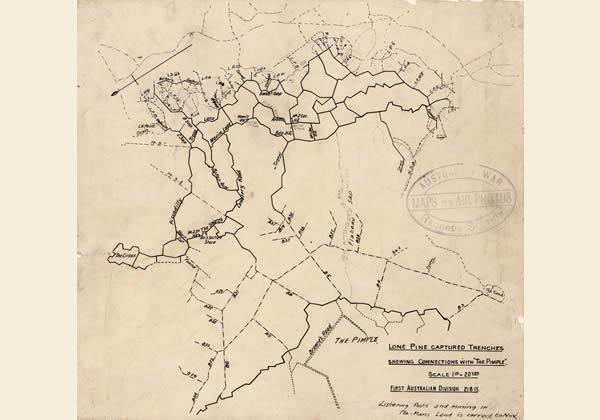 This plan shows the trenches at Lone Pine in late August 1915 and their connection to the position known as “the Pimple”. This copy of the plan has the Australian trenches drawn in black ink. Annotations have been done in pencil, including new trenches and communication saps, along with general corrections. The features drawn in black ink are correct to November 1915. However, the pencilled amendments and corrections may be from a later date.

The plan was drawn by Sapper John Stevenson. Stevenson arrived on Gallipoli on 22 June 1915 as part of the 3rd Field Company Engineers. On his second day at Anzac he felt sick and was evacuated to Egypt with a pain in his left lung and a high temperature. After four weeks recuperating, he returned to Anzac on 25 July.

On 19 August he was ordered, with another sapper, to survey the newly captured trenches at Lone Pine. Although most of the dead had been removed from them, the smell was very strong and the trenches were crowded with soldiers, in case the Turks counter-attacked. Stevenson and his companion had to walk on the soldiers throughout the trenches while they surveyed. The soldiers were so exhausted that as long as Stevenson did not tread on their heads or faces they did not care if they were trodden on.

After working on the plan, Stevenson was commissioned and transferred to the 2nd Field Company Engineers. He supervised further works at Lone Pine and planned to improve the drainage of the trenches for winter. He later worked at Leane’s Trench and Ryrie’s Post before leaving Anzac on 15 December 1915.

The attack on the Turkish trenches at Lone Pine began on 6 August. Lone Pine was one of the Turks’ strongest positions. It was heavily entrenched and in places included roofed trenches covered in pine logs. Aerial reconnaissance before the attack did not show the logs. When the Australian reached the front line they had to assess how to get into the Turkish trenches. Some shot into the trenches through gaps in the logs, others dropped into the trenches through larger gaps or ran past the front line into the communication trenches in the rear and advanced from there.

The fighting was vicious, men fought with bayonets bombs and fists. The dead piled three or four high and the reinforcements ran over them to get to the fighting. Seven Australians were awarded the Victoria Crosses, two of them posthumous awards, for their actions in this battle. The main Turkish trench was taken within 20 minutes of the initial charge but the fighting continued for four days, as the Turks counter-attacked.

The Turks were unable to recapture Lone Pine, although they stopped the Australians advancing further. The dead Australians and Turks were either buried, stacked in heaps, thrown over the parapet, or used to block the Turkish communication trenches along with sandbags and soil. By the end of the battle the Australians suffered over 2,000 casualties and the Turks about 7,000, dead or wounded.