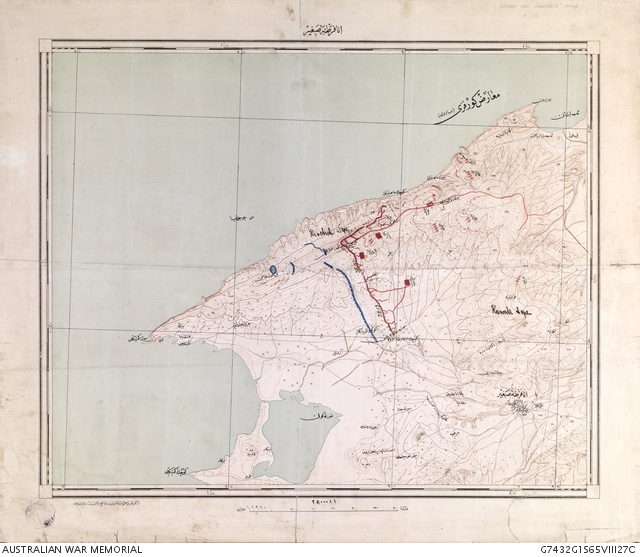 This map shows the Suvla and Anzac areas at Gallipoli. It is annotated with the British front-line trenches (in blue ink) and the Turkish positions (in red ink). Some of the place names have been transliterated from Ottoman Turkish (Arabic) script into Latin script. The words “Dardanelles Herbst 1915 Liman von Sanders” are written on the back of the map. This seems to indicate that the annotations were made between September and November 1915, although they appear to show the Turkish positions as they were in August.

The annotations in red show Turkish divisions, regiments and batteries. The positions of the divisions in the Anzac area match up with the positions the divisions held around 21 August 1915, after the August offensive and the landing of British troops at Suvla. The map shows the change in the allied front line at Lone Pine, after a section of the Turkish trenches was captured by Australians during the fighting of 6–12 August.

The map also shows the position of Turkish troops at Hill 60; however, there are no allied entrenchments here, and the front line is broken in this area, which could indicate that this map shows positions north of Anzac between 12 and 21 August, as Hill 60 was attacked by a cobbled together force of Australians, New Zealanders, British and Gurkhas on 21 August.

There was no opportunity for British forces to advance at Anzac or Suvla, and a cruel winter had closed in. So they were evacuated by the Royal Navy, the last troops leaving on 19–20 December 1915.