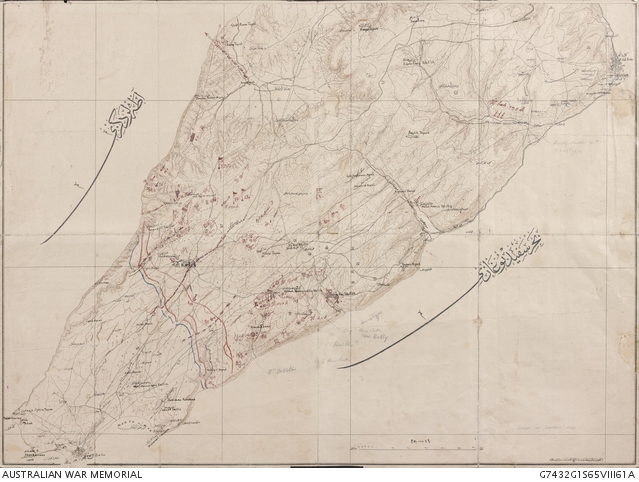 This map covers southern Gallipoli, from Cape Helles to Krithia. On the back is written “ Dardanelles … Sommer 1915 Liman v Sanders”. The map is annotated, showing allied and Turkish front lines, and the disposition of Turkish forces during the summer of 1915 (June to August).

After opposing the allied forces for the first few months of the campaign and suffering many casualties through battles and illness, the Turkish Fifth Army on the Cape Helles front was relieved by troops from the Second Army under the command of Wehib Pasha, the younger brother of Essad Pasha, commander of the Turkish forces on Gallipoli.

The annotations on the map show the positions of the 1st, 10th, 13th and 14th Divisions, and the position of the Second Army headquarters in early August 1915, around the time of the allied assaults in August. In late September and early October, the Second Army was gradually withdrawn from Cape Helles. They were replaced by divisions of the First Army, who were mostly Arab in origin.

There was no opportunity for British forces to advance at Cape Helles, or on any of the other fronts, and a cruel winter had closed in. As a result, the Cape Helles area was evacuated by the British in January 1916.