Out in the Cold: Australia's involvement in the Korean War - Armistice and aftermath

“The day before we were shattering the daylights out of each other, throwing bombs at each other, and the next day it was silent. You come out on the hill and not a shot was fired. It was an eerie experience.”
Private Pat Owen

The end of the war came with the signing of an armistice on 27 July 1953, three years and one month after the war began. The ending was so sudden that some soldiers had to be convinced that it really was over.

It had been one of the bloodiest wars of the century. Nearly four million Koreans and Chinese were killed - more than half the dead were Korean civilians. Australian casualties numbered over 1,500, including 340 dead.

United Nations losses amounted to more than 36,000, most of whom were US servicemen. Belgium, Colombia, Ethiopia, France, Greece, Holland, the Philippines, Thailand and Turkey together lost 1,800 men; another 7,000 men were wounded, of whom almost half were Turks. Throughout the peninsula, a third of all homes and nearly half of Korea's industry were destroyed. Neither side had lost or clearly won the war. Communist attacks on South Korea had been contained, but at a terrible price in human lives.

The presence of Australians in Korea continued with a peacekeeping force until 1957. Meanwhile, the servicemen returning home were greeted by a public that was largely indifferent to their deeds and sacrifices.

With no permanent peace treaty yet signed, tension still exists between North Korea and South Korea. US forces remain stationed in South Korea, monitoring the band of land along the border between North and South Korea, the Demilitarised Zone. Despite the end of the Cold War, there has yet to be a peaceful reconciliation between the two nations. Australia is still a member of the Military Armistice Commission that was set up to continue negotiations between the two halves of Korea.

“Although this purpose was probably far from the thoughts of many of the Australian soldiers, airmen and sailors who fought in Korea or provided support from Japan, the quality of their service helped … to strengthen Australia's reputation as a valuable ally. These were not inconsiderable achievements for a relatively small contingent, but most importantly they helped to demonstrate firmly and clearly in the 1950s, as other Australians had done in two world wars, that aggressors ultimately would not be tolerated by the international community.”
Robert O'Neill, Official Historian of Australia in the Korean War, 1985 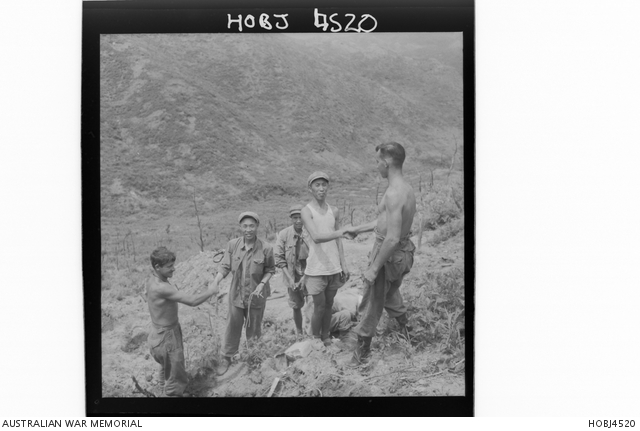 “No one knew I was home from Korea. "What are those medals for?" - they just didn't have a clue, really.”
Sergeant (later Air Vice Marshal) Bill Collings, RAAF

There is a feeling among Australian Veterans of Korea that their war experience was forgotten - either lost in the aftermath of the Second World War or muddled with the beginnings of the Vietnam War. At last the sacrifices of that conflict have been commemorated in a new memorial on Anzac Parade in Canberra, the National Korean War Memorial.

For many Australian service personnel, the memories of their war in Korea continue to stay with them. In remembering his experience, Brian Cooper, MM, recalled:

“I believe the experience I had of war in Korea, at the age of 19 years, had a more profound effect on my personal life and subsequent behaviour than any other event, before or since. That experience shaped my behaviour and personality in ways I think I would have preferred to have avoided, and much of what I was when I returned from Korea is still with me today.”

Desmond Guilfoyle, on a return trip to Korea many years later, gave some thought to his participation in the war:

“Although I have travelled to many countries, I found this trip to be the most interesting, probably because I, in a small way due to my military service, contributed to, then later returned to witness, the miracle that is Korea, a country which has truly risen from the rubble.”

Private P. J. "Banjo" Paterson, 1 RAR, wrote the following poem about leaving Korea, echoing the feelings many Australian veterans of Korea would carry with them forever:

To the Boys we leave behind us

SO LONG, DIGGER
We're off to Aussie, Feller,
And we hate to leave you here.
Gawd, we didn't think we'd part like this
When we started out last year.

Remember the march through Sydney?
We were really glad that day.
We were “going to Korea”
And it had to end this way.
And the days we spent on the Devonshire
Our first long voyage by ship -
We laughed and joked, not dreaming
That this was your 'one-way trip'.
Its still hard to believe that it's happened
That you'll march with us no more
That you've 'grounded Arms' forever,
And have fought your last cruel war.

Yes, we're going back to Aussie, Mate.
And we're going to march again.
And we'll try to make it a better place,
So you won't have died in vain.
And while the band is playing
Our marches, old and new,
We'll swing along there proudly,
Knowing you are marching too,
Yes, you'll always march beside us,
And when our time is through
We'll muster on that “Last Parade”
To march again with you. 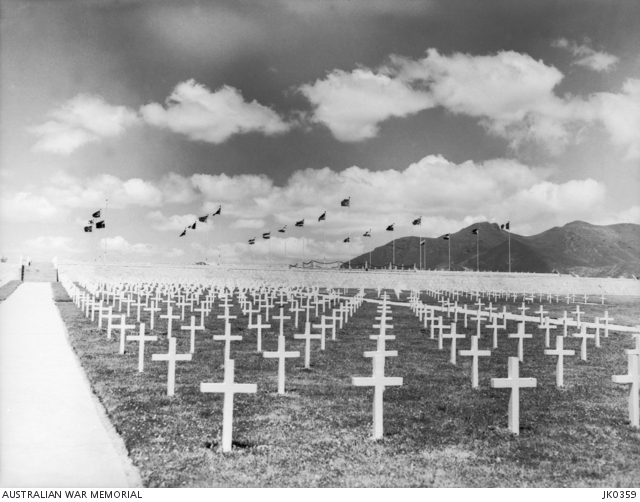 Graves of Australian servicemen who were killed in action in Korea at the
United Nations Military Cemetery at Pusan. 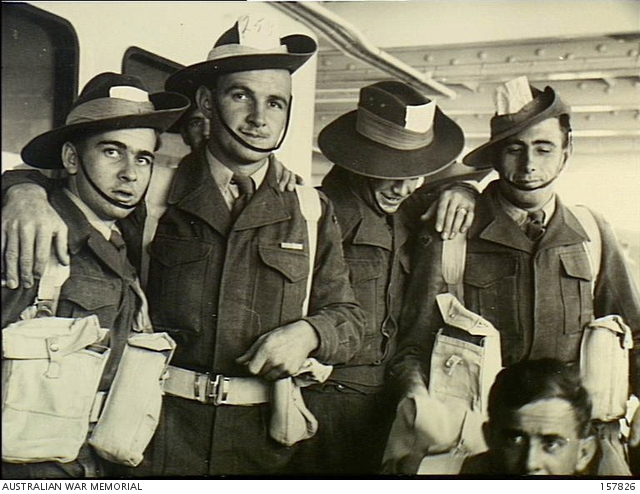 Members of 1 RAR about to disembark from TSS New Australia to return home. 157826 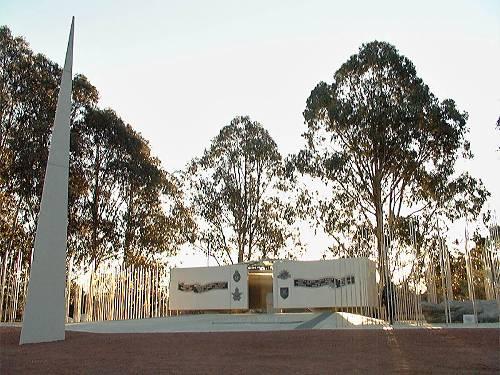 The Australian National Korean Memorial on Anzac Parade in Canberra.

The United Nations service medal (Korea) was awarded for any period of service in Korea during the period 27 June 1950 to 26 July 1954.