Bombs came in a variety of types depending on the target. Among them were air-laid mines, high-explosive bombs ranging up to the twelve-thousand-pound Tallboys and the twenty-two thousand pound Grand Slams, incendiary bombs and target indicators. Some were designed for blast effect, others for penetration. The fusing and loading of bombs was under taken by ground crew armourers. Bombs were delivered under the aircraft on trolleys towed by tractors such as the David Brown VIG 1/462.

The 4-pound magnesium incendiary bomb
One of the most destructive British weapons was the small (1.8- kg) incendiary bomb used in large numbers to create ground fires over a wide area.

The 4,000-pound High Capacity bomb
The 4,000-pound (1800-kg) ‘cookie’ relied on maximum blast effect. These, combined with incendiaries, were the primary weapon of the area bombing campaign.

Target indicator bombs
Target indicators needed to be accurate and highly visible at night. They would burn in bright colours at a predetermined height or on the ground. 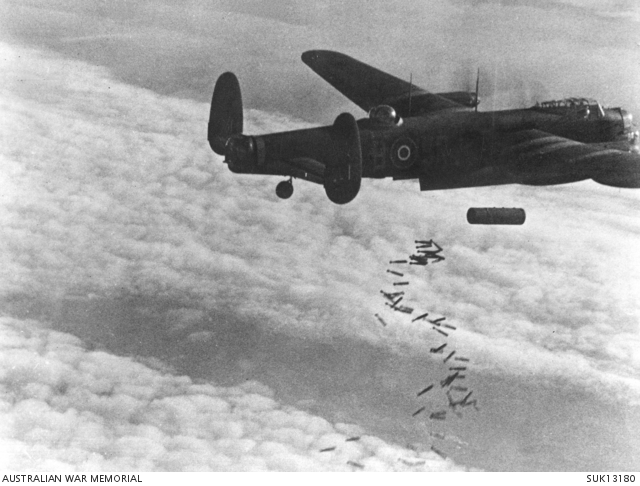 A 4,000 pounder and a shower of incendiaries leave the bomb bay of a Lancaster bomber high over Duisburg during an attack by RAF Bomber Command on that city.