Germany developed and improved its Flak (an abbreviation for Flugabwehrkanone, or anti-aircraft gun) defences throughout the war; and no city was more heavily defended than Berlin. By 1942, 15,000 88-millimetre guns formed the bulk of the German heavy Flak defence. The 88-millimetre gun was an extremely effective weapon when in four-gun batteries and radar assisted. There were larger anti-aircraft guns, especially the 128-millimetre Flak, but the 88-millimetre acquired almost legendary status. Famous for its versatility, it also had a lethal reputation as an anti-tank gun. This example (with its shield fitted) was captured by Australian troops in the 1942 North African campaign. 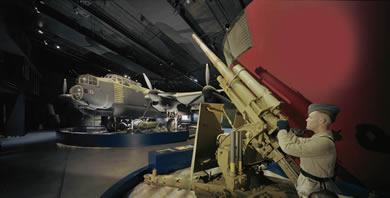