In the Second World War, German forces believed Enigma gave them unbreakable codes. They were wrong.

When Arthur Scherbius patented the Enigma cryptographic machine in 1919, he intended to give commercial companies the means to protect their private telegrams. He almost certainly had no idea of the impact his small, portable machine would have on the world.

As a commercial venture, the Enigma had little success. It did, however, attract the attention of the German military, still smarting from the revelation that the British had read German naval codes for most of the First World War. Enigma seemed to offer a cipher with so many combinations as to be unbreakable. The German military progressively adopted the Enigma throughout the 1920s and 1930s as their principal encryption method. Consequently, other nations could no longer read German messages.

The most common Enigma machine used in the Second World War was, in many ways, simplicity itself. It looked like a small typewriter enclosed in a wooden box. It had a keyboard, a display board, a stecker board similar to an old telephone switchboard, and a choice of five rotors, of which three were installed in the machine. Each rotor had 26 positions corresponding to letters of the alphabet. The rotors were individually numbered, with each rotor wired differently. The rotors were interchangeable: any rotor could be placed in any one of the three positions.

Operating the Enigma was a straightforward - if laborious - process, usually carried out by two cipher clerks. The clerks placed the three rotors and the stecker board plugs in their correct positions; the positions for both plugs and rotors were predetermined and changed regularly. The code clerk typed the clear language message into Enigma and the other clerk recorded the letters displayed. Once encoded, the message was handed to an operator for transmission.

Another Enigma machine decoded the message. With both machines set to the same stecker board and rotor settings, pressing the encoded letter on the keyboard displayed the clear language letter, revealing the decoded message letter by letter. 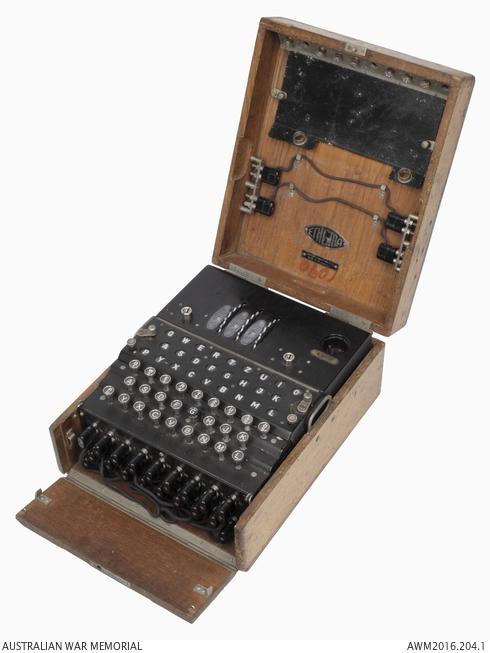 The Memorial's Enigma machine on display in the Second World War gallery.

From the earliest moment that Enigma-encoded messages were intercepted in the inter-war period, Britain, France, Poland and other countries began efforts to break the new German codes. Efforts in Britain and France proved fruitless against the seemingly impregnable encryption. However, the Polish Biuro Szyfrow (Cipher Bureau) received a boost when a misdirected package containing a commercial Enigma machine arrived in Poland by mistake. This provided the Poles with the knowledge of how the Germans encoded their messages. But it gave no clue to the rotors' internal wiring; the number of possible wirings in each of the three rotors, inlet ring and reflector ring seemed endless.

The Poles persevered, handing the problem to three mathematicians: Henryk Zygalski, Jerzy Rozycki and Marian Rejewski. Through their brilliance, the Poles began to read German Enigma traffic by 1933, while the British and French intelligence services still wrestled unsuccessfully with the problem. The Poles were undoubtedly aided by various Enigma documents sold to French intelligence by a German cryptographic service employee in 1931. The French passed copies of these documents to the Poles and British. While they meant little to the British, they played a crucial part in furthering the work in Poland.

In 1939, it was evident that Poland was Germany's next target and the Poles decided to share their knowledge with their allies. It was the breakthrough that British code-breakers needed.

Saddled with the unimaginative title of the Government Code and Cipher School, Bletchely Park was the centre of British efforts to break the Enigma code. With the information provided by the Poles, the code-breakers at Bletchley Park finally had sufficient information to read occasional Enigma-coded messages. However, German changes to encoding methods rendered the Poles' manual method of solving daily encryption settings less and less effective.

The British tried to find automated methods of solving the myriad of possible settings. The result was the "Bombe", a machine that contained the equivalent of 30 (later 36) three-rotor Enigma machines. The Bombe automatically indexed possible Enigma settings until it found a match with German settings. Then Bletchley Park could decrypt messages for the period that the particular setting was in use. It was painfully slow and exacting work; not only finding the daily settings, but then decoding and translating thousands of intercepted messages, most of them routine administration.

Occasionally, Enigma decrypts, codenamed "Ultra" by the Allies, yielded particularly significant information. The secrets of Ultra presented the Allies with a formidable problem: if they fully exploited the information gained from Enigma, they could well expose the source. In turn, Germany would likely tighten - or even change entirely - its coding method, cutting access to this vital source of information. Consequently, Ultra had to be used in ways that would not arouse German suspicions.

Nevertheless, the Germans did become suspicious after repeated sinking of their merchant ships carrying supplies between Italy and North Africa. The RAF appeared to find convoys with ease, and then sink those ships carrying the most needed supplies. Fortunately, the Germans concluded that the information was being sourced from spies within Italian ports, whereas the bulk of information resulted from decrypts of routine Axis radio traffic.

The German Navy also had their suspicions raised by the ability of some Allied convoys to evade submarine interceptions. This time caution prevailed, and the German navy introduced a four-rotor Enigma machine. Despite their best efforts, the Allies were unable to routinely break messages enciphered with this machine, and the flow of information from the German navy shrank to almost nothing.

There is no doubt that Enigma provided the Germans with a high degree of confidence in the integrity of their messages. However, the efforts of many hundreds of analysts, combined with the genius of several mathematicians, exposed the chinks in the Enigma armour. Enigma decrypts, combined with other sources of intelligence, gave Allied field commanders a crucial intelligence edge over their German counterparts.

Mike Cecil is a curator of military technology in the Military Heraldry and Technology Section at the Australian War Memorial.

Born in 1905, Marian Rejewski grew up in Poland and attended the Mathematics Institute at Poznan University. The Polish Cipher Bureau recruited him in 1932, setting him to work on the seemingly unbreakable Enigma codes. Combining available intelligence with permutation theory and brilliant guesswork, Rejewski reconstructed the Enigma rotor connections that resulted in the initial decoding of Enigma messages.

With the invasion of Poland in 1939, Rejewski escaped to France, where he worked at the secret French intelligence unit CADIX in Vichy until the organisation was closed down in late 1942. In January 1943, he escaped over the Pyrenees Mountains to Spain. Transferred to England, he spent the rest of the war working on Enigma decrypts. He returned to Poland at the end of the war and held a number of posts at Poznan University until his retirement in 1967. He died in 1980.