If ever an image could be said to sum up the Australian attitude to the Japanese at the very end of the Second World War, then the photograph of Lieutenant Colonel Murray Robson, commander of the 2/31st Battalion, accepting the Japanese surrender at Bandjermasin is it.

The photographer, listed as unknown but more than likely 7th Division military photographer Corporal Robert Donaldson, captured not only the total subjugation of the Japanese commander, Major General Uno, but also the barely repressed fury of an Australian commanding officer who had spent three years fighting against a savage enemy, and had recently seen many of his own men killed and wounded in the final campaign of the war – one which many at the time felt was unnecessary. Balikpapan was the last large-scale Allied operation of the war, and one of the more costly for the Australian forces. Robson’s 2/31st Battalion had suffered severely and the commander was in no mood to be charitable. 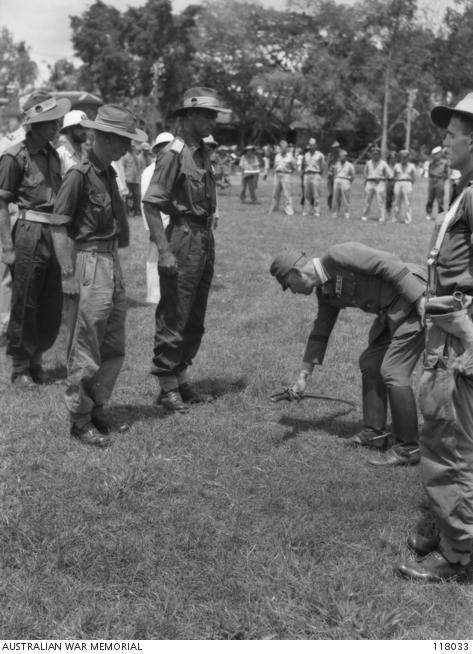 Ewan Murray Robson was born on 7 March 1906 in Ashfield, Sydney. The family were staunch Methodists and well known political figures; his grandfather and father had both been members of the NSW State Parliament. Young Murray attended Newington College then studied law at the University of Sydney before joining the family law firm. After his marriage in March 1931 to Lesley Alison Martin he continued the family tradition by being elected to the NSW Legislative Assembly seat of Vaucluse for the Independent United Australia Party. It was said of him that he possessed a “warm and kindly disposition beneath an unbending exterior”.

At the outbreak of the Second World War Robson enlisted as a lieutenant in the militia before joining the 7th Division’s 2/31st Battalion. He was wounded in the Syrian campaign, where he rose to the rank of captain. By August 1942 the battalion was fighting against the Japanese in New Guinea and Robson was promoted to temporary major. Along with so many others, he suffered from malaria in the tropical conditions. Promoted to lieutenant colonel, leading the 2/31st, in May 1943, Robson distinguished himself at Lae through late 1943: he was awarded the Distinguished Service Order for his resourceful leadership in the field, and mentioned in despatches three times. 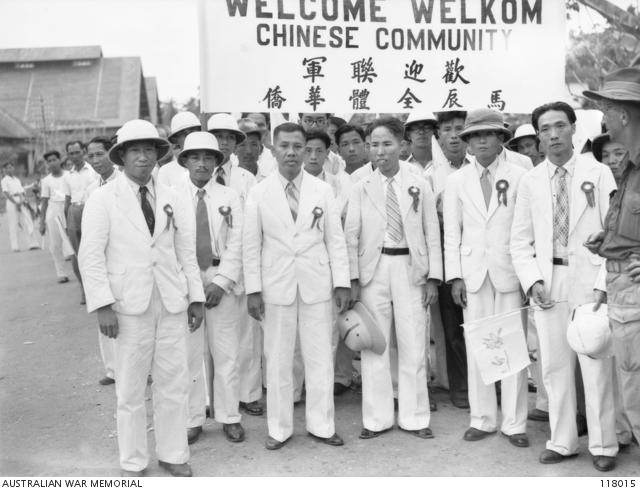 It was not just the Allied military personnel who suffered at the hands of the Japanese. Chinese community leaders welcome the 2/31st Battalion to Bandjermasin.C224660

The 7th Division returned to Australia, and spent 1944 retraining in Queensland, in preparation for the final assault against the Japanese in the Philippines. In the end, however, the 7th Division, along with the 6th and 9th, found itself sidelined, engaged in supplementary campaigns that many felt had little justification. Parts of northern New Guinea, Borneo, and the islands of the Netherlands East Indies still needed liberating, but the Australian army was not going to take part in the major advances further north.

The landing of the 21st and 18th Brigades at Balikpapan in eastern Dutch Borneo began on 1 July 1945 with air raids and artillery support from naval ships offshore. Even so, the Japanese defenders fought tenaciously. Although coming ashore a day later with the rest of the 25th Brigade, the 2/31st Battalion took the brunt of the assault as it moved inland, and losses in this final struggle were high. One officer and 43 men were killed, and four officers and 120 men were wounded. By the end of the campaign the Australians had lost 229 killed and 634 wounded, with the Japanese dead believed to have numbered well over the 1,783 bodies counted. 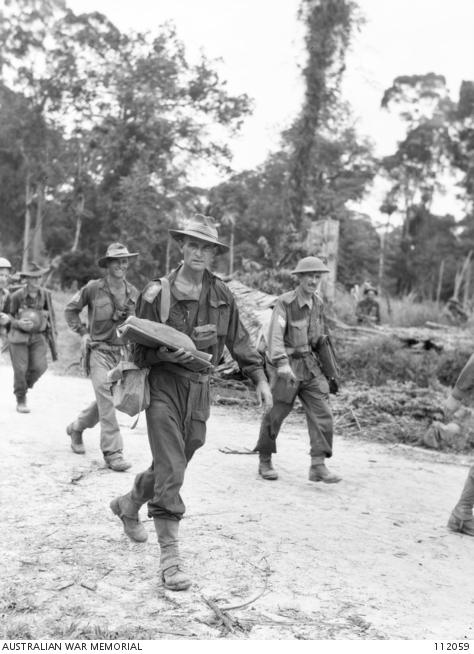 Even more harrowing for the Australian troops were the discoveries of Japanese atrocities towards the local people. Major William Russell, of the 2/14th Battalion, would write later that men from the leading platoon “were feeling [especially] bitter toward the enemy at this time, because on the previous afternoon they had buried a number of native men and women who had been victims of Japanese atrocities and mutilation”.

It took just over a week for the airfields to be secured, but the campaign went on for another month. Even after the armistice there were casualties as many of the Japanese had either not heard that the war was over, or refused to believe it. In the end, only 63 Japanese allowed themselves to be taken prisoner.

The formal surrender of the Japanese military was accepted by General Douglas MacArthur on board the USS Missouri on 2 September, and General Sir Thomas Blamey accepted a further surrender at Morotai a week later. But the nature of the fighting in the Pacific war meant that there were many more isolated forces scattered throughout the islands that surrendered in a piecemeal fashion.

The 7th Division’s 25th Brigade had the responsibility for controlling the Japanese in eastern Borneo, and on 16 September the 2/31st landed at Bandjermasin to take the surrender of Major General Uno and the 2,500 Japanese who had been ruling the 45,000 locals there.

Travelling up river, Robson arrived at the Bandjermasin wharf and began to organise the Japanese troops with the assistance of the chief Japanese administrator. Uno attempted to intervene and negotiate, but Robson refused even to acknowledge his presence. By now, not only had the Australians seen the callous actions of the local Japanese, they were also becoming aware of the wider scale of Japanese atrocities throughout south-east Asia.

On the 17th the surrender ceremony was held at the local sports ground. Robson, ever the politician, made it quite clear where the Japanese stood in the new hierarchy. The 2/31st was formed into a square, with five flagstaffs in the centre. One was shorter than the others and on it flew the Japanese “Rising Sun” flag. This was then lowered and left to lie in the ground in the presence of the Japanese, while the Australian, Dutch, US and Chinese flags were raised. 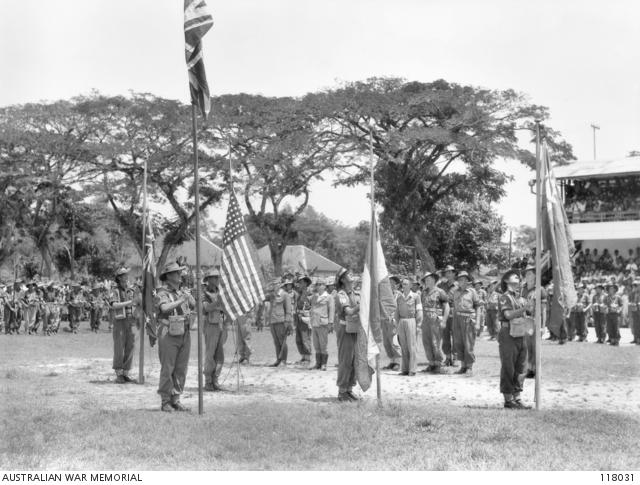 Flags are raised at the commencement of the surrender ceremony. C224733

The tension was amplified by the fact that Uno was being forced to surrender to a lieutenant colonel, an officer well below him in rank. Robson indicated to the parade that the Japanese officer was to place his sword on the ground three paces in front of the Australian. Uno attempted to hand the sword to Robson, but it was refused. Instead he was made to bow as he placed his sword at the Australian commander’s feet. Robson then addressed him through an interpreter: “Do you understand that as our prisoners you will be treated humanely but any disobedience by yourself will be treated immediately without mercy?” 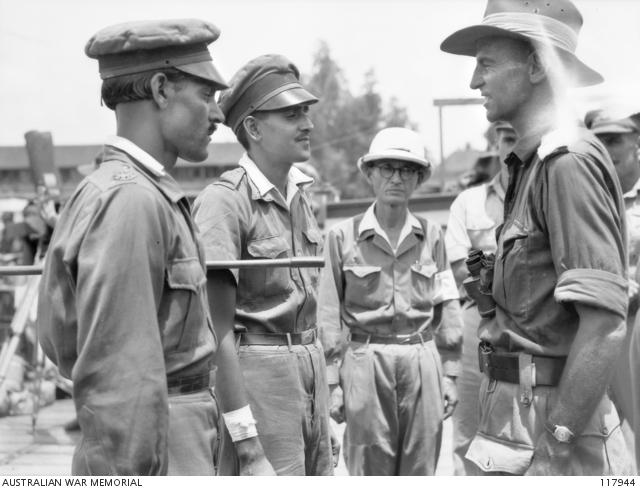 After the surrender had taken place the Australians were given the task of easing the lot of the local people of Bandjermasin who had suffered years of oppression under the Japanese. The hospital was re-supplied and fuel for the electricity generators obtained. As a portent of the future, one of the immediate issues facing Robson was how to control the sudden outpouring of republican and independence sentiment among the local population, still ostensibly under Dutch colonial rule.

In later years Robson, along with many other returned servicemen, found it difficult to readjust to civilian life. He divorced his estranged wife, remarrying in 1950. Although he had been in the army during the tumultuous years that had seen the reorganisation of the conservative side of Australian politics, he re-established his political career in the newly formed Liberal Party, becoming a “swashbuckling and fiery anti-communist”. Seen as someone who might overcome the long Labor domination of the NSW parliament, he was elected state opposition leader in August 1954. However, his brusque manner and moody tactlessness alienated many potential supporters, and after only a year, he was replaced by Pat Morton.

Perhaps Robson’s most significant post-war action was his political support for one of his former NCOs. Sergeant Robin “Bob” Askin, who had been present at the Bandjermasin surrender, would eventually lead the State Liberals out of the wilderness and into power in 1965, for the first time in a quarter of a century.

In 1957 Robson resigned from parliament and returned to his legal practice. He died on 26 August 1974 following a heart attack at his home in Rose Bay.

Eric Carpenter is a historian in the Military History Section at the Australian War Memorial.