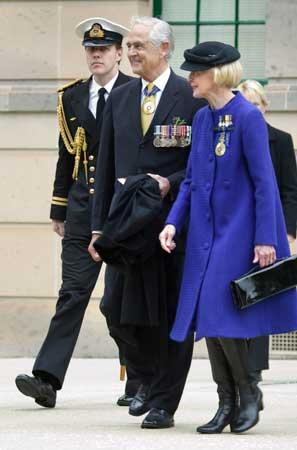 After 16 years, Steve Gower is retiring as Director of the Australian War Memorial. This marks the end of a significant era at the Memorial. Among his many achievements is the founding of Wartime, which he saw as a way to present well-written and informative material to a wide readership. In his Reflections column for Issue 1 in November 1997, an article on the battle of Bribie in Vietnam set him looking back 30 years: in that battle he had served with Delta Company of 6RAR as an artillery forward observer. His later career was to take him to senior command before becoming Director of the Memorial in 1996.

Author and historian Les Carlyon comments: “Those who have worked with Steve Gower agree the experience is never dull; for many, he is a modern Renaissance man. He has the commanding presence of a general, yet it comes with wit and charm and a sparkling turn of phrase, in speech and in print. He has a profound knowledge of military history – and also of cricket.”

Dougal Reed of Cricket ACT reflects on Steve’s role with that organisation. “Steve has been an enthusiastic supporter of youth representative cricket, personally conducting tours of the Memorial that included learning about teamwork, leadership and the ethos and fabric of Anzac. One team member was Nathan Lyon, current Australian spin bowler, and nine other players who have gone on to first class contracts.”

Steve Gower knows his way around Canberra, but he also loves to be out in the bush. He knows his way around the political and bureaucratic salons, yet he hates cant and waffle. He is a first-rate administrator, as former Council member and director of both Boeing and Hawker de Havilland Ken Peacock notes: “Steve provided the leadership and vision to transform the Memorial into a world-class cultural institution with high quality projects, galleries and exhibitions, sound financial management and good corporate governance.” Carlyon sees another side as well: “He refused to be stuffy and never bothered to hide his affection for the Memorial and what it represents. Kipling, you suspect, would have approved: here was one who could walk with kings and never lose the common touch.”

He has never forgotten that, first of all, the Memorial belongs to the people of Australia, to generations past and future. He has also known instinctively what people want to see at the Memorial, what would work and what wouldn’t. Alan Williams of Qantas echoes this view: “Over the last decade, many felt that Steve knocked the dust off a very old institution and successfully brought it into the new century. He has changed and grown the Memorial and made it an even more attractive and inspiring place to visit.”

In his 16 years as Director, he brought in project after project – new galleries and buildings, fresh landscapes and sculptures – all of them coming in on time and within budget. The current galleries demonstrate the breadth of those achievements – the Aircraft Hall, the Second World War galleries, Anzac Hall, Conflicts 1945 to today, the refurbished Hall of Valour. An engineer by training, before he had finished each project he would be planning the next, and the one after that. He inspired loyalty among the staff because, as well as other things, he led by example.

His contribution to the Memorial is not the same as that of its famous originators – it can’t be: their world was different from his. But for many who have worked with him, his stewardship has been as significant as theirs. Charles Bean, John Treloar, and others founded the Memorial and we remember them fondly; Steve Gower has brought it to full flower and made it relevant to new generations, so that today its place in Australian life has never been stronger. This country owes him a great deal.