One hundred years ago, in 1915, Good Friday fell on 2 April. While their families were going to church and preparing fish dinners, the Anzacs stationed in training camps near Cairo, Egypt, went on a rampage. The 'Battle of Wazza' took place in Cairo's red light district. Parts of Derb el Wasa and Haret el Wasser (known affectionately as 'The Wozzer', Wassir, Wasser, Wassar etc.) were gutted. 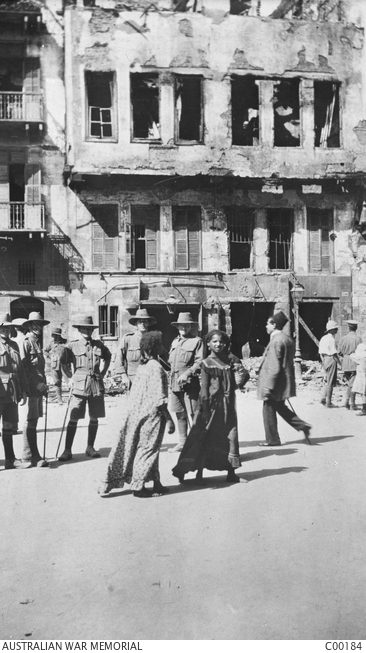 Soldiers and civilians outside a burnt out building in Esbekiah Street, Cairo. April 1915.

During the afternoon and evening of Friday 2 April, the soldiers torched brothels, dragged furniture and mattresses onto the streets and burnt them and fought with the squadron of soldiers and military mounted police who were sent in to quell the fracas.

Peter Stanley estimates that up to 2500 troops were involved. There were 20,000 soldiers on leave over Easter, and some of them would have been in the area observing, encouraging or participating in the riot. 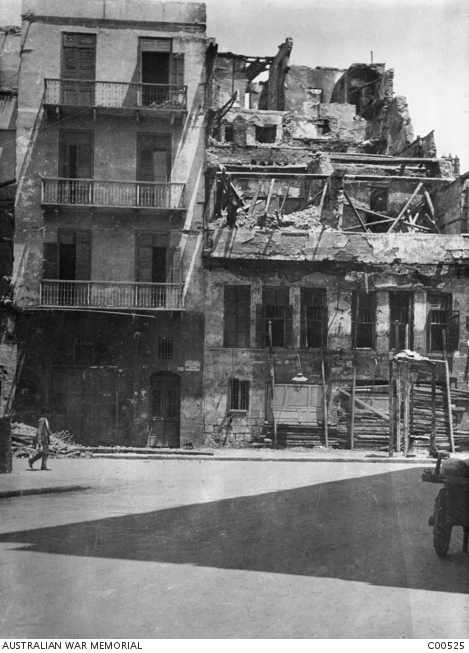 The facade of burnt out buildings after the Good Friday riot.

Sister Alice Ross King was stationed in Cairo and recorded in her diary: "about three people were killed and a few dozen injured - the police driven back, heavy missiles such as tables and big logs of wood thrown." Shots were fired and it was well into the night before the military were able to restore order and the fires were subdued. The nurses were warned not to walk around the town alone or in uniform the next day (see Peter Rees, Anzac Girls, p.30). 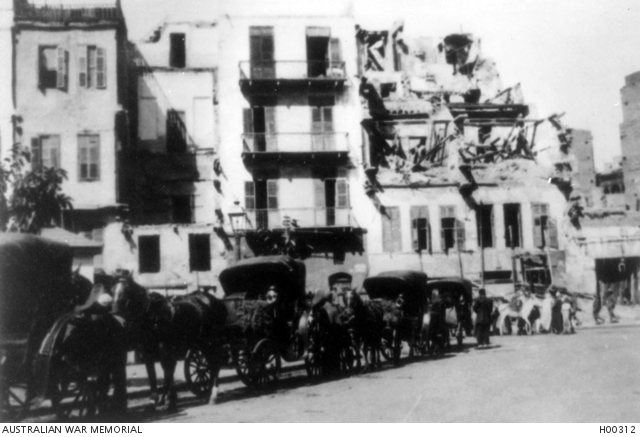 Horse-drawn carriages pass through Cairo after the Good Friday affray.

A Council of Inquiry was held to try and address the reasons the rampage started. In true trans-Tasman sporting fashion, the New Zealanders blamed the Australians and the Aussies blamed the Kiwis. The consensus was that the riot was a reprisal for the spread of venereal disease (VD) (for which Cairo's prostitutes were held responsible, not the men who paid them), misunderstandings about the cost of different sexual services and a rumour that some pimps had stabbed soldiers (see Peter Stanley, Bad Characters, p.36). 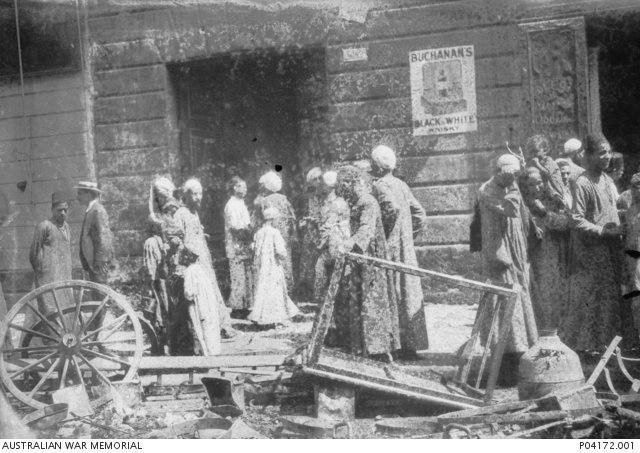 Egyptian men walk amongst the damaged wagons and furniture in a Cairo street after the riot.

VD was rife in the army and was becoming a serious medical and military problem. Early in 1915, about 1000 men in the AIF (Australian Imperial Force), or 10%, were affected - the equivalent of a battalion at full strength. However, as Peter Stanley points out, this was less than the incidence of VD in the urban populations of Paris, Melbourne, London and Berlin (see Bad Characters, p.36).

It was not a military offence to seek the services of a prostitute, but if men contracted VD, they were punished. Their pay was suspended while they received treatment and sometimes the allowances paid to their dependants at home were also halted.  Further, they took up a hospital bed and nursing time that could have been used for a soldier wounded on the battlefront.

Many of the Anzacs training in Egypt were young, impressionable and on their first (and possibly only) overseas adventure. They had 'bags of money' to spend (three times as much as their British counterparts) and were keen to taste the exotic and unfamiliar delights of Egypt.

Charles Bean was so concerned about the temptations awaiting the Anzac novices that he wrote a hastily published guide book for them: What to Know in Egypt.

It warned the soldier tourists to resist the siren call of the "women riddled with disease", and if they could not, to arm themselves "with certain prophylactics". With an estimated 30,000 sex workers operating in Cairo in 1915, condoms were much harder to come by than prostitutes.

When we commemorate Anzac Day, it is important to remember that the soldiers did not suddenly appear on the shores of the Dardanelles, but had a long journey to get there.

Part of that journey involved training in large army camps in the Egyptian desert. 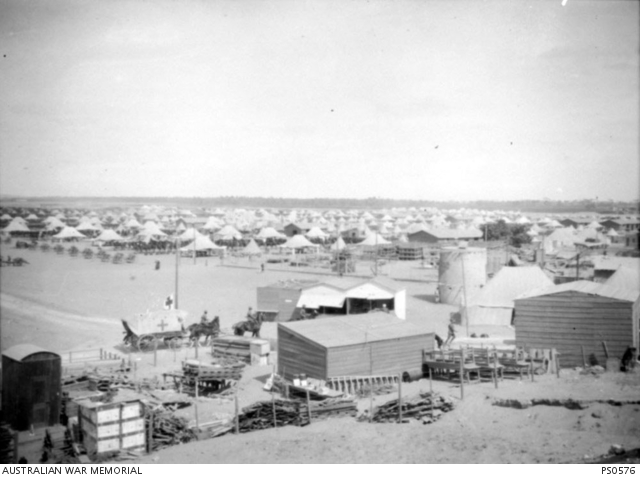 Some highly spirited Anzacs participated in the Good Friday rampage, while others cheered or hid.

The 'spirit of the Anzacs' started well before the landing at Gallipoli on 25 April 1915.