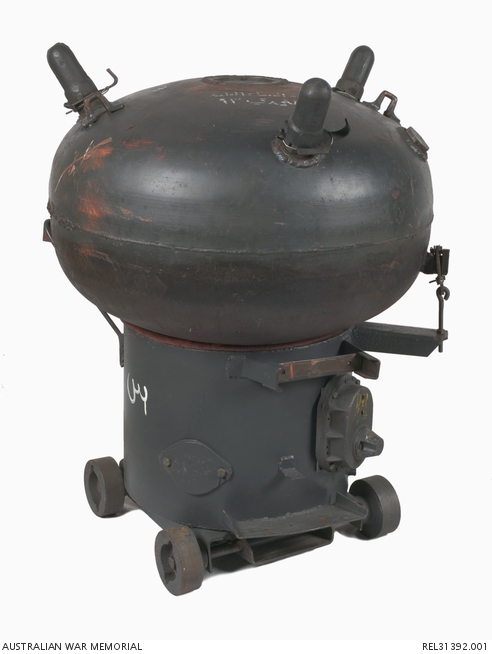 LUGM 145 mine of welded steel construction, with the two halves prefabricated separately and joined around the longituninal seam. It is painted matt green and has Arabic characters stencilled in white on its top surface. The filler plug for the explosive is missing. The mine has three Hertz horns on the top of the casing spaced 780 millimetres apart. These horns contained the acid primers which detonate the mine when dislodged.

The LUGM 145 buoyant contact mine was manufactured in Iraq and is a conventional sea mine that is moored on a chain or drifts on the surface and is set off by contact with a ship. It is ovoid in shape, has three contact horns and contains up to 200 kilograms of explosives. This example was captured by a boarding party from HMAS Kanimbla which intercepted the Iraqi tug Jumariya (also known as 'Jamahoria'). The Jumariya was towing a barge with 48 LUGM mines and was equipped with concealing devices made of hollowed 200 litre barrels. The barrels were lined in rows, simulating a cargo barge and tug. No resistance to the Kanimbla boarding party was reported.