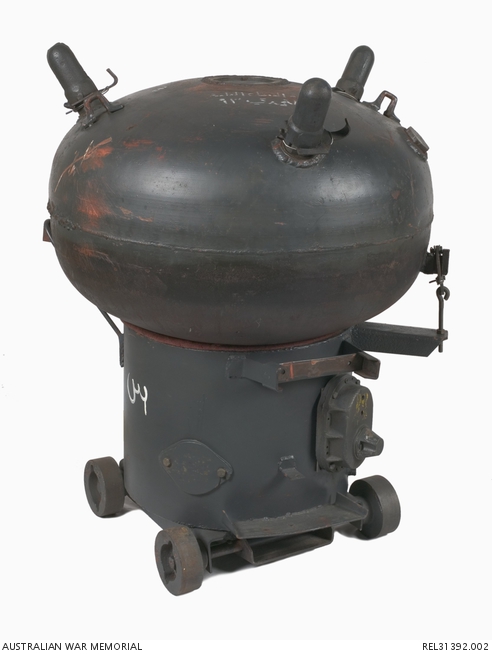 The LUGM 145 buoyant contact mine anchor consists of a cylindrical tube containing a wound wire cable, approximately 30 metres in length, attached to a spindle and winch arrangement. The cable is unwound when the mine floats toward the ocean surface. The anchor box is of metal construction, circular in shape and is painted matt green. There is an orange felt pad around the top edge of the anchor tube which protects the mine from damage while in storage. The box has an Arabic inscription painted in white on the outside as well as the red painted numeral '138'. Four small metal wheels attached at the base of the box are used to role the mine off the back of the mine layer.

The LUGM 145 buoyant contact mine was manufactured in Iraq and is a conventional sea mine, intended, in this case, to be anchored on the bottom and float below the surface until set off by contact with a ship. This example was captured by a boarding party from HMAS Kanimbla which intercepted the Iraqi tug Jumariya (also known as 'Jamahoria'). The Jumariya was towing a barge with 48 LUGM mines and was equipped with concealing devices made of hollowed 200 litre barrels. The barrels were lined in rows, simulating a cargo barge and tug. No resistance to the Kanimbla boarding party was reported.