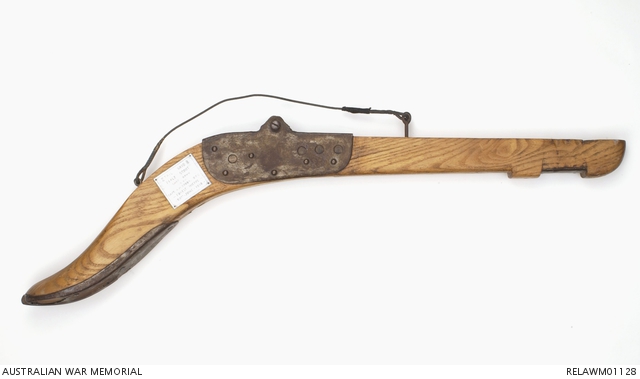 This tail skid was souvenired from a Pfalz DIII Scout by Captain Arthur Henry Cobby, No. 4 Sqn AFC on 19 June 1918. On that day Cobby was approaching the Australian front line at 7000 feet with a formation of seventeen Sopwith Camels. He saw four Pfalz scouts trying to cross the line with the obvious intention of attacking Allied balloons. Three of them turned back on sighting the Camels, but one, piloted by Unteroffizier Max Mertens continued on and dived on the balloon at Hazebrouck. Cobby states "I dived east to cut him off when he saw me and tried to get away, but i got on his tail and put a hundred rounds into him from point-blank range and he crashed into the forest of Nieppe on our side of the lines". On reaching the aircraft, Cobby discovered that there was something extraordinary in the manner of the pilot's clothing. "He was dressed in a swallow-tailed Beaufort coat, very much worn, breeches in a very bad state of repair and very dirty and was without collar or tie. He had not shaved for some days and looked as though he had come off a “bender”. We never discovered the significance of his dress, but he was very much shot about" The wreckage of the D IIIa was given the number G/2Bde/16 and it was reported that the fuselage and uppersurfaces of the wings were painted black and dark green, with the undersides silver.