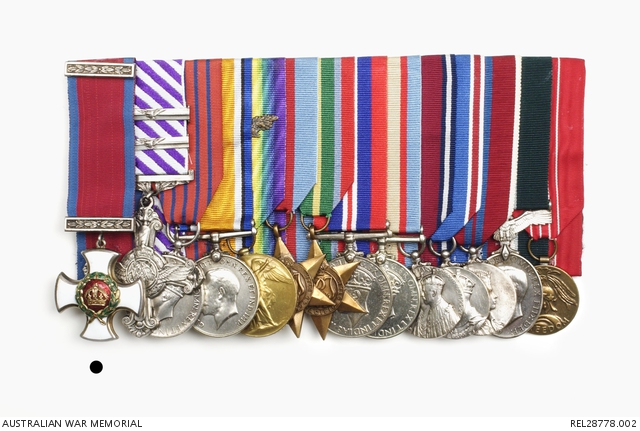 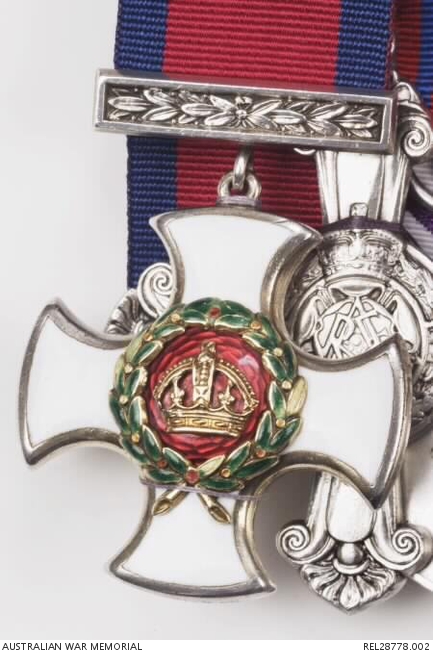 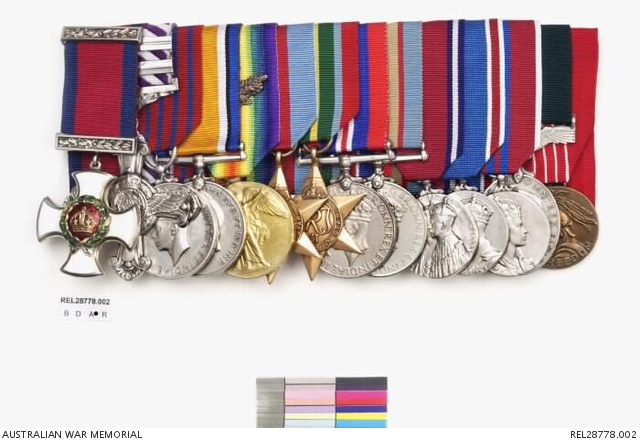 Associated with the service of Captain Arthur Henry 'Harry' Cobby. Cobby was born in Prahran, Victoria on 26 August 1894 and was a bank clerk on enlistment in the AIF on 23 December 1916. Cobby applied for, and received, a commission as a second lieutenant in the Australian Flying Corps (AFC), which was part of the AIF at the time. He had previously gained a commission in the militia. Cobby embarked from Melbourne, Victoria, with 'A' Flight, 4 Squadron for England on 17 January 1917 aboard RMS Omrah.

He arrived at Plymouth on 27 March, and then to France on 18 December. By September 1918 had shot down 29 aircraft and 13 balloons, becoming the highest scoring ace in the AFC.

By the end of the war Cobby had been awarded the DSO and DFC with two bars, as well as being mentioned in despatches. The citation for his DSO reads: 'At 5.15 pm on the 6th instant. Captain A H Cobby, DFC, after flying above the clouds under very unfavourable weather conditions dived down and found himself over LAVENTIE where he attacked and destroyed with bombs and machine gun fire from 200ft, a train moving in the direction of ARMENTIERES. On a second flight the same evening he caused casualties amongst some transports near ESTAIRES from an altitude of a few hundred feet and brought down a hostile two seater machine by BAC St. MAUR. On the morning of the 7th inst. Captain Cobby brought down an enemy scout in flames, and caused casualties amongst troops and transport on the roads from a height of 250ft. Later the same day Captain Cobby brought down another hostile machine. On the 14th instant at 6.00 pm Captain Cobby attacked parties of troops in LESTREM and caused casualties amongst men salving one of our crashed machines near LAVENTIE. Several were seen to fall, and the remainder scattered for cover. One wing of the machine they were salving caught fire. On the 15th inst. Captain Cobby attacked WAVRIN aerodrome from low altitude, securing a direct hit with a bomb on one of the hangars.' 'On the 16th inst. he led a large organised force on HAUBORDIN aerodrome. He secured direct hits with all his bombs from a height of under 200 ft., on hangars on the aerodrome; one of these hangars immediately burst into flames, and the one next to it shortly afterwards caught fire. He fired 100 rounds at a hostile machine which was standing out on the aerodrome; this machine immediately caught fire. He fired 600 rounds of machine gun fire into parties of mechanics and troops, causing an appreciable number of casualties. All this work was done from an altitude of between 50 and 200 feet.

On the 17th August 1918 he again led an organised raid on LOMME aerodrome. He set fire to 2 hangars by means of his bombs, which he dropped from a height of under 200ft. He fired 600 rounds and dropped one bomb on machine gun detachments, anti aircraft batteries and on workshop sheds, officers and mens quarters etc. The success of these two raids is largely due to the determined leading of this officer, who brought the squadron down to extremely low altitude over hostile aerodromes, and remained there for upwards of half an hour.'

Cobby was then posted to England as an instructor before returning to Australia in 1919. He was discharged from the AIF on 24 July. In 1921 Cobby became a foundation member of the newly formed RAAF, resigning in 1936 with the rank of wing commander. When the Second World War began, Cobby returned to the RAAF and served in a number of capacities. In March 1944 he was awarded the George Medal for rescuing survivors of an air crash in which he had been involved as a passenger. On 30 November he was awarded the Commander of the Order of the British Empire for 'Most distinguished service and devotion N. EASTERN area.' Post war, Cobby resumed his career in civil aviation. He died suddenly on 11 November 1955 and was accorded full military honours at St Mary's Church of England, Caulfield.