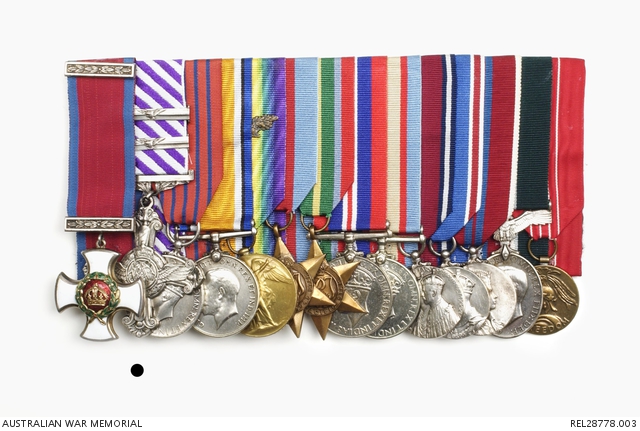 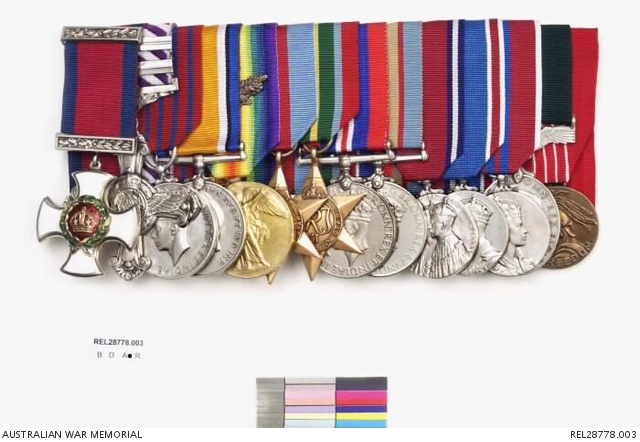 Associated with the service of Captain Arthur Henry 'Harry' Cobby. Cobby was born in Prahran, Victoria on 26 August 1894 and was a bank clerk on enlistment in the AIF on 23 December 1916. Cobby applied for, and received, a commission as a second lieutenant in the Australian Flying Corps (AFC), which was part of the AIF at the time. He had previously gained a commission as a second lieutenant in the militia, when he served with the 46th Infantry Battalion (Brighton Rifles) on 1 May 1914, before transferring to the 47th Infantry Battalion on 1 July 1915. Cobby embarked from Melbourne, Victoria, with 'A' Flight, 4 Squadron for England on 17 January 1917 aboard RMS Omrah.

Arriving at Plymouth on 27 March, Cobby was sent to Castle Bromwich for training. After learning to fly Sopwith Camels he arrived in France with 4 Squadron on 18 December. He shot down his first enemy aircraft on 3 February 1918 and by September had shot down 29 aircraft and 13 balloons becoming the highest scoring ace in the Australian Flying Corps.

Cobby was awarded the Distinguished Flying Cross (DFC) on 7 June 1918, in recognition of acts of gallantry and distinguished service. He had originally been recommended for the Military Cross, with his recommendation reading: 'On 21st May, 1918, Capt. Cobby attacked an enemy balloon near NEUVE EGLISE and destroyed it.

On 30th May, 1918, when engaged on the same duty, he destroyed another balloon near ESTAIRES, directly afterwards he was attacked by three Albatross Scouts, one of which he shot down, the machine falling S. of ESTAIRES. On 1st June, 1918, Capt. COBBY shot down a third balloon to the N. Of ESTAIRES, following it down to 2000 feet until it burst into flames.

On 1st June, 1918, when leading an Offensive Patrol, Capt. Cobby shot down an Albatross Scout, which in falling fouled the cable of an enemy balloon; the left hand wing was torn off, the machine falling near MERVILLE.

Previous to joining this Brigade, Capt. Cobby destroyed hostile machines on the 21-3-18 S. of BREBIERES, on the 30-3-18 S.E. of ARRAS, and on the 9-4-18, near ESTAIRES.
A bold and skilful Patrol Leader, who is setting a fine example to his Squadron. '

Cobby was recommended for a bar to his DFC on 28 June with his citation reading: 'On 17.6.1918, when on Offensive Patrol E. of LAVENTIE an engagement took place with five hostile Scouts. Capt. Cobby shot one down, its wings coming off in the air.

On 19.6.1918, when engaged on a similar duty over the FORET DE NIEPPE, Capt. Cobby saw a Pfalz Scout about to attack one of our balloons; he engaged and destroyed the machine, which fell in the Forest.

On 25.6.1918, an Offensive Patrol, of which Capt. Cobby was a member, engaged an enemy formation between ESTAIRES and LAVENTIE. Capt. Cobby destroyed one.

On 28.6.1918 Capt. Cobby was on Wireless Interception duty, and he shot down a Phalz [sic] Scout, in flames S.E. of ESTAIRES. Later in the day he destroyed a HALBERSTADT two-seater N.W. of MESSINES.

A bold and skilful leader, whose example has had a marked effect in his Squadron. He has now destroyed fifteen enemy aircraft.'

On 16 July Cobby was recommended for a second bar to his DFC. The citation for this award read 'At about 5.25 pm on the evening of the 15th inst. Captain A.H.Cobby DFC, saw 5 Pfalz Scouts at about 6,000 feet in the neighbourhood of ARMENTIERES. Although Capt. Cobby was only accompanied by one other machine and although he was outnumbered by 5 to 2, he immediately attacked, and succeeded by brilliant flying in destroying 2 of the enemy machines, one in flames and one which broke up in the air.

Meanwhile the officer, Lieutenant Watson, who was accompanying Capt. Cobby, brought a third machine down out of control. While still engaged in this combat, they were attacked from above by 5 more hostile Tri-planes, the superior height of which gave them every advantage over the 2 British machines, which had descended to a low altitude while engaged in the previous combat. By cool judgment and fine flying, Capt. Cobby succeeded in evading this new attack, and returned over our lines with the accompanying machine, both undamaged. Capt. Cobby has destroyed 2 balloons and 3 enemy machines within the last 4 days and has succeeded in destroying a total of 21 hostile machines or balloons.

This officer at all times sets a wonderful example to other pilots in the squadron, and has only succeeded in destroying so many machines by hard work and by using his brains, as well as courage and brilliant flying.'

Both bars were gazetted on 21 September and by the end of the war Cobby had also been awarded the Distinguished Service Order as well as being mentioned in despatches. Returning to England as an instructor Cobby was still trying to rejoin a combat unit when the war ended. He led the AFC fly-past over London on ANZAC Day 1919 before returning to Australia the following month. He was discharged from the AIF on 24 July.