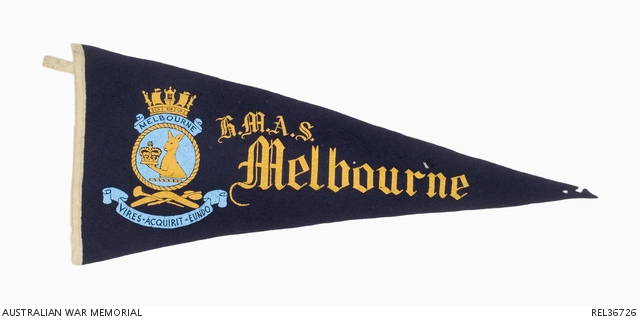 Triangular blue felt pennant with two white suspension loops at hoist, one is damaged. Screen printed in yellow, and azure the ships badge shows a yellow kangaroo proper holding St. Edwards Crown with an azure background. A rope circle encompasses this, surmounted by the Naval crown and 'MELBOURNE' in scroll work. Underneath is a boomerang and two clubs, beneath is MORE scroll work and the motto 'VIRES ACQUIRIT EUNDO'. 'HMAS MELBOURNE' is printed is to the right of the badge.

This pennant was made as a souvenir for the crew of the HMAS Melbourne (II). HMAS Melbourne (II) is a Modified Majestic Class Light Fleet Aircraft Carrier. It was laid down on 15 April 1943, under the name HMS Majestic and launched 28 February 1945. She was nearing completion when construction was virtually brought to a halt at the end of wartime hostilities. In 1947, Australia decided to acquire two aircraft carriers. Two Majestic class vessels, HMS Terrible and HMS Majestic, were acquired and renamed Sydney and Melbourne respectively. On 28 October, 1955 the ship was officially named and commissioned into the RAN as HMAS Melbourne.