Enlist in the Sportsmen's Thousand 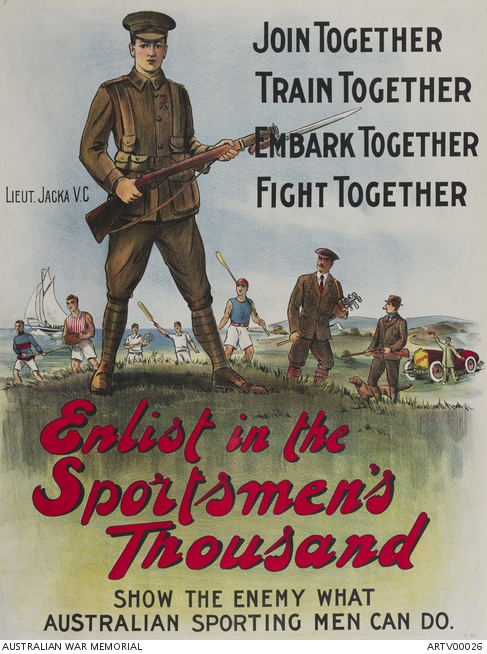 Representative of two common recruiting devices used in Australia, a well-known local soldier and a target number of men required for a specially named group. Both themes were combined, too, as in the case of Ryan's Thousand (after T.J. Ryan, the Queensland premier) or Carmichael's Thousand (after Captain A.C. Carmichael). This poster, published by the State Parliamentary Recruiting Committee, depicts Lieutenant Albert Jacka, VC, as a role model for a huge campaign to enlist sportsmen into the Australian Imperial Force in 1917. Jacka achieved instant fame back home when he became the first Australian to win the Victoria Cross during the First World War. It was said that one of the reasons he was such a good soldier, and had such a fighting attitude, was that he had been a boxer before the war. The campaign to enlist sportsmen was fuelled by a strong belief that by playing sport young men developed specific skills and qualities that could be used on the battlefield.