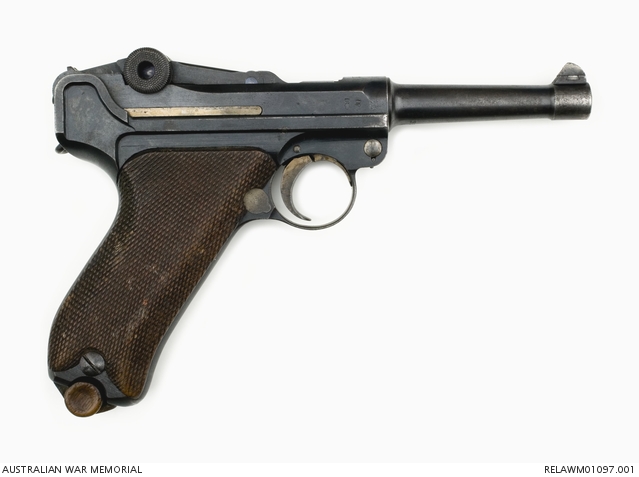 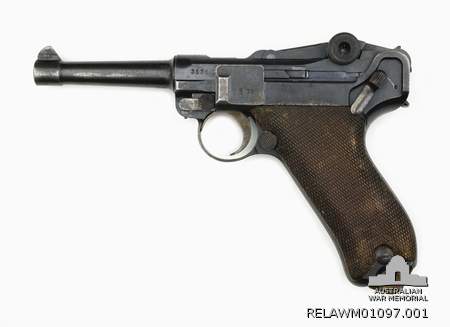 Luger P08 semi automatic pistol. Frame marked ERFURT 1911 and the serial number. The grips are checkered wood and it is complete with a magazine. The backstrap has a 'T' section slide to take the detachable shoulder stock. The trigger spring and firing pin are missing.

This German Luger pistol was handed into the Australian War Records Section (AWRS) in Melbourne by Captain Albert Jacka, who had served with 14 Battalion, Australian Imperial Force (AIF). Jacka won the first Victoria Cross awarded to a member of the AIF during the First World War when he recaptured a section of trench during a heated battle against the Turks at Courtney's Post, Gallipoli on 19 May 1915. The following year on the night of 6 & 7 August he was awarded a Military Cross when, from behind enemy lines, he led his platoon in rescuing Australian prisoners while inspiring other units to counter-attack and recapture the line. For the action in which the pistol was captured, Jacka was awarded a Bar to his Military Cross. The incident occurred early on the morning of 9 April 1917, during preparations for the first battle of Bullecourt. Jacka and Lieutenant Bradley of the 16th Battalion were laying tapes for the infantry jump off point when Jacka noticed a German officer and his orderly patrolling the area. Realising that the Germans would soon stumble on the marker tapes, he enlisted the aid of a Lewis gunner to capture them before they could raise the alarm. Confronting the Germans, who showed signs of resisting, Jacka seized the officer. With the capture of the officer the orderly dropped his rifle and surrendered. It is thought that Jacka retained the officer's pistol as a souvenir, later handing it in the the AWRS. When the German officer was brought before Lieutenant Colonel J H Peck, commanding officer of the 14th Battalion, complaining of the rough treatment that he had received from Jacka, Peck replied that 'if he had been through Jacka's hands he could thank God he was still alive.'