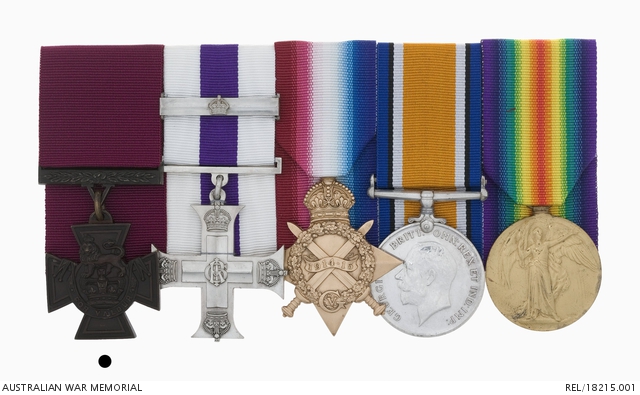 Victoria Cross awarded to Captain Albert ‘Bert’ Jacka who was born on 10 January 1893 on his parents' dairy farm at Layard near Winchelsea, Victoria. One of seven children born to Nathaniel and Elizabeth Jacka, Bert was a shy youth but nevertheless intensely competitive and gifted in sports such as boxing, cycling and football. He was working for the Victorian State Forests Department at Heathcote, Victoria when war was declared. He enlisted in Melbourne on 18 September and was assigned to 14 Battalion (14 Bn), D Company, as private number 465. In November he was promoted to acting lance corporal.

The unit embarked from Melbourne on 22 December, first training in Egypt before landing at Anzac Cove, Gallipoli around mid-morning of 26 April 1915. The battalion was stationed at Courtney's Post as part of Brigadier-General Monash's 4th Infantry Brigade. On 18 May, the post came under sustained heavy shelling following reports that Turkish reinforcements had moved into the area. This was part of a general Turkish attack across the entire Australian front to drive them back to the sea.

At around 11pm heavy fire was reported at Quinn's Post, to the left of Courtney's. At 3am on the 19th all troops were ordered to stand to for the anticipated Turkish counter-attack, which occurred an hour later when they rushed Courtney's Post beginning 'a determined charge on the part of the enemy who threw many bombs'.

During the fighting the Turks managed to capture an 11m section of the trench. Jacka was guarding at one end and kept up fire until reinforcements arrived. On their arrival he instantly shouted orders and took three others and drove at the enemy. All but Jacka were wounded in this first attempt and he was compelled to leap back into the communications trench. Regrouping, a new plan was devised whereby Jacka was provided with covering fire and two grenades were hurled at the Turks as a feint as he went around the enemy to attack from the flank.

Once in position, Jacka leapt over the parapet and single handedly engaged the enemy. In the course of the action, he shot five Turks and bayoneted two in such a determined attack that any remaining Turks fled and the trench was retaken. For his actions, Jacka received the Victoria Cross, the first awarded to a member of the AIF in the First World War. The citation for the award reads:

'For most conspicuous bravery on the night of the 19th-20th May at Courtney's Post, Gallipoli Peninsula. Lance Corporal Jacka, while holding a portion of our trench with four men, was heavily attacked. When all except himself were killed or wounded, the trench was rushed and occupied by seven Turks. Lance Corporal Jacka at once most gallantly attacked them single-handedly and killed the whole party, five by rifle fire and two with the bayonet.'

He was promoted to corporal on 28 August 1915 and company sergeant major on 14 November. Following officer training in Egypt, Jacka was commissioned a second lieutenant in April 1916.

Back in Australia Jacka was quickly gaining celebrity status, and received a prize offered by Melbourne businessman John Wren to the first Australian VC recipient of a gold watch and £500. His popularity also embroiled him in an increasingly vitriolic debate on Conscription. Compulsory military training had been in place since 1911 for domestic service, however, the decline in wartime volunteers prompted the government to debate an expansion of the policy to include service overseas.

The debates led the then Attorney General, William Morris Hughes, to proclaim in mid 1915 that ‘[under] no circumstances would I agree to send men out of this country to fight against their will’. By the following year support for the war had declined and recruitment fell off alarmingly prompting Hughes, now prime minister, to reverse his previous stance, which deeply divided the country.

Jacka’s likeness had already been widely exploited in recruiting drives for the war effort during 1915. He was also used by both pro and anti-Conscriptionists over the months that followed. His relationship with his father, never an easy one, was sorely tested. Jacka senior campaigned vociferously on an anti-conscription platform while contemporary reports suggested Bert to be a staunch pro-conscription advocate, particularly for the second referenda in 1917.

The Victoria Cross was the first of a number of awards made to Jacka for outstanding bravery in the field. In early June 1916, 14 Bn sailed from Egypt for the battlefields of northern France. On the night of 6 and 7 August, the battalion moved up to the line near Pozieres to relieve the remaining forces of 7 Brigade. A heavy German artillery bombardment continued throughout the night forcing members of the 14th to ground including Jacka who stumbled across an old German bunker and immediately ordered his men to take cover inside.

During the night advancing Germans overran the line, though Jacka saw nothing untoward when he peered out into the darkness just before dawn. Soon after he climbed back inside, a German soldier rolled a bomb (grenade) down the stairs. The explosion maimed two Australian soldiers and galvanised Jacka into action. He raced up the stairs, firing at the German who had thrown the explosive. On the surface he was confronted with the realisation that he and his men were now behind enemy lines. Charles Bean noted in his Official History that ‘the enemy had swept past and could be seen in large numbers between [Jacka’s] dugout and the village of Pozieres’.

Jacka organised his men to break back through the German lines to the village. Before he could commit to this course of action, a member of his platoon saw a group of Australian prisoners from the 48th Battalion being marched to the rear of the German lines. With only seven able-bodied men left under his command, Jacka waited till the party was within thirty metres before jumping from the trench to engage the enemy. Many of the startled Germans threw down their weapons, convinced that a much larger body was attacking. The rest of the German party returned fire, wounding everyone in Jacka’s unit.

Despite his wounds, Jacka led the remaining five soldiers in a fierce assault on the Germans. His inspirational leadership moved the prisoners to turn on their guards. Other Australian platoons witnessed the melee and joined in the counter-attack, overwhelming the Germans and forcing their surrender. Jacka’s initial counter attack which inspired the recapture of the line was seen by Bean as ‘the most dramatic and effective act of individual audacity in the history of the A.I.F.’

Jacka was wounded seven times during the engagement and many doubted his survival. He was transferred to a London hospital where, in early September, it was incorrectly reported that he had died from his wounds. Tired of the continual attention from admirers while recuperating in his hospital bed he had told one of his visitors to inform a reporter wishing for an interview that he had died. The following day the newspaper carried the story complete with a picture. A retraction soon followed with accounts that he was ‘very much annoyed at the reports.’

On 18 August he was promoted to lieutenant. Jacka returned to his unit in November and for his actions at Pozieres he was awarded the Military Cross. He was promoted to captain on 15 March 1917 and appointed the battalion’s intelligence officer.

On the night of 8 April, in preparation for an assault on the line, Jacka, together with Lieutenants Wadge and Bradley of 16 Bn and a party of men, made a reconnaissance of the enemy’s defences of the Hindenburg line close to Bullecourt. Jacka found gaps in the wire and proceeded through alone, almost being discovered when patrolling German soldiers moved within centimetres of his prostrate form.

Returning to battalion headquarters, he reported that although the first wire was cut in places by Allied artillery barrages, the second line was almost entirely intact. Despite his misgivings of the success of the planned attack, the order to proceed was given. At 2:15 am on the morning of the 10th, Jacka and Bradley returned forward to place the jump off tapes for the infantry. When the task was nearing completion the party was almost discovered by two patrolling Germans.

When it was obvious that the Germans would detect the markers, Jacka decided that they needed to be stopped before they could report back to the German lines. He moved back to the line and enlisted the aid of a Lewis gunner when it was evident that Bradley was too far away to warn without being detected. The two Australians worked their way behind the Germans and, with pistol cocked, Jacka called ‘Halt!’

The two Germans, an officer and his orderly, hesitated but would not surrender. Jacka pointed his pistol at the officer and pulled the trigger but the gun misfired so he rushed the German and seized him. With the capture of the officer, the orderly dropped his weapon and surrendered and the two prisoners were taken back to headquarters. Complaining to Jacka’s commanding officer of rough handling, the German was told: “You may not know the identity of your captor, but can count yourself bloody lucky to be alive”.

Later, due to the unreliability and slowness of the tanks that were to support the infantry, the attack for which Jacka and Bradley had positioned the tapes was delayed, and finally abandoned until the following night.

With snow falling on the evening of the 11th Jacka realised that the tapes would be covered so he once more ventured into no-man’s land. Walking along, running the tape through his hand, he lifted it on top of the snow. At about 3am, Jacka heard the tanks approaching and took personal control of positioning them at the markers even though the area was under heavy fire and several men were killed nearby. Ultimately, the tanks were ineffectual in their support role and the attack failed, though the bravery of Jacka was unsurpassed. For his actions at Bullecourt he was awarded a bar to the Military Cross.

In May 1918, Jacka was gassed and was withdrawn from the battlefield for the final time. During his active service throughout the war, he had survived multiple wounds and continued to be a source of inspiration to those around him. Many believe that the actions for which he was awarded the Military Cross and Bar were sufficient to merit another two Victoria Crosses. 14 Bn became affectionately known as ‘Jacka’s Mob’.

Returning to Australia on 20 October 1919, Jacka was met at the quayside and paraded through the streets of Melbourne at the head of an eighty-five car convoy. He was discharged in January 1920 and soon after opened an importing business with three other 14 Bn members, Lieutenant Reginald Owen Roxburgh and Captains Ernest Leslie Edmonds and Alexander Frederick Parker. Parker’s involvement in the business was short lived and Roxburgh withdrew in 1923.

On 17 January 1921 Jacka married the firm’s typist, Frances Veronica Carey and in 1927 the couple adopted a daughter, Elizabeth Mary. The firm of Jacka Edmonds & Co prospered initially but a government increase in import tariffs to combat the effects of the Depression proved disastrous and the company went into liquidation in September 1930. In the same month he appointed mayor of St Kilda.

Twelve months earlier he had been elected to council, a difficult role in Depression era St Kilda. The effects of his war service, together with his business and civic responsibilities took an enormous toll on Jacka’s health and by the end of 1931 he was seriously ill. Suffering from chronic nephritis he entered Caulfield Military Hospital on December 18.

Jacka died on 17 January 1932, aged just 39 years and was buried in St Kilda cemetery with full Military Honours. During his funeral he was described as ‘Australia’s greatest front-line soldier’. A final testament to the character of Albert Jacka was the eight Victoria Cross recipients who acted as pallbearers at his funeral.