He kept his pledge 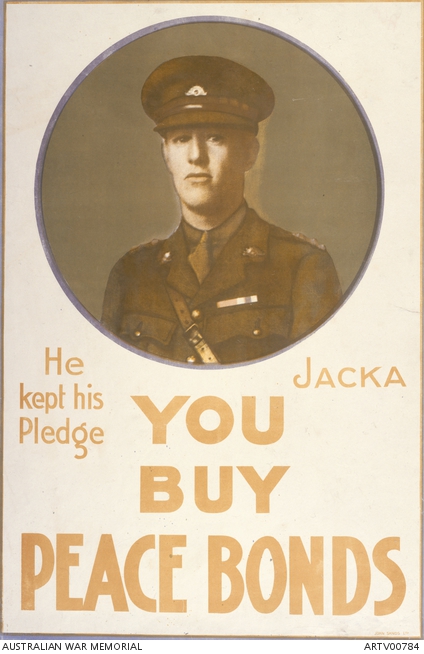 South Australian recruitment poster using the legendary status of Albert Jacka VC to help raise funds for peace bonds. A circular photograph of Jacka occupies the top half of the poster, while orange text occupies the bottom of half. A blue and orange rectangular border frames the whole.

Most countries involved in the war realised that they would need more funds to resource their campaigns, so many developed war loan programs. These programs encouraged the population to purchase government war bonds which would be repaid with interest, and assist the war effort. These loan subscriptions have been estimated to have covered 60 percent or more of the cost of the war in Germany. War loan posters were produced in great volume during the First World War. Posters often combined patriotism with notions of responsibility to inspire the populace to financially back the war. Following the war, 'Peace Loan' campaigns were launched to recoup the cost of the war and fund soldier pensions. Peace loans functioned along the same lines of the war loans, in that people 'lent' the government money in return for interest.

Captain Albert Jacka joined the AIF in September 1914 as 21-year old private and landed on Gallipoli on 26 April 1915. A few weeks later, on 19 May, he helped repel a Turkish assault at Courtney's Post. During the action he attacked a group of the enemy with his rifle and bayonet and recaptured the position. For this he became the first Australian to win the Victoria Cross in the First World War. Next year in France, as an officer at the battle for Pozières, he performed an equally bold action for which he was awarded the Military Cross. At Bullecourt in April 1917 he won a bar to his MC for further brave individual work. Jacka became known throughout the AIF for his bravery. His 14th Battalion was called "Jacka's Mob". He was wounded again near Messines in July 1917 and badly gassed in May 1918. In 1919 Albert Jacka came home to Australia, settling in Victoria where he had always lived. He went into business and did well until the Depression. He became mayor of St Kilda. Even his early death in 1932 did not diminish his status among former diggers for whom his gravesite became a place of annual pilgrimage: eight VC winners were his pallbearers.