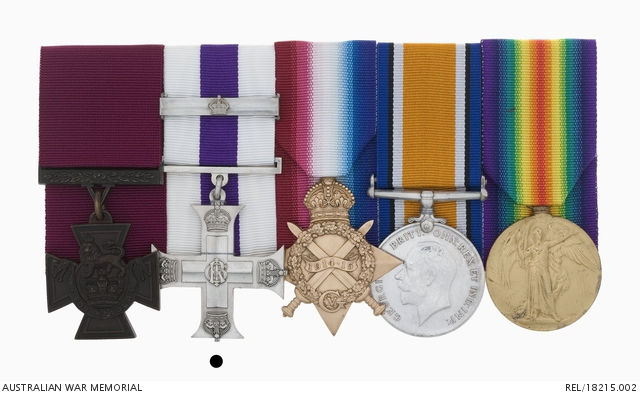 Albert ‘Bert’ Jacka was born on 10 January 1893 on his parents’ farm at Layard near Winchelsea, Victoria. He was one of seven children born to Nathaniel and Elizabeth Jacka. A shy youth, Jacka was, nevertheless, intensely competitive and gifted in sports such as boxing, cycling and football. He was working for the Victorian State Forests’ Department at Heathcote, Victoria when war was declared.

On 8 September 1914, Jacka enlisted at Heathcote. However, his enlistment papers were lost so he travelled to Melbourne and re-enlisted on 18 September. He was assigned to 14 Battalion (14 Bn) as private number 465. After initial training his unit embarked from Melbourne aboard HMAT A38 Ulysses on 22 December, bound for Egypt. Arriving at Gallipoli from Egypt on 26 April 1915, Jacka was stationed at Courtney’s Post. He was awarded a Victoria Cross for his actions in an attack on the post by the Turks on the night of 19 and 20 May.

After leaving Gallipoli, Jacka attended officer training school in Egypt. He was commissioned a second lieutenant on 19 April 1916. In late May, 14 Bn sailed from Egypt for service in northern France. On the night of 6 and 7 August, 14 Bn moved up to the line near Pozieres to relieve the remaining forces the 7th Brigade. A heavy German artillery bombardment continued throughout the night forcing members of the battalion to ground. Jacka stumbled across an old German underground bunker and immediately ordered his men to take cover inside.

During the night advancing Germans overran the line, though Jacka saw nothing untoward when he peered out into the darkness just before dawn. Soon after he had climbed back inside, a German soldier rolled a bomb (grenade) down the steps. The explosion wounded two of the Australians; in response Jacka raced up the steps, firing at the German who had thrown the explosive. At the surface he was confronted with the realisation that he and his men were behind enemy lines. Charles Bean noted in his Official History that ‘the enemy had swept past and could be seen in large numbers between [Jacka’s] dugout and the village of Pozieres’.

Jacka immediately organised his men for a break back through the German lines to Pozieres. Before he could commit to this course of action, a member of his platoon saw a group of Australian prisoners from the 48th Battalion being marched to the rear of the German lines. With only seven able-bodied men left under his command, Jacka waited until the party was within thirty metres before jumping from the trench to engage the enemy. Many of the startled Germans threw down their weapons, convinced that a much larger body was attacking. The rest of the German party returned fire, wounding everyone in the platoon.

Despite his wounds, Jacka led the five remaining lightly wounded soldiers in a fierce assault on the Germans. His inspirational leadership moved the prisoners to turn on their guards. Other Australian platoons witnessed the fight and joined in the counter-attack, overwhelming the Germans and forcing their surrender. Sergeant (later Lieutenant) E J Rule said of the scene of the encounter that ‘[e]ach Aussie seemed as if he was having a war all on his own’. Jacka’s initial counter attack which inspired the recapture of the line was seen by Bean as ‘the most dramatic and effective act of individual audacity in the history of the A.I.F.’ Jacka was wounded seven times during the engagement and many doubted his survival. He was transferred to a London hospital where, in early September, English newspapers incorrectly reported his death. Showing his renowned fighting spirit, Jacka survived and returned to his unit in November. In the interim, on 18 August he was promoted to lieutenant.

For his actions Jacka was awarded the Military Cross. The recommendation for the award reads: ‘Led his platoon against large number of enemy who had counter attacked the battalion on right and taken prisoners. He recovered the prisoners and captured about 50 of the enemy in addition. He was wounded in this attack.’ At Bullecourt the following year, his actions earned him a bar to the Military Cross. He had been promoted to captain on 15 March 1917 and was appointed the battalion’s intelligence officer. On the night of 8 April, Jacka, together with Lieutenants Wadge and Bradley of 16 Bn and a party of men, made a reconnaissance of the enemy’s defences of the Hindenburg line, close to Bullecourt, in preparation for an assault on the line. Jacka found gaps in the wire and proceeded through alone, almost being discovered when patrolling German soldiers moved within centimetres of his prostrate form. Returning to battalion headquarters, he reported that although the first wire had been cut in places by Allied artillery barrages, the second line was almost entirely intact.

Despite Jacka’s misgivings about the success of the planned attack the order to proceed was given. At 2:15 am, he and Bradley returned forward to place the jump off tapes for the infantry. When the task was nearing completion the party was almost discovered by two patrolling Germans. When it was obvious that the Germans would detect the markers, Jacka decided that they needed to be stopped before they could report back to the German lines. He moved back to the line and enlisted the aid of a Lewis gunner when it was evident that Bradley was too far away to hear a warning without being detected. The two Australians worked their way behind the Germans and, with pistol cocked, Jacka called ‘Halt!’ The two Germans, an officer and his orderly, hesitated did not surrender. Jacka fired at the officer but his pistol misfired so he rushed the man instead and seized him. With the capture of the officer, the orderly dropped his weapon and surrendered and the two prisoners were taken back to headquarters.

Later, due to the unreliability and slowness of the tanks that were to support the infantry, the attack for which Jacka and Bradley had positioned the tapes for was delayed, and then abandoned until the following night. With snow falling on the evening of the 11th Jacka realised that the tapes would be covered so he once more ventured into no-man’s land alone. Walking along, running the tape through his hand, he lifted it on top of the snow. At about 3am, he heard the British tanks approaching and took personal control of positioning them at the markers even though the area was under heavy fire and several men had been killed in nearby. Ultimately, the tanks were ineffectual in their support role and the attack failed, though the bravery of Jacka was unsurpassed.

The recommendation for the award of the bar to his Military Cross reads:
‘Distinguished conduct on the night 10/11th April/17 in the attack on “Hindenburg Line”. In his capacity as Battalion Intelligence Officer he obtained valuable information upon which the decision as to the launching of attack depended. He was instrumental in the capture of an enemy patrol. He guided the tanks to their rendezvous and personally guided and placed the Battalion in position for the attack. He showed the greatest gallantry and maintained the same splendid standard of bravery which won him the V.C. MC.’

During his active service throughout the war, Jacka survived multiple wounds and continued to be a source of inspiration to those around him. 14 Bn became known affectionately as ‘Jacka’s Mob’. Albert Jacka died following an illness on 17 January 1932, aged 39 years. At his funeral he was described as ‘Australia’s greatest front-line soldier’. He was buried in St Kilda cemetery with full Military Honours. A final testament to the character of Albert Jacka was the eight Victoria Cross recipients who acted as pallbearers at his funeral.