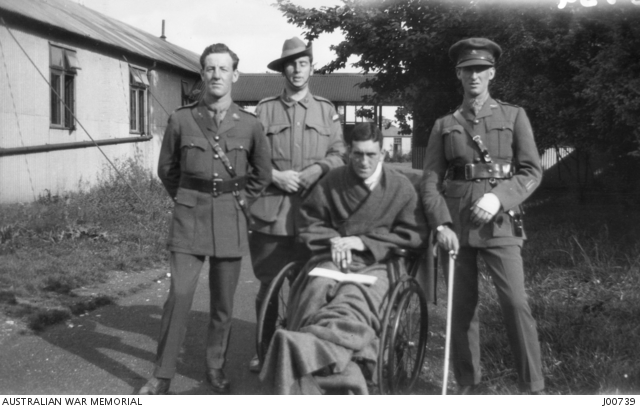 Informal portrait of 465 Corporal (later Captain) Albert Jacka VC, MC, 14th Battalion (standing left rear); 1451 Private (Pte) Elmer Glew of the 8th Battalion; Lieutenant (Lt) John Millis, 14th Battalion and Lieutenant William Robert Moodie Beamond, 14th Battalion in the grounds of the 3rd London General Hospital. Jacka enlisted in Victoria on 15 September 1914 and returned to Australia on 6 September 1919. He was the first Australian to be awarded the first Victoria Cross in the First World War for his brave actions at Courtney's Post, Gallipoli, on 19 May 1915. He later received the Military Cross (MC) for actions at Pozieres, France, on 7 August 1916 and a bar to the Military Cross on 8 April 1917 for a daring night reconnaissance at Bullecourt, France. Jacka was later elected Mayor of St Kilda, Melbourne towards the end of his life in 1932. Pte Glew enlisted on 3 December 1914; received a gunshot wound to the right eye on 25 April 1915 at Gallipoli and subsequently lost the sight in his other eye, returning to Australia on 14 January 1917. Lt John Millis enlisted on 1 October 1914 and returned to Australia on 13 February 1917. Lt Beamond was later promoted to the rank of Captain and awarded the Military Cross. From the collection of Mr Alfred Thomas Sharp. Mr Sharp was the Commonwealth Immigration Officer of Victoria and was based in the London Office during the First World War. He and his wife hosted and visited many soldiers, particularly those from Victoria, who were recuperating in London. He also photographed many Australian graves in English cemeteries. His photograph collection relating to this period in London was bequeathed to the Memorial in 1922 after his death. During his time in London he was a member of the British Volunteer Regiment, serving with the Willesden Battalion, Middlesex Volunteer Regiment.