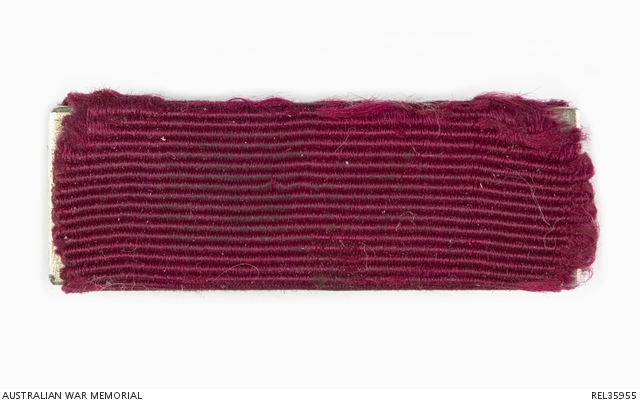 Victoria Cross ribbon bar with crimson silk ribbon and a brooch-pin back.

This Victoria Cross ribbon bar was given as a gift to Miss Gwyneth Hope by Captain Albert Jacka VC MC and bar. Hope was a volunteer nurse in England and became a good friend of Jacka's while he was recouperating from the wounds he received in May 1918. Jacka joined the AIF in September 1914 and landed on Gallipoli on 26 April 1915. A few weeks later, on 19 May, he helped repel a Turkish assault at Courtney's Post. During the action he attacked a group of the enemy with his rifle and bayonet and recaptured the position. For this he became the first Australian to be awarded the Victoria Cross in the First World War. He went on to be awarded a Military Cross for his actions at Pozieres, France in 1916, and a bar to the Military Cross at Bullecourt in 1917. Albert Jacka died in Melbourne following an illness on 17 January 1932, aged 39 years.