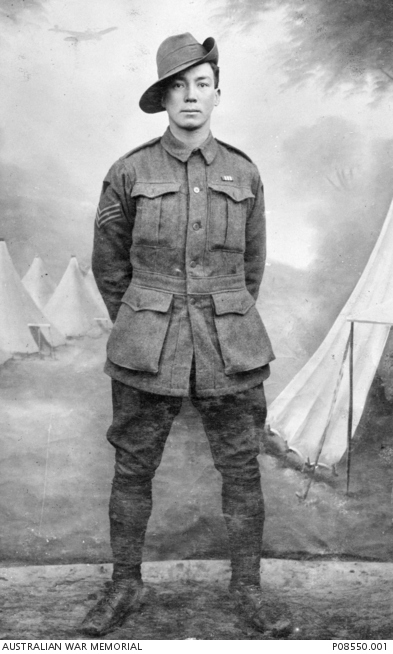 Born in 1897 in St Arnaud, Victoria, Leslie Kew-Ming was working as a bootmaker before he enlisted in the Australian Imperial Force in June 1916. His father, Kew-Ming Lok, was a Chinese immigrant from Canton; his mother, Louisa, had Chinese and Scottish parents. Kew-Ming Lok worked as a market gardener and later went on to run shops and hotels in St Arnaud. When he died, Louisa continued working in the hotels, while raising her five children.

Leslie was a skilled athlete, participating in running, cricket, and Aussie rules football.  He was also a member of the local rifle club, and had been an army cadet for over two years when the First World War broke out in 1914. Despite this experience, there were still challenges for Leslie to overcome before he could enlist.

Firstly, Leslie was only 19 years old, and the minimum age requirement for the Australian Imperial Force at that time was 21. Younger men could still enlist with parental consent however, and so Louisa gave Leslie written permission.

Secondly, those enlisting had to be “substantially of European origin” according to the Defence Act. This particular rule was one of several that discriminated against the Chinese population in Australia at the time. Despite his Chinese heritage, Leslie was accepted with the Australian Imperial Force.

In October 1916 Leslie embarked on board HMAT Borda with reinforcements for the 2nd Cyclist Battalion, arriving in England in January 1917. He was later transferred to the 23rd Battalion.

From 3 to 17 May, the battalion took part in the Second Battle of Bullecourt, after the first attempt to capture the town in April failed. This time, the allies were successful in reaching their objectives; however it came at a staggering cost of 7,482 Australian casualties. Leslie was one of the casualties, receiving a gunshot wound to his shoulder. After receiving treatment, he returned to duty on 11 May, before being promoted to lance corporal.

Several months later the 23rd Battalion joined multiple other Australian battalions in the Ypres sector in Belgium. In October, Leslie and his battalion were engaged in an offensive, aiming to capture the German positions at Broodseinde Ridge. During operations, Leslie was wounded, but continued digging a communication trench until ordered to leave. For “setting a fine example to his men”, and encouraging them to “complete the work though under heavy shell fire”, he was awarded the Military Medal. The Australians successfully took the ridge and held it despite the German artillery bombardments.

At the end of the year, Leslie was once again able to demonstrate his athletic skill, representing his battalion in a running race in Belgium, and winning a relay medal. In 1918 he was promoted to sergeant, and later sent to a training brigade in England where he worked as an instructor.

After returning home to Australia in September 1919, Leslie went back to his job as a bootmaker, and continued playing football. From 1922 he played for North Melbourne in the Victorian Football Association, although his second season was cut short due to injuries. Leslie continued with his running and won the Shepparton Gift in 1925, before winning 50 pounds prize money in a football kicking competition.

Leslie married Vera, and they had two daughters, who also showed great sporting ability. As well as coaching his daughter’s netball team and a Young Chinese League football team, Leslie continued to play football into his late thirties. Vera did not enjoy watching him play, however, due to the racial taunts directed at him from some spectators.

During the Second World War, Leslie again volunteered to serve for Australia. Although too old for active service, he became a machine-gun instructor.