Allies in adversity, Australia and the Dutch in the Pacific War: The NEI government-in-exile

After their arrival in Australia, Dutch governmental staff set about establishing offices and organisations to undertake the many administrative tasks required in addition to the work of the newly appointed Ambassador and the existing Consul-General in Sydney. Initially, there were insufficient personnel available, but eventually Dutch staff arrived from diplomatic positions in other countries and properties were leased to house them. The Netherlands East Indies Commission for Australia and New Zealand was formally created in April 1942, with offices in Collins Street, Melbourne, to look after NEI commercial interests in Australia. By mid-1943, further premises were acquired on St Kilda Road, Melbourne (where the KNIL headquarters was housed), and at 4 Mugga Way, Canberra, (the ambassadorial residence and chancellery) among others.

Communication and travel between the various offices soon became difficult and time-consuming, and a solution was urgently needed. And so in mid-1944, a new “NEI government-in-exile“ was created; it soon moved to “Camp Columbia“, at Wacol, near Brisbane. Originally built by the Australian government in 1942 for the large numbers of US troops then arriving in the country, Camp Columbia was offered to the Dutch rent-free. Eventually some 2,000 personnel, both military and civil, were based at Camp Columbia, and it remained the most important Dutch base until the end of the war. 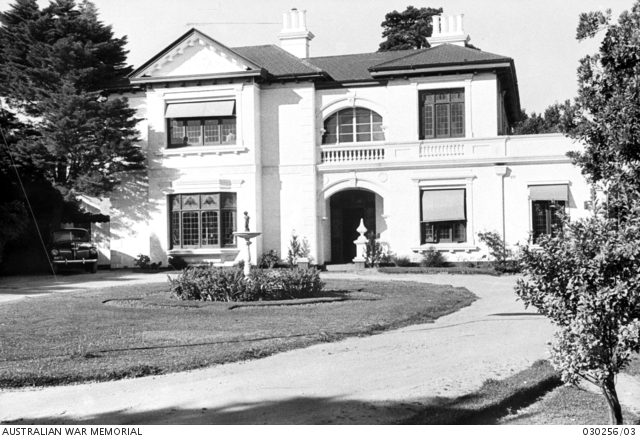 441 St Kilda Road, Melbourne. This residence served as the headquarters of the KNIL in Australia for much of the war.