Dawn of the Legend: Battles for the imagination

Back in Australia, the heroic depiction of the AIF in action, told through popular stories and romantic images, often failed to convey the gritty reality of the desperate fighting at Anzac, where troops struggled to hold every metre of ground while enduring squalor and suffering heavy casualties.

Eventually, as enlistments and casualty lists grew, the personal consequences of the fighting on Gallipoli intruded into the nation's homes. And as the campaign ground down to a dismal end, responses to the war became increasingly sober and considered. 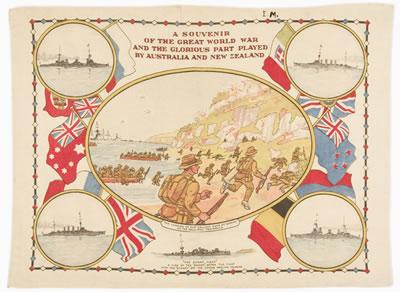 Souvenir scarves
Colourful scarves were a fashionable form of patriotic souvenir during the war. Here one celebrates the Royal Australian Navy's destruction of the German raider SMS Emden, together with a heroic depiction of the landing at Anzac. The other shows the Gallipoli peninsula and the positions of the British Commonwealth and French forces. REL/08693

The pitcure, lines of men charging forward with fixed bayonets … was fixed in our minds and never replaced when the real facts filtered back to us.