Dawn of the Legend: The failed plan

The Gallipoli campaign was intended to force Germany's ally, Turkey, out of the war. It began as a naval campaign, with British battleships sent to attack Constantinople (now Istanbul). This failed when the warships were unable to force a way through the straits known as the Dardanelles. A third of the battleships were sunk or disabled on a single day, 18 March 1915.

A fresh plan was devised: the army under Sir Ian Hamilton would occupy the Gallipoli peninsula. This would eliminate the Turkish land and shore defences and open up the Dardanelles for the passage of the navy. It would involve British troops first capturing the tip of the peninsula on 25 April, then advancing northwards. Meanwhile the Anzacs would land on the western coast north of Gaba Tepe, at a narrow point on the peninsula.

The British and Anzac forces only succeeded in getting a toe-hold on the peninsula. Over the next eight months little progress was made, and the Anzacs were evacuated in December. By January 1916 the last British troops were withdrawn, and the venture abandoned. 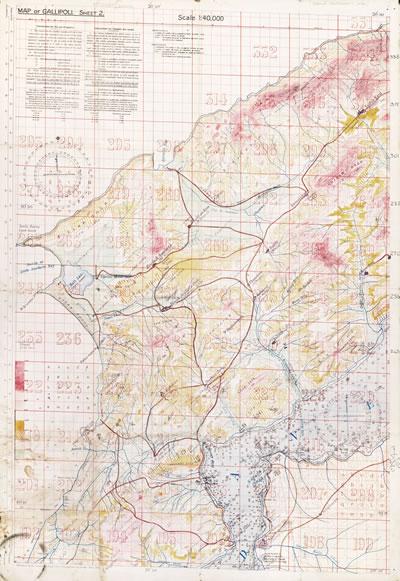 Map used at the landing
The maps available to the commanders for the landing on 25 April 1915 were barely adequate. This one was carried by Colonel Henry MacLaurin, who commanded the 1st Australian Brigade, and it bears his annotations. MacLaurin was an early casualty, killed by a sniper two days later. RC02689

Are the High Gods bringing our new Iliad to grief? At whose door will history leave the blame for the helpless, hopeless fix we are left in?