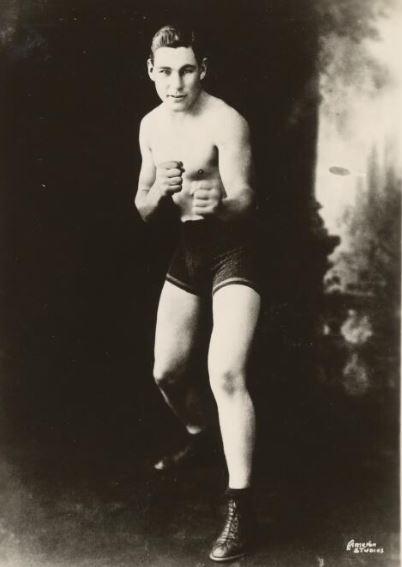 Les Darcy
Image courtesy of the National Library of Australia

Les Darcy was born in Maitland, NSW. As an apprentice blacksmith, he began boxing at the age of fourteen, and within five years he had won the Australian middleweight title and become a contender for the world middleweight crown.

While most other sport was amateur, boxing was heavily promoted and there was money to be made. Young Darcy's boyish personality and outstanding ability made him a national sporting hero, particularly among the Catholic-Irish working class population.

Darcy was vilified by some for not enlisting in the war and was denied a passport to go to the US to fight for the official world title. On the eve of the 1916 conscription referendum he stowed away on a ship bound for New York.

Soon after his arrival, the US was also caught up in war fever. Darcy volunteered for the US Army to avoid further criticism and began training for the world title, but he collapsed and was found to be suffering from a badly infected tooth. The infection spread to his bloodstream and he died on 24 May 1917, aged just 21.

Criticism had faded when Darcy's body arrived home for burial. As with so many other young Australians during the war years, Darcy's death represented promise unfulfilled.