Saddam Hussein came to power in Iraq in 1979, the same year the Shah of Iran was overthrown. During the 1980s, as Iraq fought a long, bitter war against Iran, the West supported Saddam as a moderate bulwark against the spread of fundamentalist Islam.

By 1988, however, when the Iran–Iraq war ended, the Iraqi economy was in ruins and the West was turning away, repelled by Saddam’s use of chemical weapons against both Iran and his own Kurdish population in the north. Saddam’s answer, in 1990, was to invade the rich sheikhdom of Kuwait, accusing it of undermining efforts to keep oil prices high.

In the First Gulf War the United Nations authorised a United States–led coalition to eject the Iraqis from Kuwait. After the war, the UN Security Council demanded that Iraq give up its ballistic missiles and “weapons of mass destruction” (nuclear, chemical and biological weapons), along with any equipment and materials for making them. Dissatisfied with Iraqi obstruction, the Security Council maintained sanctions on most Iraqi trade throughout the 1990s.

In 2003 the United States, asserting that Iraq was still concealing weapons of mass destruction and alleging links with terrorist groups such as al Qaeda, demanded military action against the Iraqi regime. However, the Security Council did not agree: a new group of weapons inspectors were still at work, and were reporting very little in the way of prohibited weapons and materials.

Unable to obtain UN backing to overthrow the regime of Saddam Hussein, the United States pressed ahead with a “coalition of the willing”: the chief participants were the United States, Britain, and Australia. The Second Gulf War commenced on about 19 March 2003. 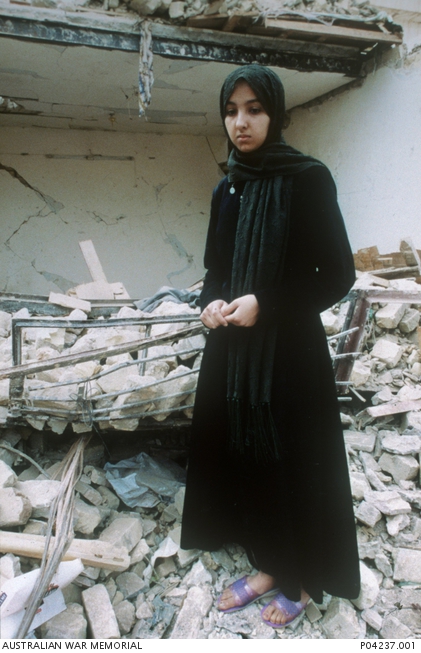 Fatin, an Iraqi girl, amid the rubble

This demonstration, which marched from the Palestine Hotel to the United Nations building in Baghdad on 10 February 2003, included members of both Moslem and Christian groups. 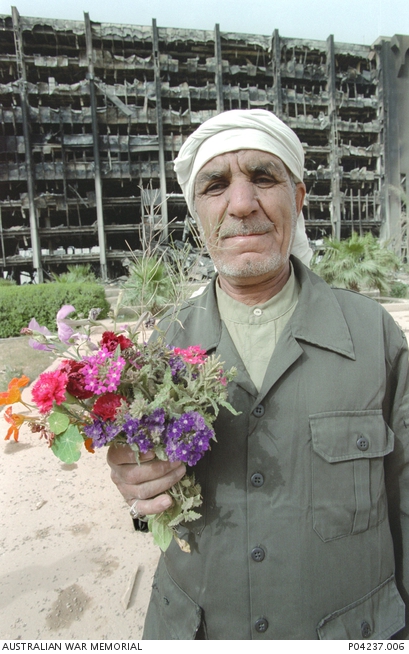 Baghdad’s Olympic Centre was reportedly used by Saddam Hussein’s son Uday as a torture centre. This man, photographed in April 2003, told George Gittoes that he had found the bodies of 23 young girls, some as young as 12, held captive in an underground area. 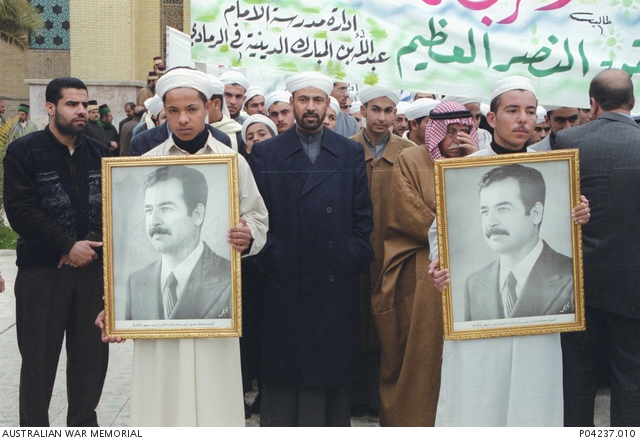 A religious demonstration protesting against the Iraqi war
George Gittoes

This demonstration, which marched from the Palestine Hotel to the United Nations building in Baghdad on 10 February 2003, included members of both Moslem and Christian groups.