Looking back: Australians on Crete -Arrival

In April 1941 the fortunes of the British Empire reached a new low in the struggle against Adolf Hitler and Nazi Germany. Greece had fallen to the Nazis, the Afrika Korps had trapped the 9th Australian Division in Tobruk, and an anti-British revolt had broken out in Iraq. Hitler’s gaze now turned to Crete .

Crete was the destination of many of the Australian, British and New Zealand soldiers fleeing Greece. The Royal Navy conducted their evacuation from Greece in its best tradition, but it was a dangerous operation. German forces pressed the escaping soldiers on the ground, while the bombers of the Luftwaffe prowled above. Not all made it. Bombers caught the Dutch transport Slamat and sunk it with a heavy loss of life.

The troops arrived on Crete exhausted, but relieved to escape. Many landed with just their rifles and the clothes on their backs, some with not even that. At first they slept in the open under olive trees, and cooked on fires using old water cans and discarded food tins. The local population also came to their aid, providing bread and wine. Gradually, the men regained their strength and an army again took shape. But their rest would not last long: the next test against the Germans was only a few weeks off. 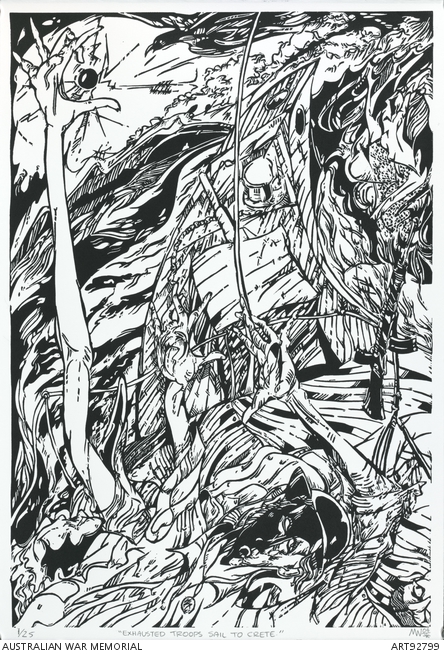 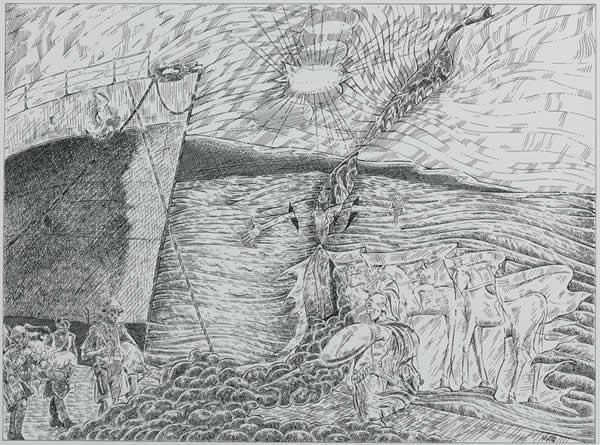 Michael Winters
The arrival of Commonwealth troops and a Roman centurion cutting the curtain of time
pen and ink on card
drawn in Canberra in 2004
50 x 36 cm
OL00475.041 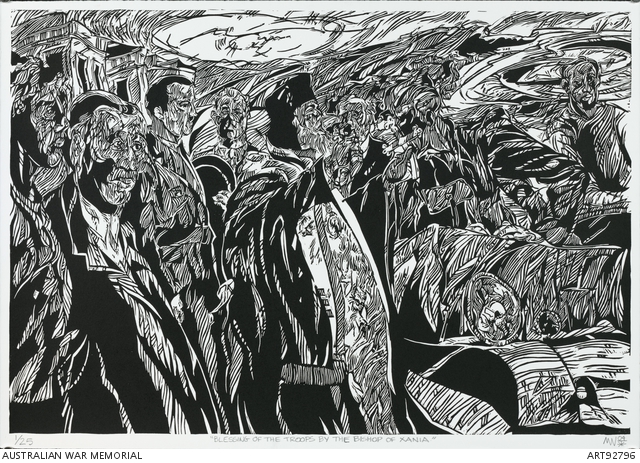 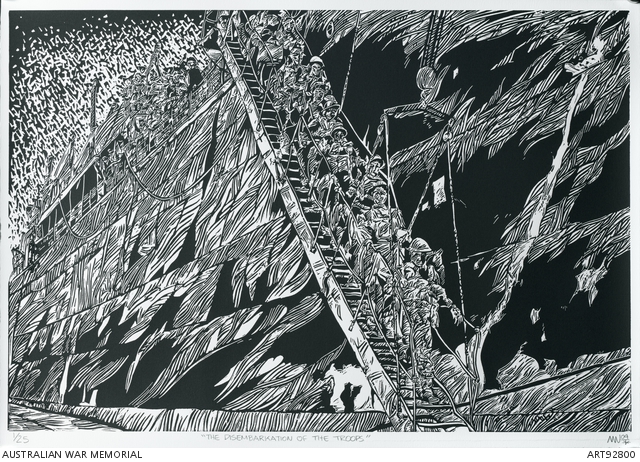 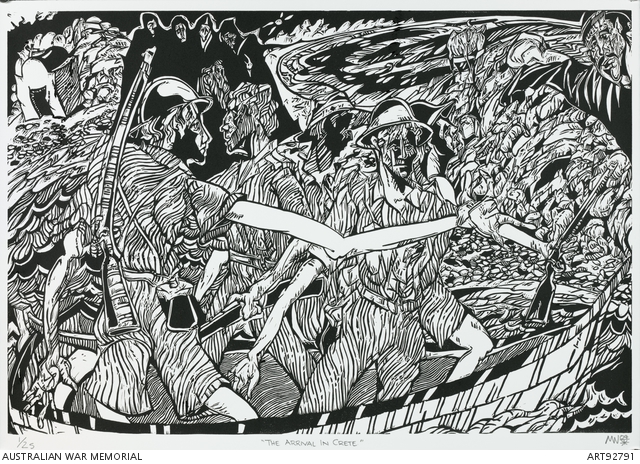 King Minos’ wife Pasiphae gave birth to a monster that was half man, half beast known as the Minotaur. Minos asked Daedalus, a skilled inventor and artisan, to build a maze at Knossos in which to hide the Minotaur. The maze was known as the Labyrinth and it was an edifice with numberless winding passages and turnings opening onto one another and seeming to have neither a beginning nor an end.
In this work Winters has likened the arrival of the Australian troops on Crete to entering the Labyrinth. It was an island with difficult terrain that due to the anticipated arrival of the German troops was dangerous to enter and would later prove almost impossible to escape from. 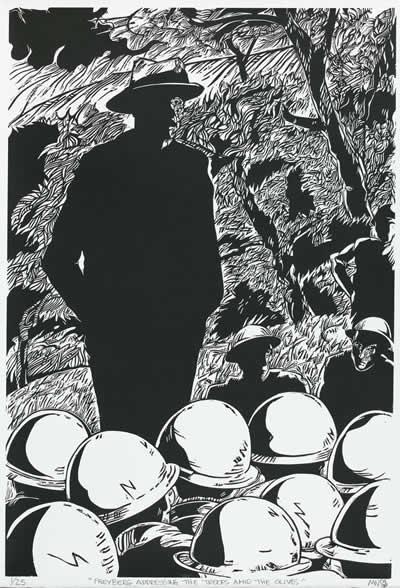 General Bernard Cyril Freyberg VC, a First World War hero, arrived on Crete with other soldiers from the New Zealand Division to find that he had been appointed as commander of the Allied forces on the island. Although Freyberg was exhausted and under resourced after the Greek campaign he was determined to inspire and encourage the Allied forces.
This work depicts Freyberg addressing the Australian troops, who were defending Rethymnon airfield, amid the olive trees. The dark silhouette of Freyberg in contrast to the light helmets of the soldiers creates an atmosphere of apprehension. 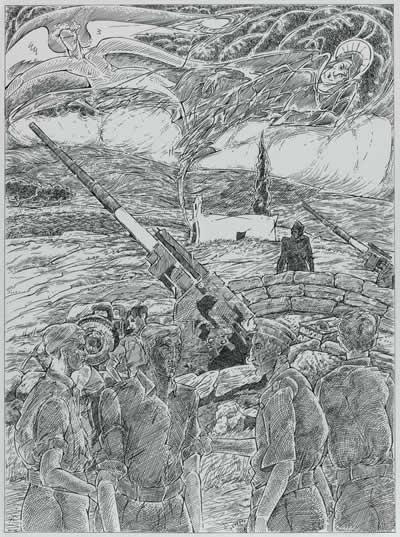 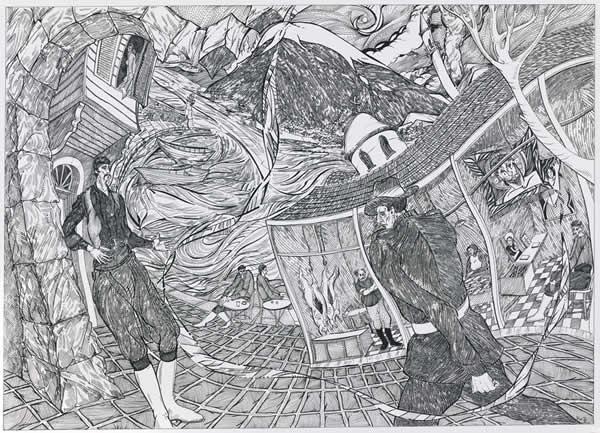 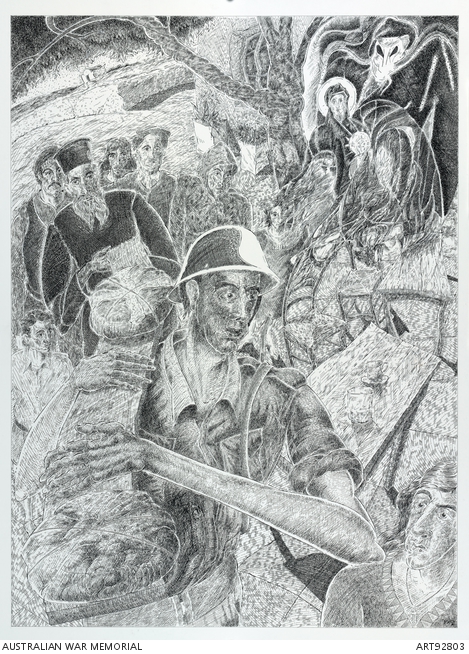 Corporal Frank Atkins of C Company 2/11th Battalion had, like the other Australian soldiers, fought in North Africa and Greece without rest and now found himself on Crete facing a new German offensive with limited weapons and supplies. As Atkins marched to Rethymnon, where his battalion was to defend its nearby airport, he saw a village in the distance and decided to search there for food. On his arrival the villagers summoned the priest who spoke English. Frank told him of his soldiers hunger and lack of food. Although the villagers had very little they encouraged Atkins to take some loaves of bread that had just been baked. As the bread was too hot to handle a villager produced a plank of wood and tied the loaves to either end in order for him to carry them. 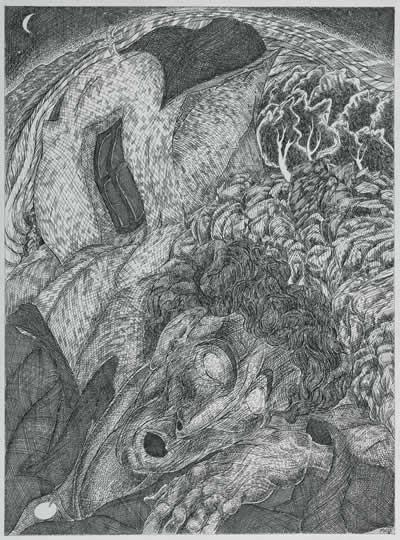