Looking back: Australians on Crete - Battle

Both the British and the Germans saw Crete, the largest and southernmost Greek island, as strategically important to their operations in the eastern Mediterranean. From their airfields German bombers could reach Britain’s vital bases in Egypt, whereas, from these same locations, the British could attack the Romanian oilfields at Ploesti, Germany’s main source of petroleum. The British also wanted to use the fine harbour at Suda as a naval refuelling base.

The island’s airfields – Maleme, Retimo, and Heraklion – as well as the naval base at Suda Bay were the keys to Crete. The British commander, New Zealander General Bernard Freyberg, had allocated garrisons to each of these positions. Each would be subject to savage air and ground attacks.

On 20 May thousands of German paratroopers and glider-borne soldiers descended upon Crete. The defenders responded with brutal and accurate fire, killing many of the enemy while in the air, and others once they landed. At Retimo and Heraklion the Australian and British defenders kept the invaders off the airfields. But at Maleme the situation facing the British was more desperate. There the Germans succeeded in securing the field from the New Zealanders. Sensing victory, German planes brought in reinforcements from the 5th Mountain Division. With each passing hour German strength grew while that of the British 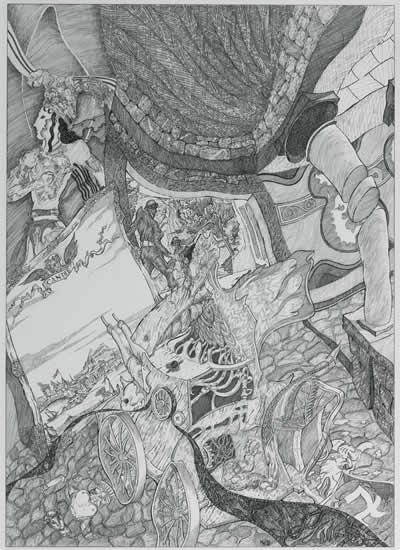 A Juggernaut, often depicted as a moving vehicle due to its links with the chariot of the Hindu Lord Jaggan-Nathji, is an overwhelming, advancing force that crushes everything in its path. A Juggernaut is a belief or institution, that elicits blind and destructive devotion or to which people are ruthlessly sacrificed. In this work the Juggernaut, which resembles a harvester, makes reference to the Australian soldiers and their greatest sacrifice for a cause, their life in the defence of their Allies. The broken temple columns are a symbol of the sudden and untimely death of the young soldiers. 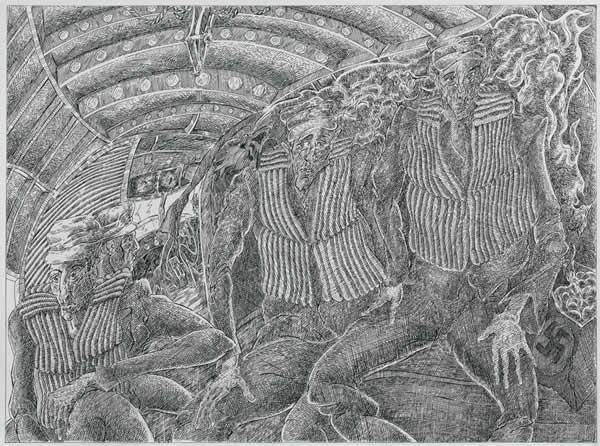 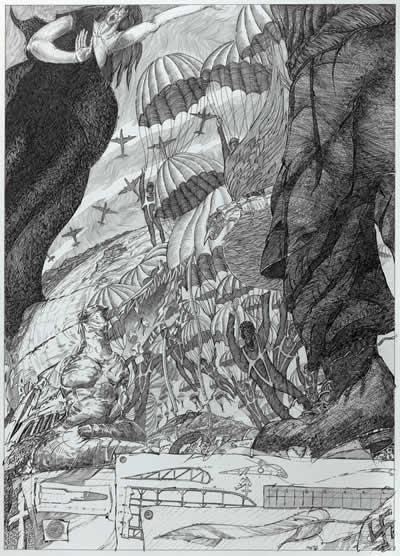 The diagrams at the bottom of this work make reference to the way in which man, through cruel ingenuity, can take a principle of nature and use it for destructive ends. Amid the German paratroopers is the figure of Daedalus, the legendary artist, craftsman and inventor in ancient Greece who designed the Labyrinth. Daedalus was imprisoned with his son Icarus on Crete by King Minos in the Labyrinth when he fell out of favour with the King. In order to escape he constructed two pairs of wings so that they could fly away. Daedalus flew safely to Siciliy however Icarus approached the sun too closely causing the wax in his wings to melt and he dropped to his death in the Agean Sea.

A scared elderly Cretan couple stand in their home as the German paratroopers begin to fall to the earth. The civilians of Crete along with the Allied soldiers were amazed by the sight of thousands of men dropping out of the sky. Many of them had never seen a paratrooper and some of the soldiers were in such awe that they put down their weapons to take out a camera.
‘I was spellbound by the futuristic nature and the magnificence of the scene before me. It wasn’t long before they were coming in along about five miles of coastline and as far as the eye could see they were still coming.’
Norman Johnstone 2/4 Battalion 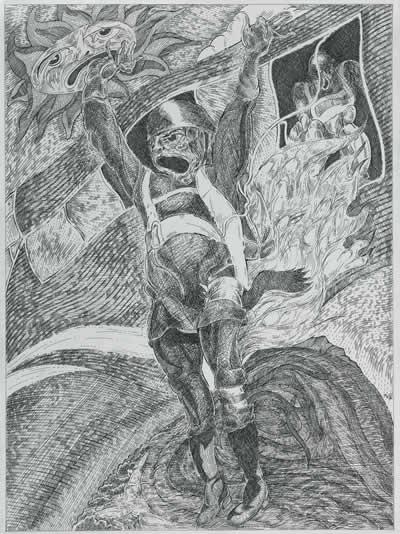 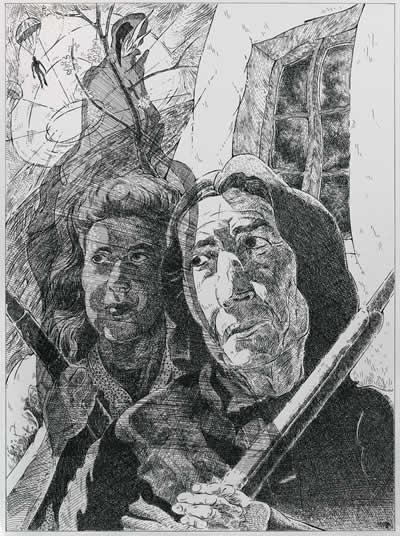 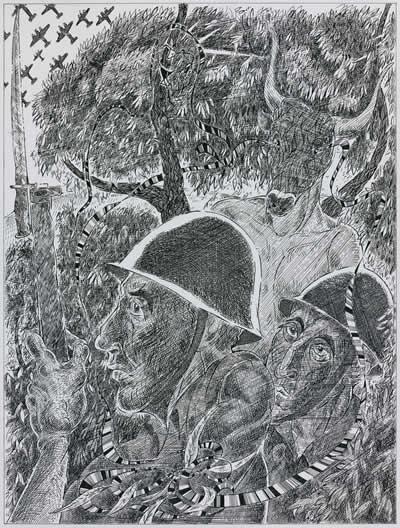 Michael Winters
Hidden among the olives, as the battle begins, under the gaze of the Minotaur and wrapped in the ribbon of time
pen and ink on card
drawn in Canberra in 2004
49.6 x 37.8 cm
OL00475.055

Greek soldiers were also fighting against the Germans in the defence of Crete alongside the Australian, British and New Zealand forces. 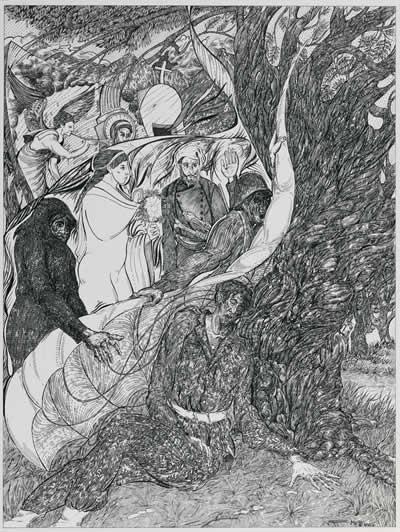 The curtain of time, symbolized by a parachute, is torn by an Australian soldier to reveal iconic mythical and legendary figures from the history of Crete. 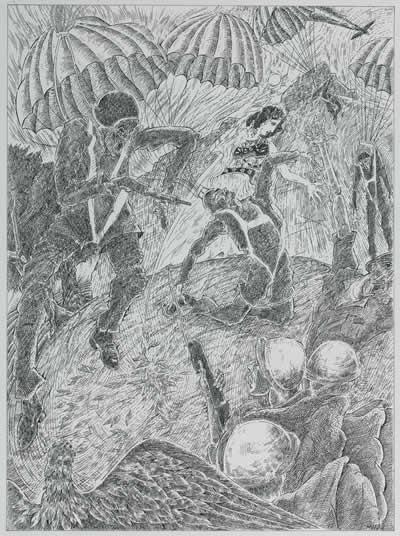 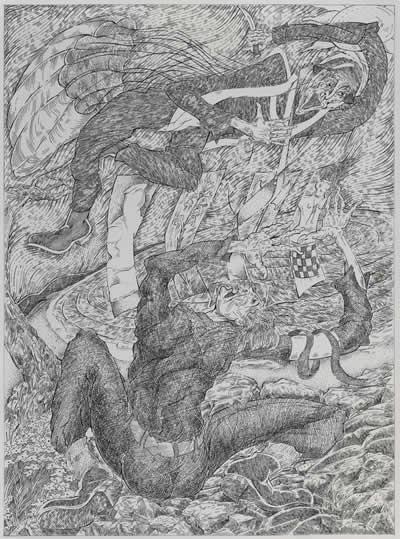 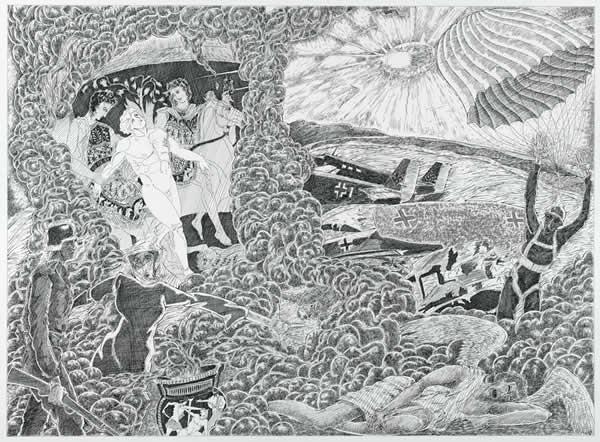 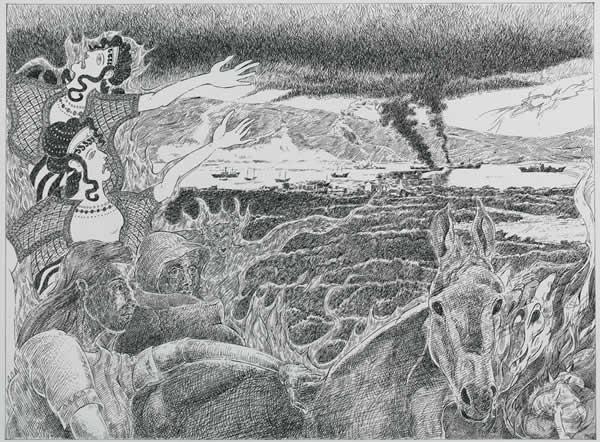 Classical Minoan women and contemporary Cretan women look out over the historically important port Suda Bay during the battle. The clouds of black smoke rising from the bombing of the Allied ships by the German’s hark back to the legendary destruction of Crete and the Minoan culture through volcanic activity. 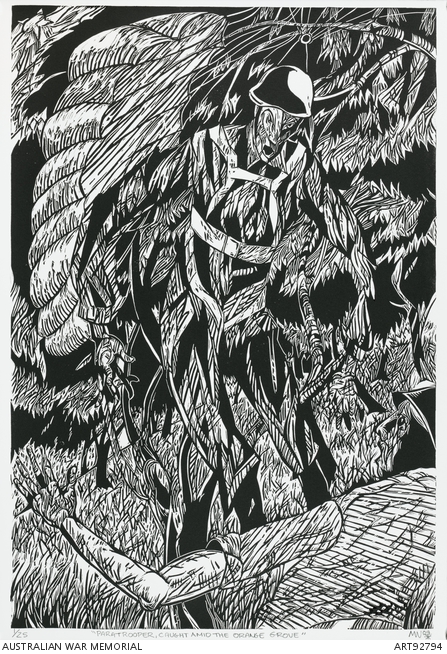 Michael Winters
Paratrooper, caught amid the orange grove
linocut on paper
made in Greece in 2002; printed in Portland, Vic in 2004
50 x 30 cm 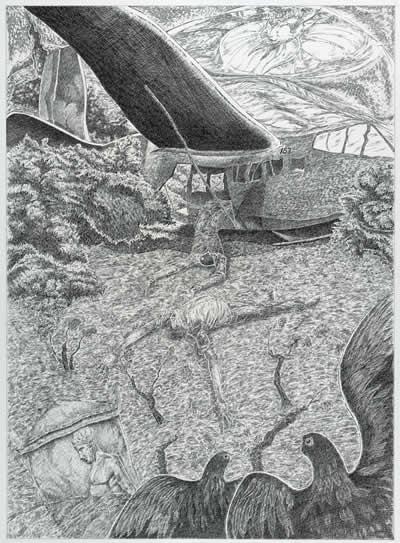 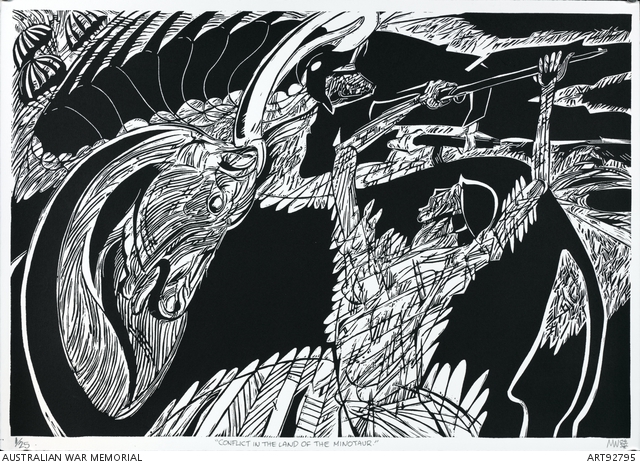 Michael Winters
Conflict in the land of the Minotaur
linocut on paper
made in Canberra in 2004; printed in Portland, Vic in 2004
35 x 50 cm

Crete was the home of the mythological Minotaur, a half man half beast. The Minotaur lived in a labyrinth and King Minos sacrificed men and women to the creature by locking them in the Labyrinth to wander around aimlessly until they were killed. Years later the warrior Theseus arrived on Crete to attempt to slay the Minotaur. Ariadne, daughter of Minos and Pasiphae, fell in love with Theseus and asked Daedalus to help him. Daedalus gave her a piece of thread for Theseus to tie on the door of the Labyrinth as he entered so that after killing the Minotaur he could find his way out. Theseus succeeded in slaying the Minotaur and escaped from Crete with Ariadne. Centuries later new warriors came to do battle in the land of the Minotaur and they added another layer to the history of Crete. 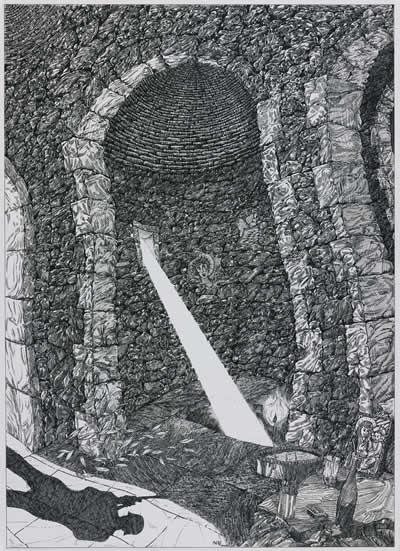 The shadow of a soldier falls menacingly across the doorway of an old church, where over time all has flaked off the walls except for the face of the Archangel Michael. The majority of the people on the Island belong to the Greek Orthodox Church and the Archangel Michael is an important and recurring figure in the religious iconography on Crete. 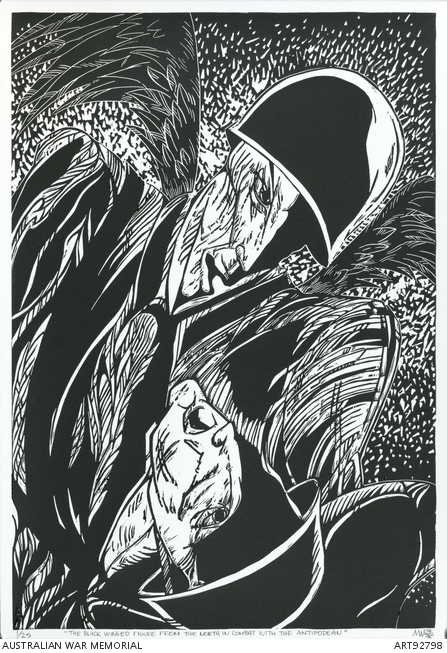 Michael Winters
The blacked-winged figure from the north in conflict with the antipodean
linocut on paper
made in Canberra in 2004; printed in Portland, Vic in 2004
50 x 35 cm 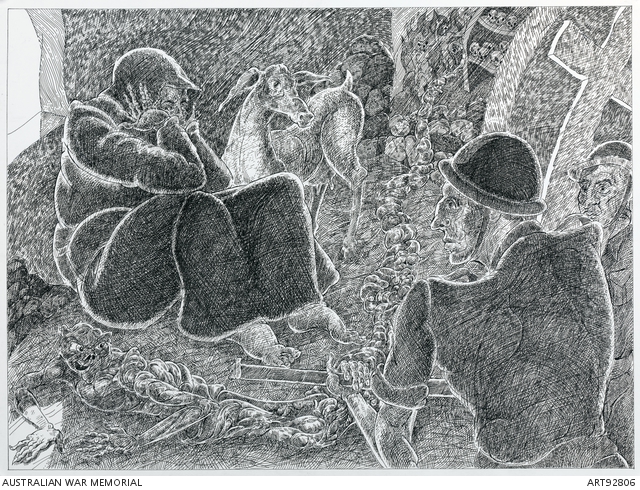 Michael Winters
Old Cretan woman in fear, her goat, the devil of old and Australian troops
pen and ink on card
drawn in Canberra in 2003
36 x 50 cm

Towards midday on Friday 22 May Captain Ralph Honner led C Company 2/11th Battalion through the vineyards, which were littered with the corpses of German paratroopers, and into the tiny village of Cesmes. In a house that had been damaged by air attacks the soldiers found a blind and elderly woman left by the other locals who had fled the village. Although they were unable to speak with her the soldiers understood how terrified she was, and gave her food, and milk from a goat that had also survived the attacks. They tethered the goat nearby and then moved on, hopeful that a villager might return to find the woman. 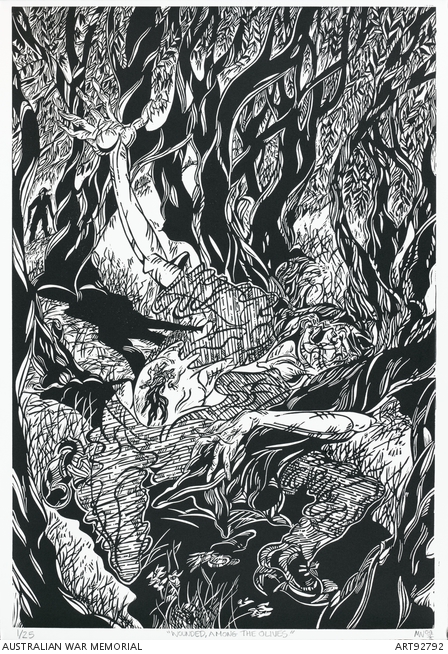 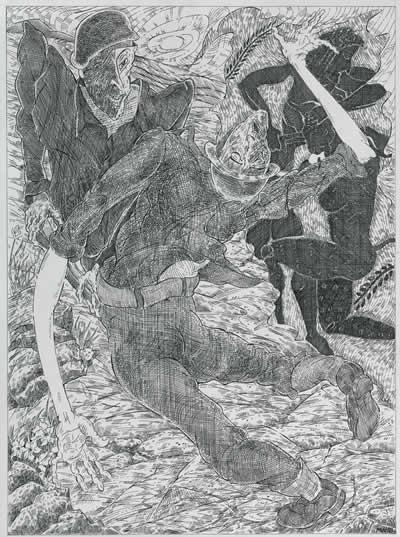 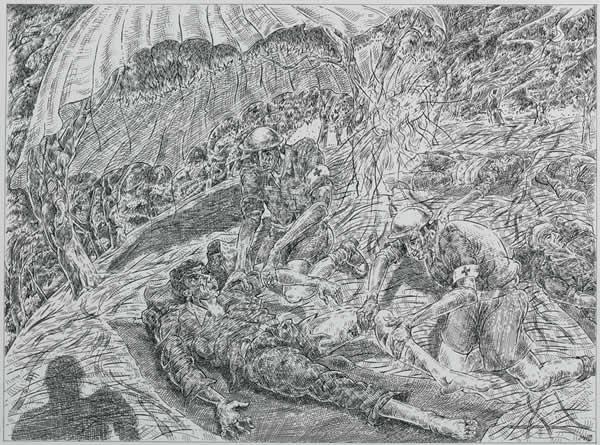 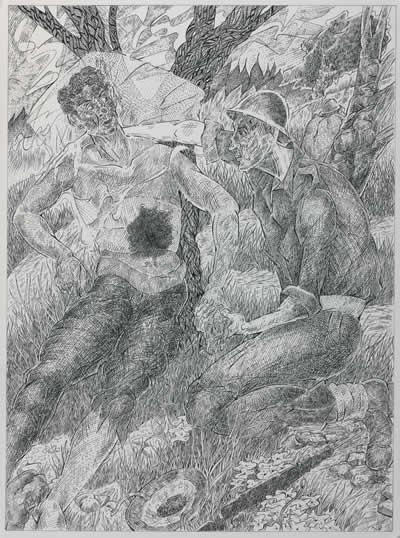 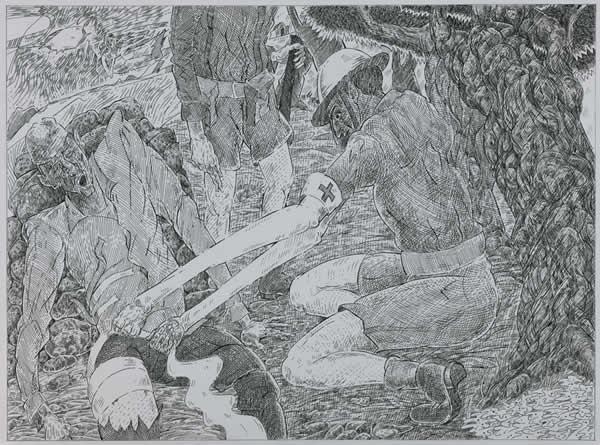 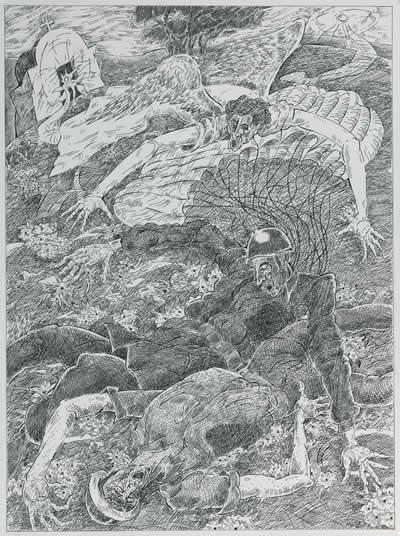 Springtime in Crete usually sees the island ablaze with wild flowers, yet the spring of 1941 saw the flowers crushed and destroyed by the intense fighting. Many of the dead lay among the damaged flowers for days before they could be buried. In this work the biblical Archangel Michael, leader of the army of God against Lucifer, is watching over a dead German paratrooper and an Australian soldier amidst a field of flowers. 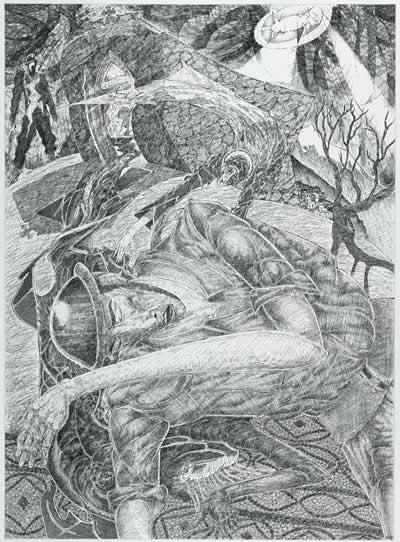 Michael Winters
The death and transfiguration of a young Australian soldier, in the old land of Crete
pen and ink on card
drawn in Canberra in 2004
38 x 50 cm
OL00475.047 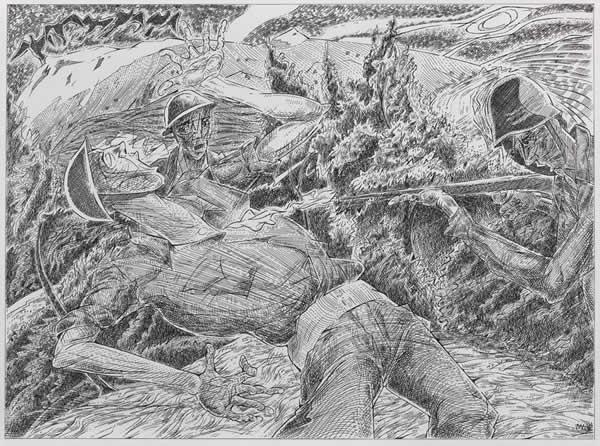 Michael Winters
The death of an Australian amid the pines, with remnants of the winter snow on Psiloritis [Mount Ida]
pen and ink on card
drawn in Canberra in 2004
38 x 50 cm
OL00475.053 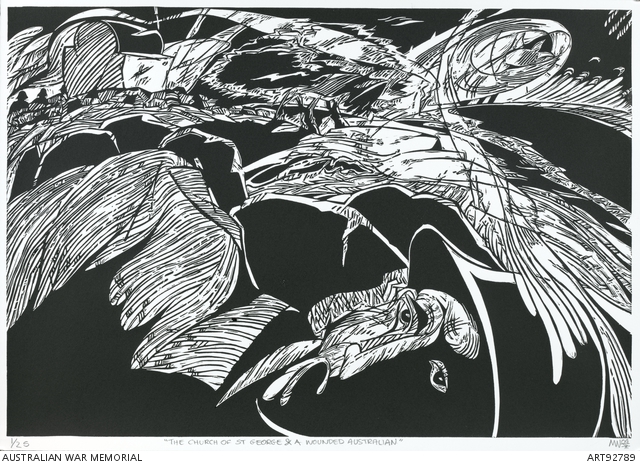 Michael Winters
The church of St George and a wounded Australian
linocut on paper
made in Canberra in 2003; printed in Portland, Vic in 2004
35 x 50 cm

The church of St George was used by the German’s as a safe house and position from which to attack the Allied soldiers. On 27 May in an attempt to take the Church and therefore destroy a threatening machine gun and observation post there were many Australian casualties. 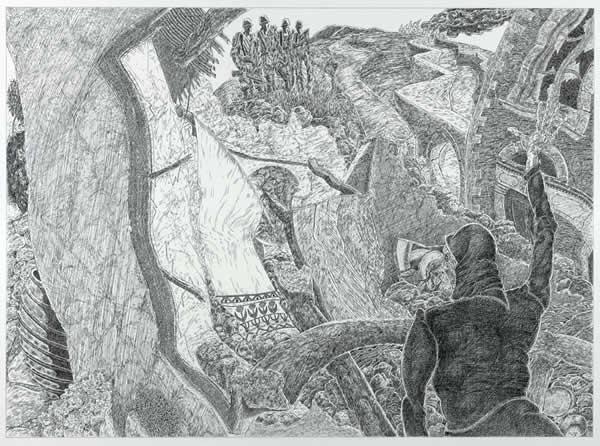