Sixty years ago in September Australian forces began a series of great offensives in and around New Guinea. Over the following six months the Japanese Eighteenth Army was overwhelmed, its units scattered when they were not eliminated. The battles took the Japanese base of Lae, cleared the Huon Peninsula and the Markham–Ramu Valley and liberated the people of those regions from Japanese occupation. The offensives gave Douglas MacArthur’s forces of the south-west Pacific a firm base from which to launch a further offensive, which from April 1944 took his forces bounding along New Guinea’s northern coast all the way to the shores of the Philippines, his real objective.

The New Guinea offensives were neither the last nor the largest battles Australian forces were to fight. (In 1945, as the war wound down elsewhere, Australia was to mount no less than six active campaigns on an arc from Bougainville in the east to Borneo in the west. The anniversaries of those campaigns will in due course be marked.) But they were among the most important, representing the central military contribution to Australia’s part in the defeat of Japan as part of the great Allied counter-offensives spanning Asia and the Pacific, from Burma to the Central and North Pacific, which destroyed the Japanese capacity to achieve victory.

Having advanced through the rugged Finisterre Ranges, these soldiers rest before continuing to the Japanese-held village of Bogodjim. C35181

The New Guinea offensives of 1943–44 were the single largest series of connected operations Australia has ever mounted. While the supreme command was, of course, American and while the campaign depended upon American air and naval support, the New Guinea battles were Australia’s own. They involved tens of thousands of troops, both in combatant units and in the massive logistic infrastructure that jungle warfare demanded.

They involved units of all three Australian services. Though the common image of Australians in the New Guinea campaigns is of a soldier in jungle green, the RAN and RAAF provided vital support. The navy protected the convoys carrying men and supplies to New Guinea and often charted the coastline on which they landed. They involved vessels of all sizes, from the Fairmile launches raiding the Japanese-held coast to the big landing ships carrying the 9th Division into the amphibious landings near Lae. The RAAF, operating as part of the US Fifth Air Force, provided both direct air support against Japanese positions and carried men and supplies in and wounded out of the battle. Virtually every type operated by the RAAF took part in the campaigns, from Boomerang artillery spotters to the Beaufighters and Beauforts providing close support, and the Kittyhawks which protected them, and the Dakotas on which transport in the islands depended. 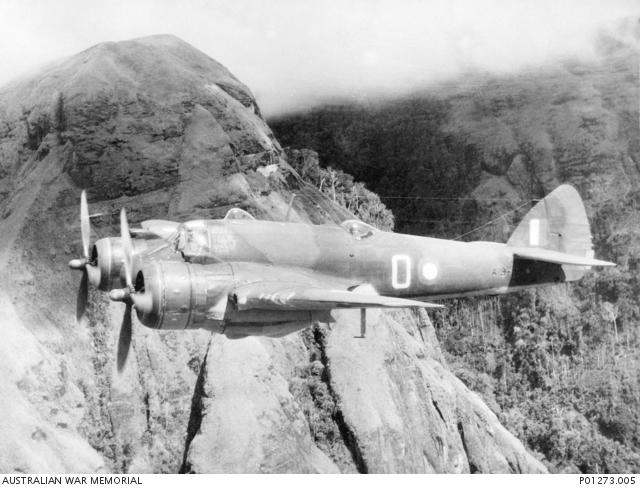 Though conducted under American direction, the New Guinea offensives were essentially planned and commanded by Australians. The Commander of the Australian Military Forces, General Sir Thomas Blamey, took a direct part in planning the campaign, and the operations were essentially directed by staff at New Guinea Force headquarters in Port Moresby and by the commanders and staff of the Australian divisions on the ground.

Blamey has been criticised as a political general, an intriguer. Whatever character flaws he displayed need to be measured against his contribution to the liberation of New Guinea. As his biographer, David Horner, shows, Blamey oversaw the development of the Australian army which fought in New Guinea and then played a key role in the direction of its crucial campaigns.

The strategy of the New Guinea offensive had indeed begun a year before. In the wake of the Papuan campaign Australian and American troops opened a campaign in New Guinea in the hinterland around Wau and Salamaua. The aim of these operations was not to secure hundreds of square kilometres of rugged jungle. It was to draw Japanese forces away from Lae. Six months later, when the Allied troops began the offensive, the “ Salamaua magnet” had weakened the Japanese defence of Lae so that the base fell swiftly and relatively easily. 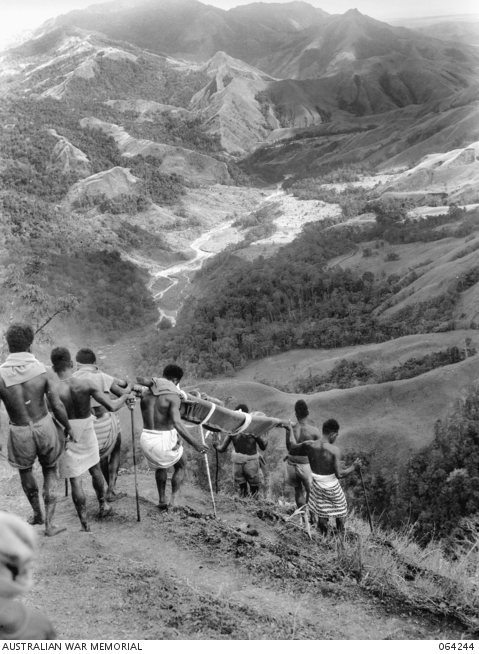 New Guinean bearers carrying a stretcher down a steep slope from Shaggy Ridge to a dressing station at Guy’s Post. In the centre of the photograph the Faria River runs into the Ramu Valley. 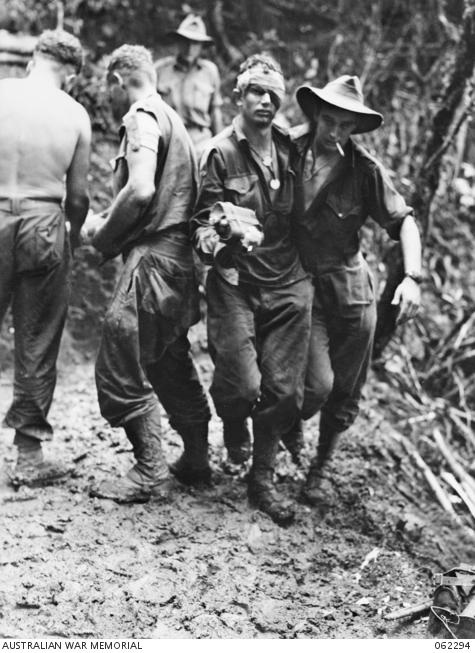 Meanwhile, the Wau–Salamaua campaign involved Militia, AIF and American troops, supported by hundreds of indigenous carriers, fighting a “battle for the ridges” at places such as Bobdubi Ridge and Mount Tambu.

The September 1943 campaign opened with two converging advances on Lae. While the 9th Australian Division landed on the coast east of Lae the 7th Australian Division (supported by American paratroops) advanced overland from the west. Then, with Lae taken, the 9th began to clear the Huon Peninsula while the 7th advanced up the Markham–Ramu Valley. Each involved hard fighting in difficult country. The 9th became involved in the long slogging fight for Sattelberg, the 7th in a similarly gruelling fight for Shaggy Ridge. Later, Militia brigades joined the advance, pursuing the beaten Japanese fleeing westward. 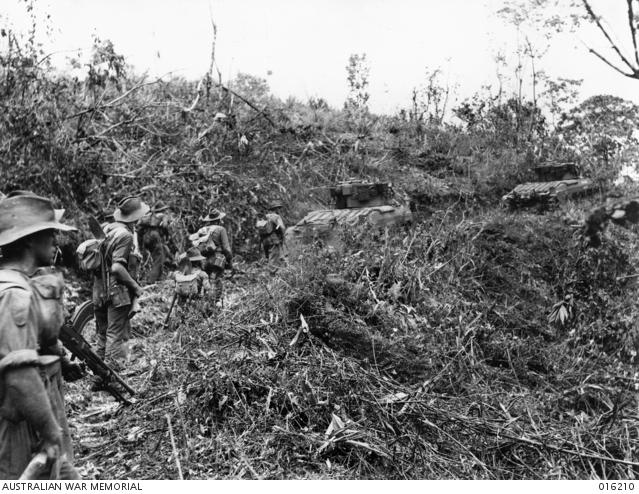 Troops move in behind Matilda tanks for a dawn attack on the Japanese-held villageof Sattelberg. This photograph was taken during the attack. C35120

The New Guinea offensives saw Australians fighting some of the hardest battles of the war.

They faced a determined and often desperate enemy. They fought in rugged terrain in an appalling climate, in which more men went down to mites and mosquitoes than to bullets. They fought in places which are now almost entirely forgotten by later generations – places such as Nadzab, Kaiapit, Kankiryo Saddle, Finschhafen and the Finisterres. They involved episodes of gallantry, courage, suffering and endurance, including the 2/28th Battalion’s celebrated crossing of the mouth of the Busu River, the 2/48th Battalion’s seizure of Sattelberg, the 2/6th Commando Squadron’s brilliant capture of Kaiapit, the unremitting attacks up Shaggy Ridge by the 2/16th, 2/14th, 2/27th (and others), and the hard slog of the 4th Brigade’s advance to Fortification Point. These, and many other actions, of the Australian forces which fought 60 years ago in New Guinea deserve to be remembered among the significant contributions that Australia made to Allied victory in the war against Japan.

Peter Stanley, Principal Historian at the Australian War Memorial, is the author of many books; his latest is For fear of pain: British surgery 1790–1850 (Amsterdam, 2003).