Wartime Issue 35 - No time for fear

I was the D Company commander in the 6th Battalion, the Royal Australian Regiment (6RAR), with 105 men plus a three-man New Zealand artillery team led by forward observer (FO) Captain Morrie Stanley. I had been in the Malayan Emergency 1955–57 with 2RAR. I migrated from 2 Commando Company to 6RAR Enoggera in 1965 and set about training my company to Special Forces fitness standards. I demanded a high standard of discipline and teamwork which I believed inspired mateship, loyalty, and confidence in individual and unit ability to perform under pressure. When we arrived in Vietnam in June 1966, the company was a cohesive team, ready to face the enemy around our Task Force Base at Nui Dat.

After a few minor brushes with local Viet Cong (VC) of D445 Battalion, we were under the impression our poorly defended base was unlikely to be attacked. The VC 5th Division had been mentioned, but the expectation was for patrol clashes. Nobody expected the VC to mortar and shell the base at about 2 am on 17 August 1966, firing from the rubber plantation at Long Tan. Our B Company was sent out to investigate.

They located VC mortar positions but no enemy. Next morning, with no threat, they sent 48 men back for leave, the day of our first concert at Nui Dat. My Delta Company was ordered out to Long Tan to take over and search for the VC, estimated at 70, thought long gone. Not real happy at missing the concert, we moved out quickly, pushing through tall grass to the sounds of the music. Arriving at 1 pm, we moved into the rubber to get to the jungle for a night base – offering better protection from attack (and mosquitoes). As B Company had been there for 24 hours, we did not expect action, but nevertheless, we set off in two-up formation, widely dispersed, alert, watching for the enemy. 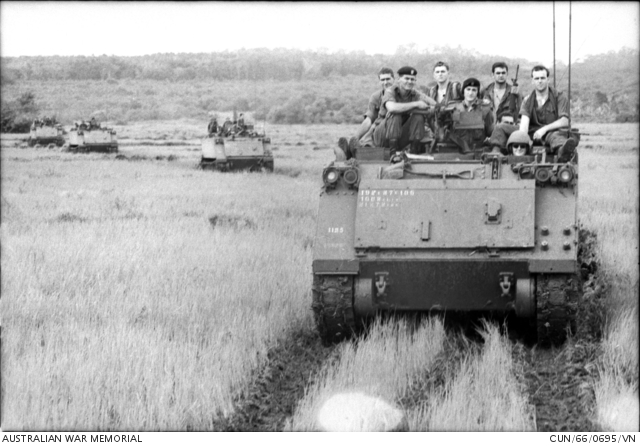 Shortly after, eight VC walked nonchalantly right into the middle of 2nd Lieutenant Gordon Sharp’s 11 Platoon. They killed one. The platoon followed up, then came under fire. Well ahead, they were pinned down and took casualties, calling for artillery fire support. 2nd Lieutenant Geoff Kendall’s 10 Platoon attacked around from the north to try to relieve pressure on 11 Platoon, but it also became pinned down. I ordered them back and sent 2nd Lieutenant Dave Sabben’s 12 Platoon out to the right to try to get to 11, whose commander and others had been killed. 12 Platoon became embroiled with another large VC group and, as with 10 Platoon, killed many.

It was pretty obvious we had run into a very large VC force. But we could not withdraw and leave 11 Platoon. I called for the whole regiment of 18 105 mm guns to be at the disposal of our FO, with six US Army 155 mm guns firing into the VC’s rear area. I requested ammunition resupply by helicopter. I also called for reinforcements by airborne insertion, and asked Major Noel Ford and his B Company to return. I requested USAF combat air support. Then the afternoon monsoonal rain started. The combat aircraft could not identify us and were directed by ATF to drop their bombs, rockets, and napalm to the east. It was more important to us to have the artillery. Then two RAAF helicopters came in over the trees and thankfully dropped the ammunition right into our lap. We were advised the only reinforcements available, A Company, would be sent out in armoured personnel carriers (APCs), not helicopters. A Company was commanded by Captain Charles Mollison.

Out of ammunition, 11 Platoon survivors managed to get back to 12 Platoon, then all withdrew back into the company area where we organised ourselves into a defensive position to fight off the VC. We established an aid post for casualties and set about repelling wave after wave of enemy attacks. With the effective machine-gun and rifle fire from my own company, plus the devastating artillery fire falling where we wanted it, orchestrated by our FO, the enemy assault waves were forced to stop, then fall back. They would reorganise and come back in with bugles sounding, clambering over bodies of dead comrades, but thanks to the courageous performance of our men in forward sections, never getting inside our position. At times we brought the artillery fire in very close, almost on top of  us. 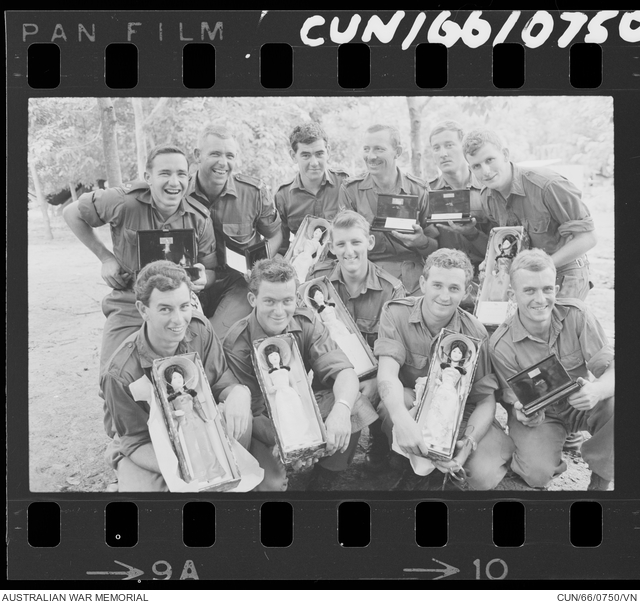 Soldiers from Delta Company, 6RAR hold the dolls and cigar cases that were presented to them by a grateful South Vietnamese government after the battle of Long Tan. C281863

The volume and noise of all the artillery and small arms fire was horrendous – deafening – but, in hindsight, wonderful music. Almost continuous VC tracer rounds lit up the gloom as they raced past us like supersonic fireflies. The heavy rain turned the earth into the mud we lay in. White latex oozed from bullet holes in rubber trees. VC snipers went up trees, to be shot or blown down. The reinforcements had been delayed in leaving Nui Dat, headquarters now fearing an attack from a VC regiment reported to the west of the base. An hour later, ATF released the small APC force comprising A Company travelling on board ten APCs of 3 Troop led by Lieutenant Adrian Roberts. Between assaults, we were able to get around and distribute ammunition, tend to wounded and better organise fields of fire linking our machine-guns. Often asked if we were afraid, I reply, “Not that I recall. We were all so busy methodically doing what we had to do we did not have time for fear – until it was over.” Everyone did what they were trained for – and did it so well we were able to repel and survive the enemy onslaughts. The dedication of my men to helping and giving covering fire to their mates and assisting the wounded was outstanding. Outnumbered, we just got on with what we had trained for – killing the enemy – to survive. Section commanders directed the fire of their men. Platoon commanders looked to overall control and directed the FO where to best place the artillery fire. My loyal company sergeant major, Jack Kirby, one of four killed in an artillery accident in 1967, organised ammunition, giving encouragement to our men as he moved around.

At 7 pm, on dark, the B Company platoon arrived, also delayed an hour. We placed them covering the south-west area, where we had engaged and put to flight numerous foliage-camouflaged VC. The intensity of the VC attacks decreased about this time. Not long after, seven APCs, some with lights on, A Company on board, arrived from the south, welcomed by the cheers of my company. The APCs had swum a flooded river, ignored orders to stop, and gallantly fought through two groups of VC on their way in, with 11 men of Lieutenant Peter Dinham’s 2 Platoon, A Company, led by Sergeant Frank Alcorta, spontaneously dismounting from one carrier, courageously taking on a large VC formation and killing many. The APCs lost one crew commander but put the VC to flight with their noise and heavy machine-gun fire.

All firing ceased as though the tap was turned off ! Three more APCs arrived, having been ordered back to the base to bring out 6RAR’s commanding officer, Lieutenant Colonel Colin Townsend, and his headquarters party. He took command. When it became obvious the enemy was not going to counter-attack, he gave orders for a withdrawal, and after midnight we were able to get our casualties out by helicopter. But we were missing half of 11 Platoon. Dazed, stressed, wet, and tired, we sat around the rest of the night in the back of APCs, nervously and anxiously pondering what was happening to our missing mates. We learnt the Task Force was to conduct a follow-up operation at dawn. I insisted on my men going back in the first lift in APCs to recover our missing and to see what damage we had done to the enemy, if they had left any signs.

Major Harry Smith briefs Delta Company in the field, 6RAR before returning to the Long Tan rubber plantation the day after the battle. C36898

Going back into the rubber, the scene was one of absolute devastation, with all the branches and leaves torn from trees, as though the area had been hit by a Category 10 cyclone. It had been hit by around 3,500 exploding artillery shells and thousands of bullets. As we reached our former position we could see many VC bodies and their weapons lying around, not having been hauled away as was their normal tactic, the mud coloured by blood. When we came upon the 11 Platoon area we found the bodies of our missing and two wounded, Jim Richmond and Barry Meller, alive, untouched by the VC. In the area where 10 Platoon dropped their packs to attack the VC, all bar one were still there. The enemy had obviously been so badly mauled they could not muster a viable ambush on the APCs, nor counter-attack our positions, and just fled, leaving many of their dead.

Then came the grisly task of burying their dead. Headquarters tallied the reports of 245 VC bodies. We found three wounded, one VC and two from the North Vietnamese battalion reinforcing two battalions of 275 VC Main Force Regiment. These plus D445 and D400 made around 3,000 enemy troops. These wounded said they were going to attack the ATF Base, with 274 Regiment to the northwest to support the attack on Nui Dat and cut off any relief column coming down from the north.

Despite what the prisoners had said, experts claimed we had been drawn out of the base and ambushed, a theory that did not hold water. B Company had sat there for 24 hours, unmolested. In later years, from captured diaries and records, and despite VC propaganda claiming they had destroyed an infantry battalion, it became established that my company had run into a reinforced regimental force waiting to attack Nui Dat. That would have been a tragic military and political disaster. While we had buried 245 and found other graves along bloodied withdrawal routes, documents indicated their losses were some 800 killed or died from wounds, with around another 1,000 wounded. Luckily for us all their heavy weapons were with the other regiment to support the attack on Nui Dat.

Treating a wounded Viet Cong in the field after the battle at Long Tan. C36489

I am very proud to have commanded Delta Company, 6RAR who gave their all on that fateful day, above and beyond what would have been expected of them. That is why my company, which bore the brunt of the battle and lost 17 killed and 21 wounded, was awarded the US Presidential Unit Citation, and was offered the South Vietnamese Cross of Gallantry Unit Citation. I am also proud and thankful to those who supported us – all the artillery, the RAAF, the USAF, the APCs, our A Company and the B Company platoon, and others.

Although nowhere near the same scale, Long Tan will be remembered alongside Kapyong, Tobruk, and Gallipoli. I am saddened by the loss of life, and the tragic loss to all the loved ones, on both sides. Like the errors of Gallipoli, a proper assessment of intelligence reports would have averted my company being sent out to face a VC regiment. But we saved the Task Force Base from what would have been a disastrous attack by the 5,000-strong VC 5th Division, and their influence in the province was reduced thereafter. That is why Long Tan has become so significant and is feted as the icon of the war for all Vietnam veterans to commemorate those lost or maimed between 1962 and 1972.