An Australian Army officer sits on an observation post, looking out over the barren land of the Golan Heights; another is on patrol in southern Lebanon, close to the Israeli border; a third works as a staff officer in the colonial splendour of the old British Governor’s headquarters and residence in Jerusalem. All three are among the 12 Australians serving with the United Nations Truce Supervision Organization (UNTSO), and they are the modern face of an Australian presence which goes back almost as far as the Korean War.

UNTSO was set up in 1948 by Count Folke Bernadotte, the Swedish UN mediator who was working to secure peace between the newly independent state of Israel and the surrounding Arab states opposing its existence. The United Nations had carved Israel and the putative Arab Palestinian state out of the old British League of Nations Mandate of Palestine. Bernadotte needed military observers to monitor a temporary ceasefire he had negotiated. A few months earlier, the United Nations had done something similar in Indonesia, and Australian observers had been the first to arrive; this time, Australians were not involved from the start and UNTSO began operation with European and American observers.

By 1956, as tensions flared between Israel and Egypt, UNTSO needed to recruit more observers. Canada and New Zealand had already joined the mission and Australia – at the time, an elected member of the Security Council – felt moved to join them. Australia sent four observers; two captains and two majors. The first arrived in Jerusalem in early July 1956. The Middle East confronted them with many contrasts. Major John Connell noted in his diary that the Lebanese capital Beirut boasted an airport which put Sydney’s to shame, and that the city was vibrant, modern, and stylish, enough to make an Australian feel quite colonial. Israel was booming, with new stone houses going up in Jerusalem, tall buildings in Tel Aviv, and kibbutzim wresting agricultural land out of the desert. Side by side with this, an Arab shepherd with his sheep looked like a scene from the Bible. 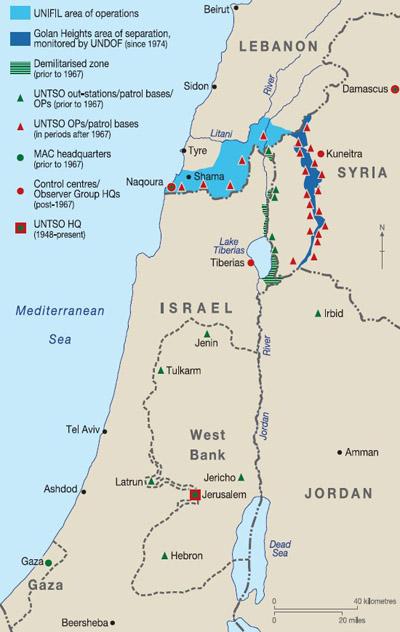 UNTSO was organised into four Mixed Armistice Commissions (MACs) which had been set up to observe and adjudicate on the armistice agreements reached after the 1948 war, one each for Israel’s border or armistice demarcation line with Lebanon, Syria, Jordan, and Egypt. In this period relations with Lebanon were fairly smooth; the other frontiers were scenes of more or less constant infiltration, raids, and reprisals, as well as disputes over the construction of new fortified positions. The situation was complicated because the new armistice lines had cut farmers off from their land and fishermen off from their water (especially those living near Lake Tiberias). There were demilitarised zones between Israel and Syria and between Israel and Egypt. Jerusalem was especially complicated: the city was divided between Israel and Jordan, with a couple of cut-off enclaves to add further tension.

The observers worked for several days at a time from outstations (see map), observing, patrolling, and investigating complaints. Their tasks could be anything from returning camels which had strayed over the armistice lines to investigating atrocities in which innocent civilians on both sides lost their lives; Israeli reprisal raids were especially heavy-handed. All too often the trail had gone cold by the time observers had a chance to investigate the scene.

UNTSO would also take a more active role in trying to broker a local ceasefire when fighting broke out. In 1958 the Canadian chairman of the Israel–Jordan MAC, Lieutenant Colonel George Flint, was killed while trying to put a stop to fighting on Mt Scopus in Jerusalem. An Australian observer, Major Basil Lott, crawled to within 20 metres of the wounded Flint, but was pinned down by sniper fire; by the time darkness fell, Flint was dead. 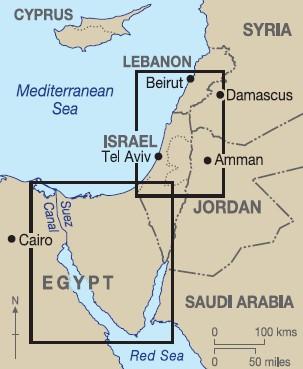 To the observers the Middle East was an exotic collection of unfamiliar cultures, yet strangely familiar at the same time. The Australians had grown up on Bible stories and on tales of the two world wars, and now found themselves amidst a host of familiar locations: Jerusalem itself, with the sacred sites of three religions, Bethlehem, the Sea of Galilee (Lake Tiberias), Beersheba, Damascus. The conflict between Jews and Arabs was modern, but the setting for it was awash with history.

A few months after the first Australian observers arrived, the Suez Crisis led to war between Israel and Egypt, and then to the Canadian-inspired creation of the first UN buffer force, the UN Emergency Force in the Sinai. Australia was keen to participate, but was not seen as neutral enough given its close ties with Britain. In 1967, there was a far greater upheaval as the Six Day War provided the opportunity for Israel to seize the Sinai from Egypt, the West Bank (including East Jerusalem) from Jordan, and a large part of the Golan Heights from Syria. Suddenly, for UNTSO, everything changed. The armistice agreements on which the MACs were based were now irrelevant and UNTSO found itself observing completely new ceasefire lines along the Suez canal and on the Golan Heights.

An Australian, Major Roy Skinner, played a key role along the canal. Skinner, commanding the Kantara Control Centre, was responsible for siting and setting up a string of observation posts (OPs) along the east bank of the canal and establishing operating procedures for the area. When Skinner arrived, fighting was still going on; over the next few months, he was kept constantly busy negotiating ceasefires as fighting repeatedly broke out up and down the canal.

Another Australian was later destined to be in charge at Kantara: Major Keith Howard took over in 1969, when fighting between Egyptians and Israelis had escalated even further. In 1967, he had helped set up observation on the Golan Heights. In 1973 he was back there, running the Control Centre at Tiberias, when a new war broke out. This war did little to alter the status quo on the ground, but ultimately it led to huge changes for UNTSO. In the Sinai, a second UN Emergency Force took over and largely assumed UNTSO’s role in the area. A few years later the Camp David accords led to Israel handing the Sinai back to Egypt and a new force, the Multinational Force and Observers (to which Australia contributes), was set up to monitor the border. 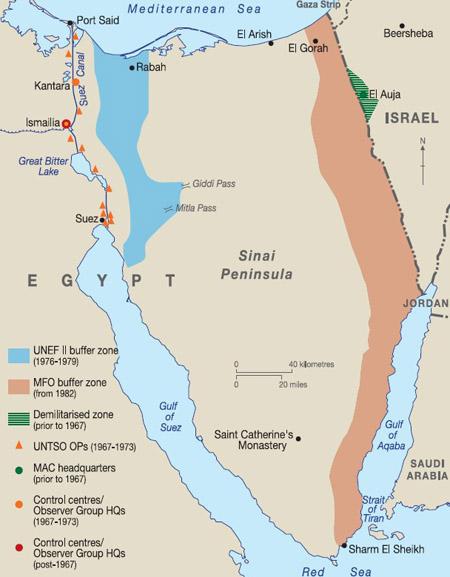 On the Golan Heights, a new UN force, UNDOF, was established to control the new demilitarised zone between the Israelis and Syrians. A few years later, following the 1978 Israeli invasion of southern Lebanon, a UN force, UNIFIL, was set up there, too. UNTSO continues to operate in both areas, working from fixed OPs and patrol bases, but the observers are now under the operational control of UNDOF and UNIFIL.

That remains the situation today, almost 30 years later. On the Golan Heights and in Lebanon, UNTSO observers work to other UN commands. A token presence is maintained in Egypt and liaison is maintained with Jordan. UNTSO headquarters remains at the stately old British Government House in Jerusalem; the city itself is now fully controlled by Israel. UNTSO has no formal role in the major conflict in the area, between Israel and the Palestinians, though Australians have served as military advisers to both the United Nations and the “Quartet”, the group of the United States, United Nations, European Union, and Russia, which is currently trying to assist the peace process.

For 50 years, Australians serving with UNTSO have been brought face-to-face with the human side of the world’s most intractable conflicts. At Magdal Chams on the Golan Heights, where Druze villagers have been cut off from friends and relatives by the lines on the ground marked out by warring armies, Australians helped the villages establish a “shouting place” to maintain contact. (It is less important now, in the age of mobile phones.) In southern Lebanon, they have watched people being attacked with rocket-propelled grenades. In the Sinai they have been feasted by local Bedouin.

Two Australians have commanded UNTSO: Lieutenant Colonel Keith Howard, as Acting Chief of Staff (as the UNTSO commander is called) in 1975, and Major General Tim Ford for two years, from 1998 to 2000. One Australian has died serving with UNTSO. On 12 January 1988, Captain Peter McCarthy was on patrol with a Canadian observer in southern Lebanon. Driving down a hill overlooking the Mediterranean their jeep hit a landmine. McCarthy was killed and the Canadian seriously injured. Today there are still 12 Australians serving with UNTSO, regular army officers generally there for a one-year tour. Typically they will spend six months in each of two locations, living in Jerusalem or Tiberias in Israel, Damascus in Syria, or Tyr in Lebanon. They spend several days at a time on an OP or patrol base, observing and patrolling with another observer (always of another nationality).

They have had to accept that serving with UNTSO does not mean solving the problems of the Middle East, but simply for a time doing what is possible to provide assurance to the parties that the international community is watching what they – and their enemies – are doing, and helping to end fighting when it does break out. With no final peace in sight, they may be on the job for some time yet.