They shot the horses – didn’t they?

I don’t think I could stand the thought of my old fancy hack
Just crawling round old Cairo with a ’Gyppo on his back.
Perhaps some English tourist out in Palestine may find
My broken hearted waler with a wooden plough behind.
No, I think I’d better shoot him and tell a little lie:–
“He floundered in a wombat hole and then lay down to die.”
Maybe I’ll get court martialled; but I’m damned if I’m inclined
To go back to Australia and leave my horse behind.

With these words one of the AIF’s best-known soldier-poets, Major Oliver Hogue (“Trooper Bluegum”), expressed what may have been a common sentiment in Palestine in 1919: that it would be better to see the mounts of the light horse shot rather than sold to the local population. Hogue may or may not have been the starting point, but since then there has persisted a common belief that light horsemen shot their horses in significant numbers so they would be spared a hard and cruel postwar existence. This belief is mistaken.

Australia sent more than 120,000 horses overseas. Of these, 82,000 went to India (although different figures are sometimes offered). Another 10,000 went to France with the infantry in 1916. The rest, 29,348 horses, were shipped to the Middle East to “horse” the AIF or other parts of Britain’s imperial armies between 1914 and late 1916. At the end of the war the Australians in Egypt, Palestine and Syria had 9,751 horses of all types and their fate quickly became an important consideration in the AIF’s demobilisation. Returning the horses to Australia was quickly ruled out, partly because of the disease threat they posed to Australia’s livestock industry. More fundamentally, returning them would cost more than the horses were worth. What, then, should the AIF do with them?

In France, Belgium and Britain, it was quickly decided to sell the horses to locals. The sales would recoup some money for the AIF and would assist with postwar reconstruction. Sales proceeded throughout 1919 – but only after assurances had been attained that French and Belgian butchers would not take the horses for their meat.

Similar sales seemed a less likely option in Egypt, where camels and donkeys were more desirable work animals, and also because, as Lieutenant General Harry Chauvel informed AIF Headquarters, there was strong opposition to the horses being sold to those of an “Eastern nationality” because Middle Eastern standards of animal treatment affronted Australian sensibilities.

In early 1919 the Australian government decided that its animals in the Middle East would be classified according to age and fitness, with the better mounts being either passed to imperial units, pooled in remount depots for later reissue or, failing that, sold. The older and unfit horses would be destroyed. Thus in February 1919 veterinary officers began examining horses: all riding horses over 12 years old, all draught horses over 15 years old, all unsound horses and those requiring more than two months’ treatment were marked for destruction.

After their manes and tails were shorn (horse hair was valuable) and their shoes removed, these horses were taken to selected spots near their camps where working parties under the command of a veterinary officer shot them with pistols. They were gutted and the skins salted (these were valuable too). 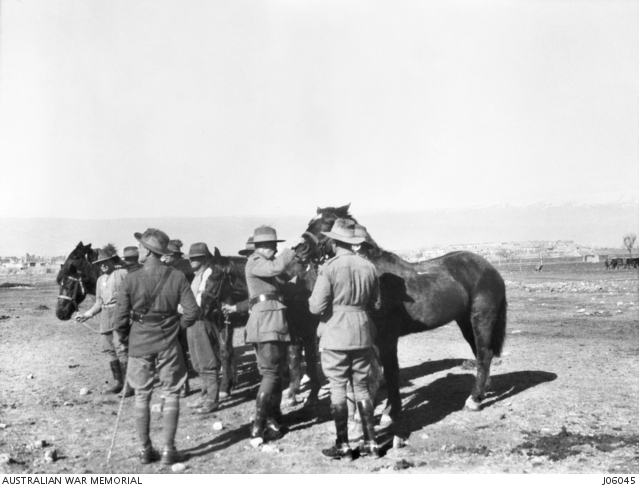 In all, 3,059 of the AIF’s horses were destroyed in this way by members of Australian or British military forces.

The fit and younger animals of the Australian Mounted Division were passed directly to the Indian 4th and 5th Cavalry Divisions, which were busy with postwar occupation duties in Syria. The surviving horses of the Australian and New Zealand Mounted Division were pooled at the imperial remount depot at Moascar in Egypt. This division’s riding horses, after a brief reissue to the AIF during the Egyptian Rebellion, which broke out between March and April 1919, were ultimately given to imperial units. There was no use for the medium and heavy draught horses locally, however, and these were shipped to France, where ready buyers were waiting.

Behind this plain bureaucratic process was a rather more heartfelt experience and there is no doubt that many light horsemen felt aggrieved that the horses would not be returned to Australia. There was much sadness and a sense of injustice, which some men no doubt carried for many years. For example, one regimental history written after the war refused to recount the event in detail because of the memories it evoked.

The military authorities were worried that men might be inclined to have their horse falsely classified and destroyed, but attentive veterinary officers made sure this did not occur. The meticulousness with which the whole program was managed – financial adjustments between the British and Australian governments were at stake – meant the chances of something untoward happening were slim. Indeed, the very complete surviving horse inventories from 1919 make it clear that units kept a very close eye on their horses. 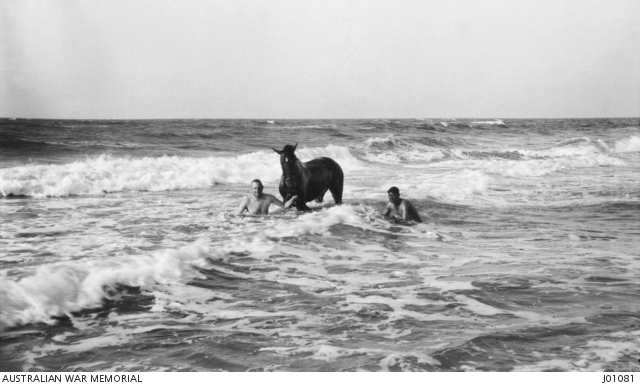 Two Australian Light Horsemen take a horse into the surf, not far from their camp at Romani, Egypt, September 1916.

So how did the idea that so many light horsemen secretly shot their horses come about? There is no clear answer, although a misunderstanding of the official process, probably tied up with hazy memories and careless telling of the real story, seems the most likely explanation. In 1946 one of the AIF’s other literary figures, Ion Idriess – never one to duck an opportunity for literary licence – wrote that many light horsemen shot their “faithful friends” rather than see then go to the “fellaheen and the Arab”. But he had been sent home in 1918, so he certainly had no firsthand experience of these events. Family lore has no doubt played its part and claims in the Duchess of Hamilton’s First to Damascus (2002) about her father taking his horse away from camp, tying a handkerchief around its eyes and shooting it seem to fit into this category. One light horseman, J.L. Grey (writing under the pseudonym Donald Black), recalled in his memoir Red dust (1931) how he took his horse, Blackboy, from camp one morning and they spent a few quiet last hours together, but then returned to camp where Blackboy joined the other horses being taken away to be shot. The only clear case of a light horseman shooting his own horse is that of Henry Bostock, who recalled the experience in his book The great ride (1982); he was detailed to work on the destruction parties and he shot his horse quite officially. 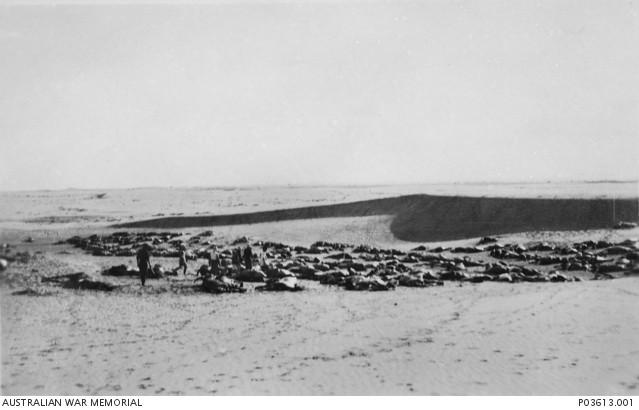 The notion that light horsemen, following Oliver Hogue’s suggestion, quietly slipped away from camp with their horse in early 1919 and then returned alone is persistent, and is one of the most often-heard stories related with the often mythologised light horse. The evidence indicates, however, that it never happened.