The sinking of Bartolomeo Colleoni

On 19 July 1940 HMAS Sydney II achieved victory over the Italian cruiser Bartolomeo Colleoni in the Mediterranean Sea during the battle of Cape Spada.

Sydney was one of three British modified Leander-class light cruisers acquired by the Royal Australian Navy in the years immediately preceding the Second World War. Her sister ships were Perth and Hobart and in Australia they were known as Perth class light cruisers. 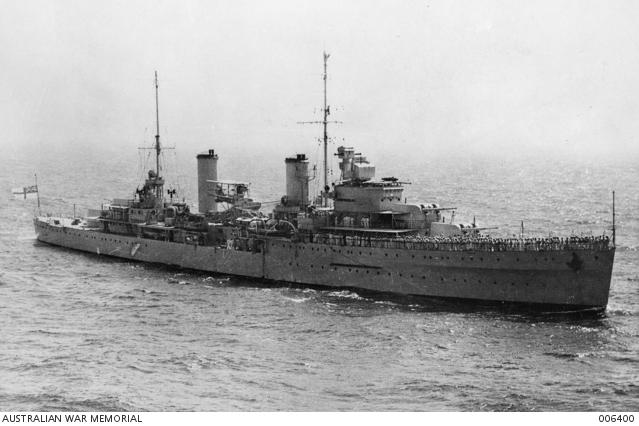 The Bartolomeo Colleoni was an Italian Giussano-class light cruiser named after an Italian military leader of the 15th century. Together with her sister ship, Giovanni dalle Bande Nere, the cruiser formed the 2nd Cruiser Division in the 2nd Squadron of the Italian Royal Navy. 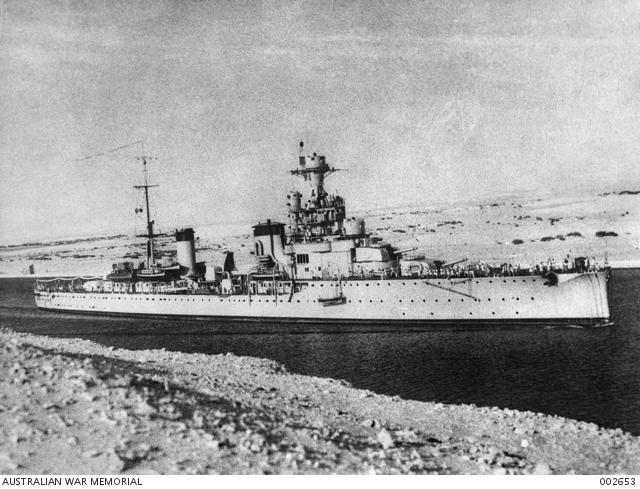 HMAS Sydney joined the Royal Navy Mediterranean Fleet on 26 May 1940 and began patrol sweeps only hours after Italy’s declaration of war on 10 June.

On 18 July Sydney sailed from Alexandria with orders to support the Second Destroyer Flotilla in the Aegean Sea. The flotilla had been tasked with intercepting Italian shipping and carrying out an anti-submarine sweep along the north coast of the island of Crete.  At the same time the Bartolomeo Colleoni was en route from Tripoli to the Aegean island of Leros accompanied by Giovanni dalle Bande Nere.

At dawn on 19 July Bartolomeo Colleoni sighted the Second Destroyer Flotilla and opened fire. At 8:20am Sydney caught sight of both Italian cruisers and eight minutes later hoisted her battle ensigns and opened fire at a range of approximately ten miles (16km). Taking the enemy by surprise Sydney scored hits on both cruisers. Attempting to retreat under the cover of smoke, the Bartolomeo Colleoni was seen to be on fire and losing headway, before coming to a complete stop. 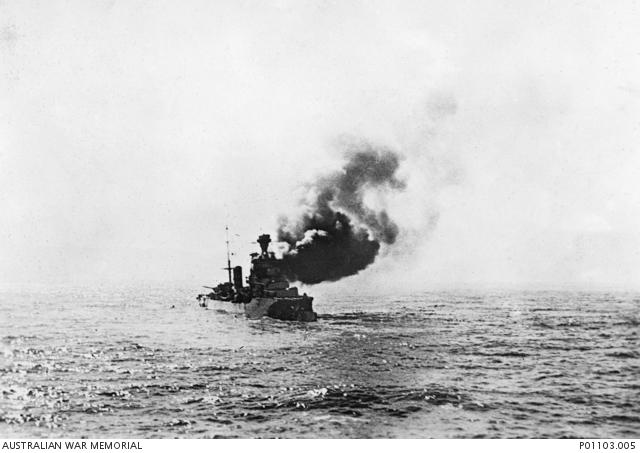 The Bartolomeo Colleoni stopped and on fire after the action off Cape Spada with HMAS Sydney. https://www.awm.gov.au/collection/C203993

Sydney had knocked out both Bartolomeo Colleoni’s boilers. The latter was then sunk by torpedoes from the British destroyers HMS Hyperion and HMS Ilex. 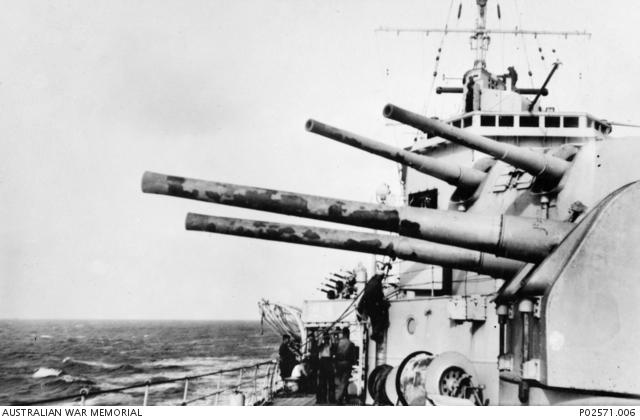 The forward 6-inch gun turrets of HMAS Sydney showing the blistered paint on the barrels from the heat of sustained firing at the Bartolomeo Colleoni. https://www.awm.gov.au/collection/C382368

Sydney sustained just one hit to her forward funnel which caused only minor damage and no serious casualties. 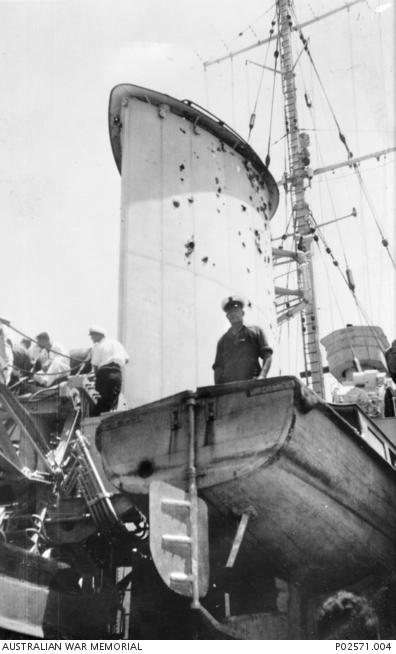 Damage to HMAS Sydney after the Battle of Cape Spada. https://www.awm.gov.au/collection/C382366 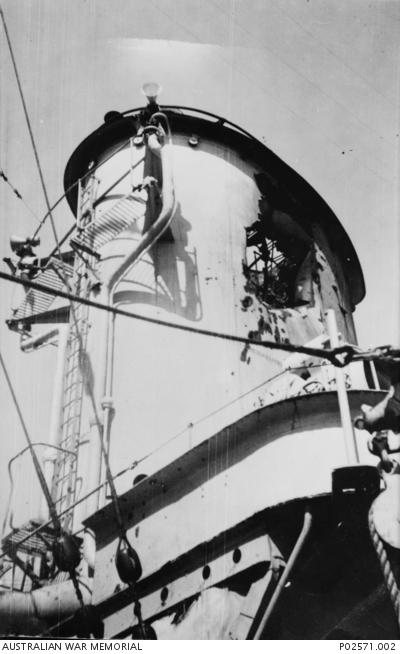 The damaged port side of HMAS Sydney's forward funnel after it was struck by a shell. https://www.awm.gov.au/collection/C382364

News of Sydney’s victory dominated Australian newspapers and upon her return home in February 1941 she received a royal welcome. Huge crowds lined Circular Quay and newspapers dedicated three days of coverage to the ship’s triumphant return. Many VIPs also assembled to welcome back Sydney, including Governor-General Lord Gowrie, the Minister for the Navy, Billy Hughes, and the First Naval Member Sir Ragnar Colvin. 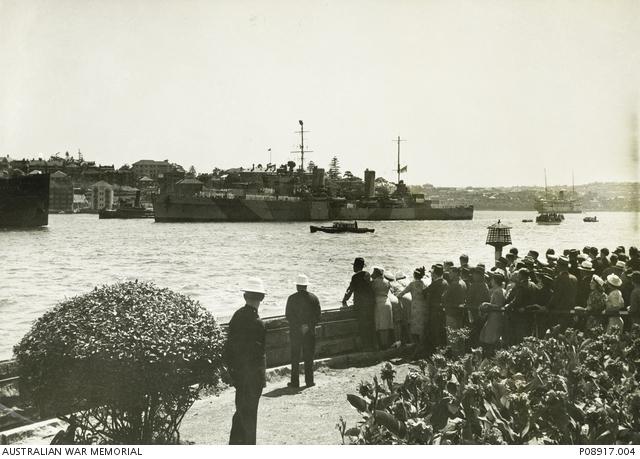 The crew of HMAS Sydney line the decks as they are greeted by a large crowd on the harbour foreshore. https://www.awm.gov.au/collection/C1246489

On Tuesday 11 February the Premier of New South Wales Alexander Mair and the Lord Mayor of Sydney Alderman Stanley Crick presented a plaque to the ship commemorating its victory over the Bartolomeo Colleoni on behalf of the citizens of Sydney. The plaque consisted of two large cast medallions mounted on oak and was affixed to the gun housing of Y turret below the sighting ports. 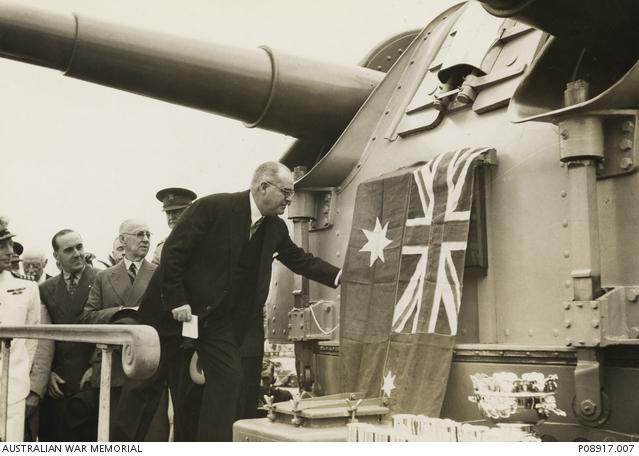 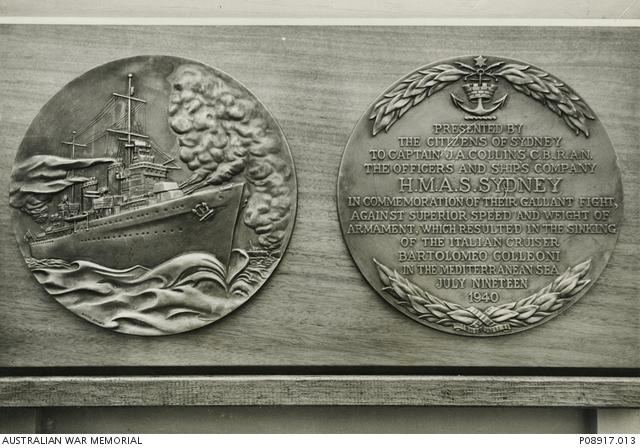 A close up of the commemorative plaque. https://www.awm.gov.au/collection/C1246498

At the forefront of the design is HMAS Sydney with guns firing while the Bartolomeo Colleoni is burning and sinking on the horizon. The reverse of the medallion is stamped “PRESENTED BY THE CITIZENS OF SYDNEY TO CAPTAIN J.A. COLLINS C.B., R.A.N. THE OFFICERS AND SHIP'S COMPANY/ IN COMMEMORATION OF THEIR GALLANT FIGHT, AGAINST SUPERIOR SPEED AND WEIGHT OF ARMAMENT, WHICH RESULTED IN THE SINKING OF THE ITALIAN CRUISER BARTOLOMEO COLLEONI IN THE MEDITERRANEAN SEA JULY NINETEEN 1940.”

With the unveiling of the plaque completed, the crew took part in a ceremonial welcome home parade through the streets of Sydney followed by a civic reception at Town Hall. 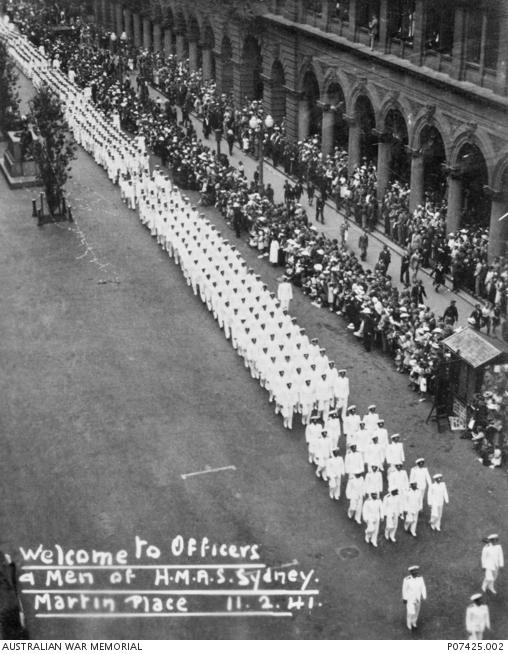 The crew of HMAS Sydney marching through Martin Place during their welcome home parade. https://www.awm.gov.au/collection/C1224940 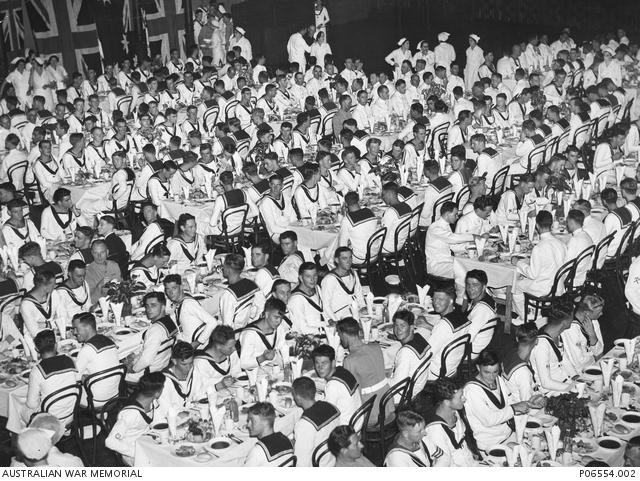 At the Town Hall reception each member of the crew was presented with a silver medallion similar in design to the commemorative plaque: 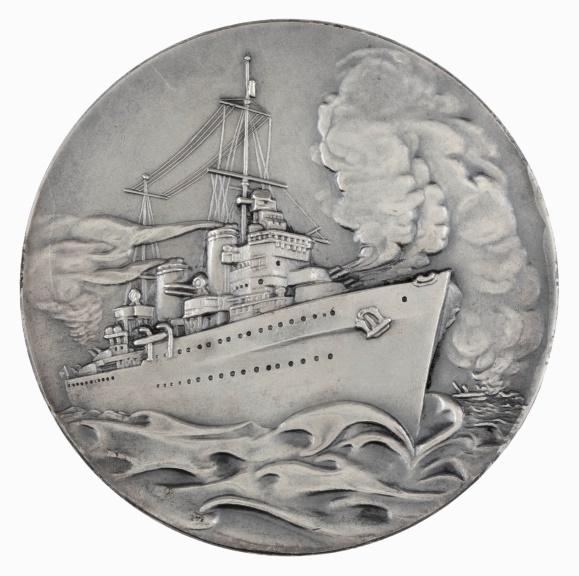 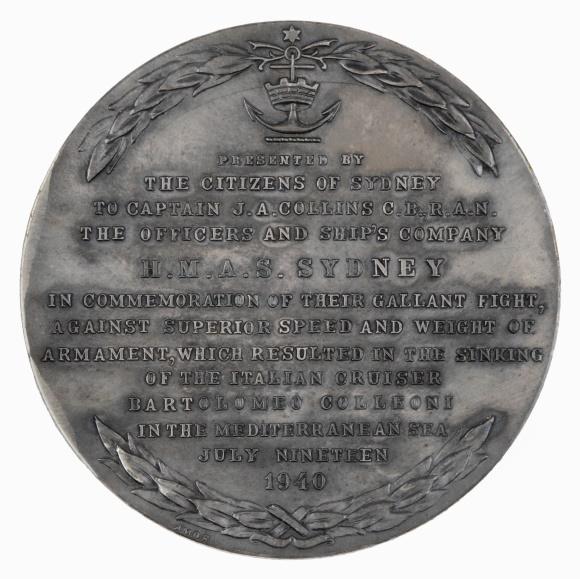 One of the medallions, recently donated into the Memorial’s collection, was presented to 20737 Leading Steward Ernest Verdun Ryding. Ryding was born in Mount Lawley, Western Australia on 18 July 1916 and joined the Navy in 1935. Becoming a Leading Steward on 1 February 1939, Ryding had served aboard HMAS Sydney from August 1937.

Shortly before Sydney was due to sail from Fremantle on escort duties, the ship’s surgeon – Surgeon Commander John Reid Hasker – sent Ryding off the ship on sick leave; suffering from what turned out to be a burst ulcer.

Only three weeks later the Sydney was lost in action after an engagement with the German auxiliary cruiser Kormoran with the loss of all her crew.

Ryding continued to serve in the Royal Australian Navy until June 1943 when he was discharged. Suffering from survivor’s guilt Ryding spent his entire life wondering what had happened to his beloved ship and his mates.  He died on 24 April 2006 – still not knowing where the Sydney was. Before his death, however, Ryding's daughter, Kerry, promised her father that if the ship was ever found, she would scatter his ashes near its final resting place.

HMAS Sydney was located on 17 March 2008, and on 19 November of that year, Kerry Ryding was able to scatter her father’s ashes during a special memorial service aboard HMAS Kanimbla commemorating the 67th anniversary of the sinking. While on board she was introduced to John Hasker, the son of the ship’s surgeon – the doctor who lost his own life in the battle with Kormoran, but who saved her father’s by sending him ashore.

She took this medallion with her on that trip and it was handed around with great reverence by all on board. No one had seen an original before; the majority of the medallions that had been presented to the crew at Sydney Town Hall were put in the Purser’s office for safe keeping and went down with the ship. 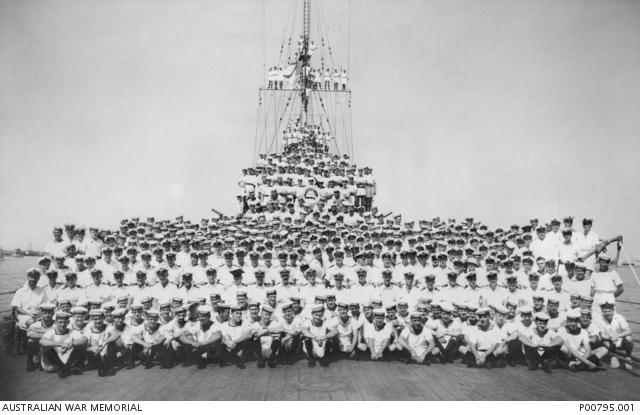 Group portrait of officers and crew of HMAS Sydney after the successful action against the Italian Cruiser Bartolomeo Colleoni on 19 July 1940. https://www.awm.gov.au/collection/C46527