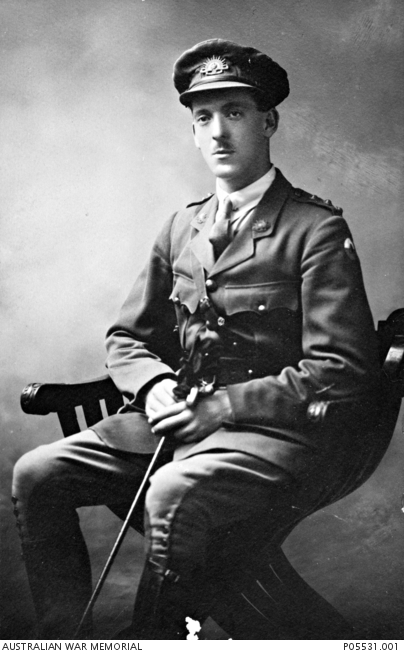 Eric Ernest von Bibra was born on 2 September 1895 in Launceston, Tasmania, the son of Eric and Jessie von Bibra. Although well-established in Launceston, the von Bibra family was directly descended from a once-powerful noble family from Bavaria, an area today known as the Free State of Bavaria, which covers almost one-fifth of the land in south–east Germany.

Nineteen-year-old Eric joined the 12th Infantry Battalion, Australian Imperial Force (AIF), soon after the outbreak of hostilities in August 1914. His leadership potential was recognised early, and within two months of enlistment he was commissioned lance corporal.

The 12th Battalion, consisting of men from Tasmania, South Australia, and Western Australia, was one of the first infantry units raised for the AIF during the First World War and arrived in Egypt in early December 1914. In the early hours of 25 April 1915, the 12th Battalion was among the first to land at Anzac Cove as a unit of the 3rd Brigade, which was the covering force for the landing.

In August 1915 Eric was evacuated from the Gallipoli peninsula with influenza. As he recovered, he fell ill again with diphtheria, and did not return to his unit until January 1916. After several transfers he was seconded for duty with the 13th Light Trench Mortar Battery in July, serving with the 4th Division in northern France.

Promoted to temporary captain and commanding the mortar battery, Eric and his unit were involved in some fierce fighting on the Western Front. After suffering enormous losses around Pozières, the Australian units, including the 13th Light Trench Mortar Battery, pushed on in an attempt to take the heavily defended German strongpoint of Mouquet Farm. On 16 August, Eric was seriously wounded, suffering severe shrapnel wounds to his hand, arm and ribs. More than a month later, while undergoing treatment in a French hospital, his condition was reported as seriously ill and it was decided that he should be moved to England.

Eric's recuperation took a long time, during which he was promoted to captain, and in July 1917, almost a year after being wounded in action, he embarked for Australia aboard the hospital ship Karoola. His AIF appointment was terminated in February 1918 and he returned to civilian life in Launceston.

Eric's brother, Elbert, also served for Australia, enlisting in May 1915. Both brothers sent letters and postcards to their mother during the war, including a handmade Christmas card. Unlike Eric, Elbert did not return home. He was killed in action on 30 September 1917 while fighting with the 47th Battalion at Westhoek Ridge.

After his return from the war, Eric von Bibra became involved in the administration of the local Returned and Services League (RSL) and in local government. He eventually became the Tasmanian state secretary of the RSL and served as the Mayor of Launceston between 1935 and 1936. In 1939 he was awarded the Order of the British Empire and became a Knight Bachelor in 1953 in recognition for his service as agent-general for Tasmania.