Gallipoli made ANZAC famous, but Australians and New Zealanders also fought side by side in the cradle of civilisation

In April, Australians and New Zealanders commemorate the birth of the ANZAC legend on a remote stretch of Turkish coastline in 1915. At the same time that men of the Australian & New Zealand Army Corps were engaged in the grim campaign on Gallipoli, the tradition of Australian and New Zealand military co-operation was also being played out at a different point in the Middle East. Only this time the men involved were aviators, not foot soldiers.

A month after the Gallipoli landing, a detachment of the Australian Flying Corps arrived at Basra, on the Persian Gulf, to join in efforts to secure Britain's oil interests in Mesopotamia (Iraq) from the threat posed by Turkish forces. On arrival the 45 Australians joined up with a smaller group of Indian Flying Corps personnel and also Lieutenant W.W.A. Burn, a New Zealand army pilot. 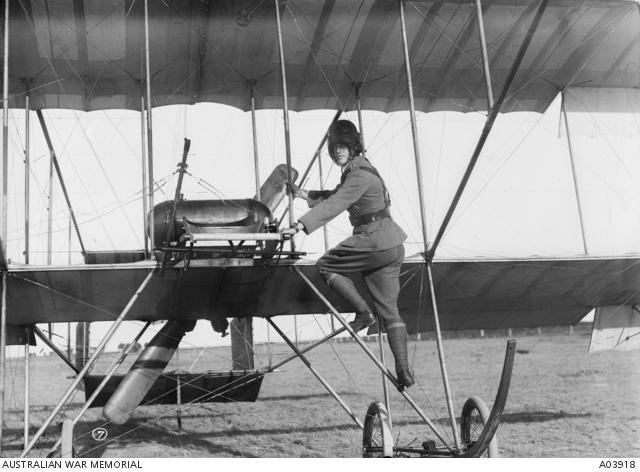 Lieutenant G.P. Merz climbing aboard a Bristol Boxkite. Merz was the first Australian military pilot to be killed in action. C37856

Burn was the only trained airman his government had available when British authorities in India asked New Zealand and Australia to raise an air unit for the campaign. He was not the only New Zealander present. One of the Indian Army pilots, Captain H.L. Reilly, originally came from Hawke Bay. Promoted to the temporary rank of major, Reilly was made commander of what became known as the Mesopotamia Flight of the Royal Flying Corps.

Ground operations began at the end of May with an advance on Amara, halfway up the Tigris River towards Baghdad. The airmen flew reconnaissance missions in support. Their aircraft were frail, primitive biplanes which an Australian, Captain T.W. White (later to become a federal government minister), described as "mere toys more suitable for a flying school than for active service". The truth of this was shown by the frequency of forced landings caused by overheated engines. 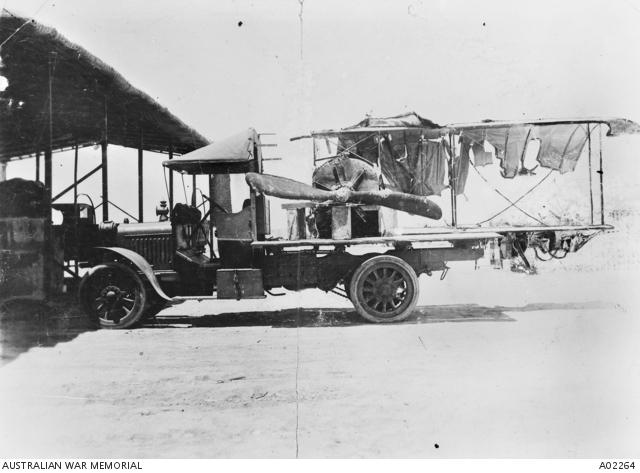 The remains of Lieutenant Merz's Caudron after it had been destroyed by hostile Arabs. Lt Merz and Lt W.W.A. Burn made a forced landing after their aircraft developed engine trouble. They were killed and their remains were never found. C37815

The crews intended to fly together and took off at 6 am on 30 July. However, they were soon separated and engine trouble forced both aircraft to make forced landings. Major Reilly and his Australian co-pilot met friendly Arabs who assisted with repairs, enabling the plane to get airborne again. The other aircraft, crewed by Burn and Australian pilot Lieutenant G.P. Merz, was not so lucky.

Reilly discovered Burn and Merz's aircraft several days later. It had been "hacked to matchwood" by Arabs, leaving no doubt that the aircrew had met a grim end. Information later obtained indicated that Burn and Merz had made a safe landing near several Arab camps and villages. These locals were hostile, however, and before the airmen could repair their engine, they were attacked.

A running fight over several kilometres had ensued as Merz and Burn fought off the tribesmen with revolvers until one of the pair was wounded. The other chose to remain with his fallen comrade and perished with him. Their remains were never recovered.

For Burn's family in Christchurch, there was more tragedy to come. The following month, Burn's brother was killed on Gallipoli.

In an odd twist to this tale, Burn was not a native New Zealander, but had been born in Melbourne. His Australian origins are not surprising when it is remembered that in 1911, five per cent of New Zealand's European population was Australian by birth.

While the Gallipoli campaign ended in evacuation at the end of 1915, the operations in Mesopotamia took a more disastrous turn. A large part of the British forces were besieged in Kut and forced to surrender in April 1916. Nine members of the Australian air detachment became prisoners of the Turks. Only two survived their captivity. By the time of Kut's fall, just one of the Mesopotamia Flight's eight original pilots was still in action.

Despite the setback at Kut, the campaign in Mesopotamia continued and gave rise to a further, little-known boost to the ANZAC tradition. The ANZAC Wireless Signal Squadron was formed in 1916 and continued until 1918, when the Kiwis were withdrawn due to manpower shortages in the New Zealand Division fighting on the Western Front. By then, of course, the ANZAC name was already famous throughout the empire.

Chris Coulthard-Clark recently joined the Military History Section of the Australian War Memorial as a historian. He has written more than twenty books on Australian military history. His latest book is Australia's military map-makers: the Royal Australian Survey Corps 1915-96.